The guitar maestro slows things down a bit on this mixed, very bluesy release.

Haworth has always managed a remarkable variety on his releases and this one again uses his deliberate scattergun template. You get a mix of boogie, blues, instrumental, ballad, reggae, hymn, traditional songs, covers, originals - and (if you’re ready for them yet) even a couple of Christmas pieces.

Haworth brings them all together beautifully by his usual impeccable playing, that friendly, warm vocal and a general mood of bluesiness. The liner booklet features the many guitars played on here and it’s very clear, when he inserts a solo, that this is what he is all about. The songs would not be the same without those six (and sometimes eight) strings.

Unusually, I was very disappointed with the first run-through of this collection. The reggae-based title track, far better than the one last time around, was OK, but failed to light my touchpaper; the lead track “Love Me Like You Used to Do” – despite some typically tasty guitar work in the middle – seemed quite dated, as did “Just a Closer Walk,” the whole thing built on a walking, ‘50s style rock and roll template, but without the energy.

Then I road tested the album on the motorway one evening – and it all clicked. I was looking for tracks to knock my socks off, as usual with Haworth, but this time, he is very much in laid-back mode. If we British had raised porches overlooking huge front gardens (and more than the occasional hot evenings), he'd be sitting there in his chair, playing on as the balmy twilight dimmed.

There are way more highlights than clunkers here. He has chosen his covers well, of course. His acoustic version of “Why are People Like That?,” with soulful backing vocals by Michelle John, sounds like it was written for him; and his take on “Denomination Blues” (a.k.a. “That’s All”) gets a distinctive Haworth approach: similarly acoustic, but with some shiny soloing overlaid.

“Dancing with the Father” stopped me in my tracks. I’ve wanted Haworth to sound like he does on career-best Sunny Side of the Street since the ‘70s and this track has that gorgeous guitar sound right at the start. Written by Wayne Drain, this one likens us to God’s kids and has us on our Dad’s shoulders, being swung around and dancing.

He has included his own songs, and two of his classic ballads make repeat appearances: a slowed right down and stripped-back “Looking through Different Eyes,” originally from Pass It On, and a lovely acoustic take on “Moments,” the last song Sandy Denny recorded before she died. Lines like “Time moves slowly, yet it goes so fast / And who knows how long our days will last?” take on an extra power, re-appearing decades on from their first outing.

He will soon have enough Christmas songs to collate into an album (please!), which I’d very much look forward to. Here he seems to have mashed both Gordon Giltrap’s “Heartsong” and his own chorus into “The Holly and the Ivy,” which works very well; while “Christmas Blues” is an honest, tongue-in-cheek approach to the madness of the season.

These two tracks feature Haworth’s strengths: blues and instrumental guitar work (the latter only getting one full workout, on “Only Believe,” a delightfully rambling slide piece). 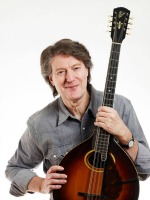 His lyrical strength is being able to present his faith naturally in his music, in ways that attract, rather than deter, secular listeners; and that easy-going, natural style is again very evident here.

While you won’t find the power and consistent song strength of excellent recent releases One Way Ticket and Time Out, there are several very fine pieces on here that you won’t want to miss out on either.