Space in Your Face - Revisited! 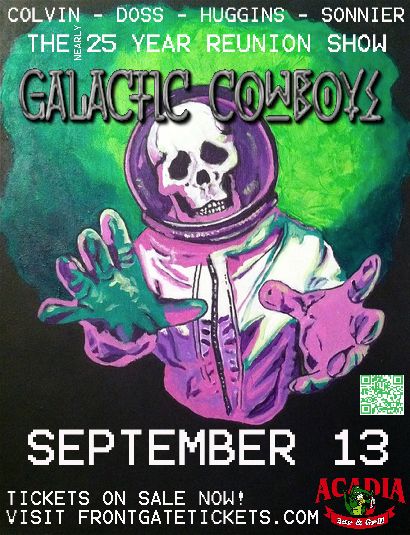 If you're like me and sick of all the scandals in the news today - don't lose hope! - for there's a faint shimmer of light on the horizon in the form of a skull crushing reunion concert. This year marks the 'almost' 25th anniversary of the great melodic metal machine out of Texas, Galactic Cowboys. 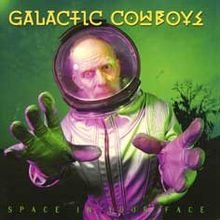 It also marks the 20th anniversary of the group's phenomenal sophomore release, Space in Your Face. The band is celebrating with an upcoming reunion show in Houston at the Arcadia Bar & Grill featuring the original line up of {Colvin-Doss-Huggins-Sonnier}

So on September 13th prepare to have your skull crushed (as Monty would say!).

In honor of this momentous occasion I'd like to revisit the aforementioned masterpiece. Here's my review of Space In Your Face - two decades later.

Track #1 "Space in Your Face" (Doss) - The tone is set with layered thrashing guitars curtousy of Dane Sonnier on this fast-paced intro. The guys are coming on strong and in your face. Check out the tasty Pink Floydish bridge - good stuff!

Track #2 "You Make Me Smile" (Colvin) - The bands signature sound is in full effect as vocal harmonies reminiscent of 70's Chicago collides with some major Metallicasque riffage - fusing these seemingly incompatible elements, the band essentially creates its own musical genre yet to be defined to this day.

Track #3 "I Do What I Do" (Colvin) - Once again it's Monty and the boys simply doing what they do.  As soon as monster vocalist Ben Huggins screams, 'Do It!!!',  it's off to the races .....'win, show, place.'  This is the song I play to showcase GC's uniqueness and diversity - thrash, pop, acoustic guitars, doo-wap harmonies - this tunes got it all.

Track #4 "Circles in the Fields" (Colvin) - This tune is more or less your standard metal fare. For any other band I'd be impressed, but GC raised the bar so high with the previous tracks that a trip into generic territory is a forgivable, yet culpable, offense.

Track #5 "If I Were A Killer" (Doss/Huggins) - The mother of all anti-abortion tunes. Talk about a statement! These guys unapologetically venture into controversial territory armed with lethal riffs and lyrical land mines. Moral relativists and progressives Beware!!!

Track #6 "Blind" (Colvin/Huggins) - The mood sombers and the momentum wanes a bit courtesy of this reflective ballad. Nonetheless, this stellar track conveys great emotional and lyrical depth amist an atmospheric musical landscape. This song captures a level of maturity rarely displayed on a metal recording up to this point.  Some amazing vocal harmonies on this track.

Track #7 "No Problems" (Doss/Huggins/Colvin) -Frontman Huggins owns this track lyrically, vocally and musically with some finely placed blues harp. Epic track celebrating and mourning the blessings and pains of our humanity.

Track #8 "About Mrs. Leslie" (Doss/Huggins) - 'Living in a belfry'....what is she hiding that Mrs. Leslie? I don't know but I like hearing what the band has to say about it. This track features a hint of English Pop/Pomp - conveying Mrs. Leslie's plight with witty sarcasm and sentimental regret.  Take note of Monty's groovy base-line throughout as well as the synchronized musical cadence which eventually gives way to an all-out thrash clinic during the bridge.

Track #9 "Where Are You Now?" (Colvin) - Monty takes the lead on this grinding, plodding hard rocker. Not a bad tune, but over time Monty would become a more confident and less monotone singer, as the length and vibe on this one tends to drag the listener down a bit. Come on Monty -move on already!

"Ranch on Mars" (Colvin) - And move on we shall as we are treated to two of the most stellar hidden tracks ever to be hidden.  This one has a hint of The Fab Fours' Sgt. Pepper. A breezy, melodic ode to unity, hope and expectation associated with future transcendence.

Catch the 'Boys' at the Acadia on September 13th!