Bruce and Bono at Greenbelt

Derek Walker caught up with Bruce Cockburn to quiz him about his music, but among the talk of Bono, biopics and big issues, he got unexpected Big Bill Broonzy quotes and behind-the-scenes news on Bruce's nose-blowing.

Earlier this year, Canadian TV aired Pacing the Cage, a biopic about Bruce Cockburn, filmed on the tour that was released as his Slice O’Life album. It opens with Bono facing the camera and quietly saying,
“Here comes the helicopter - second time today
Everybody scatters and hopes it goes away.
How many kids they've murdered, only God can say.
If I had a rocket launcher...I'd make somebody pay."

Closing his sequence, Bono adds jealously, “If I had a rocket launcher, he wouldn’t have written those songs!”

The end of the summer saw Cockburn play England’s Greenbelt Festival, both as a solo headliner on mainstage and the next day at a tented venue, where he played and answered questions.

An hour before the Festival began, clad in black (and much smaller in person than he seems on stage) he was relaxed and jocular as he met with a few journalists.

It was the third time that I had seen him at the festival. The second was two weeks after the 1989 performance that was released as Bruce Cockburn Live. The most striking was his first at Greenbelt, some five years earlier. Partly, I remember it for his dazzling guitar work, but also because I was stewarding for Greenbelt at the time and we were warned that Bono wanted to see Cockburn play and would be smuggled in, disguised as one of us in a cap and high-vis jacket.

Cockburn could not see Bono crouching in the front row – the lights in his face prevented that – but he clearly remembered the excitement about smuggling Bono in without anyone realising. The two met up afterwards.

What has puzzled me is how much that meeting influenced a fairly young Bono, who was soaking up influences. Cockburn had just been promoting the Stealing Fire album, largely inspired by his trip to South America, where the Sandinista movement in El Salvador was rebuilding the nation and investing in education for its children and healthcare projects to protect the poor.

The American government of the time was paranoid about communism at its front door and had planes attacking villages in El Salvador. This enraged Cockburn, who created one of his most famous songs, the one that Bono quotes above. “If I Had a Rocket Launcher” was utterly heartfelt,” Cockburn insisted. “That was coming straight from my gut to the page.”

Only a couple of years afterwards, U2 released The Joshua Tree, their own response to visiting America. “Bullet the Blue Sky,” its most fiery track, tells the same story. It describes corruption, military deals and “fighter planes across the mud huts as children sleep.”

I hoped that Cockburn could give a clue as to whether their conversation that night was the seed of that track. Whether he wants to take no credit for influencing Bono or whether he was simply not party to the Irishman’s thoughts after that conversation is guesswork. Cockburn simply says that their conversation “included that,” referring to Central America, but he could not say how much he influenced the track. 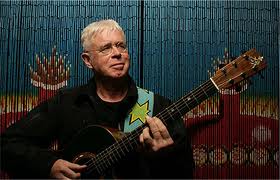 So if Bono is jealous of Cockburn’s work, in response, which U2 songs would the Canadian like to have written?
“Probably more than one,” was his non-committal answer, struggling to remember specific songs. “When I’ve heard them play live, which I have a couple of times, I wanted to have done their whole thing. I wish I was part of that! They have that effect.”

Central America was just one of Cockburn’s issues. His global travels have given him plenty of material for – as he puts it – “What I’ve done over the years: mouth off when I felt it was appropriate.”

For him, protest is something that everyone should be doing in their own way. He just happens to have a bigger audience than most.

“What are you going to do: listen to God or your own disinclination to get out of bed? I think we all have the responsibility to leave our campsite better than when we found it; that’s the way I was taught it as a kid growing up. It doesn’t matter where our station in life happens to be. Just do what you can do.

“It’s also kind of heavy, because a guy in Sweden told me at one point that my song ‘All the Diamonds in the World’ saved him from suicide.

“Well, does that mean you’re supposed to be my slave now (like that old myth that if you save somebody who’s going to die, they become yours)? Fortunately for him, he didn’t think that way – and for me too!”

“But there is a responsibility that goes with that: if my songs are going to have this kind of effect on people, I’d better be careful what I write! But you can’t be careful what you write, because you’re supposed to be an artist.”

By Cockburn’s own admission, the issues are large and complex, but he feels that they tend to boil down to how we treat each other and particularly how we treat the planet.

“Oversimplifying greatly, it comes down to corporate greed and the sense among people that everyone’s entitled to everything and nobody has to worry about each other. To me, that’s the centre of an evil wave that’s spread out through all society and pretty much globally.”
Some might stick their labels on him and disregard his observations, if that suits their politics, but Cockburn wants deeper engagement.

“I hope, but I don’t really believe, that people will outgrow the need to label each other. I’ve always found labels uncomfortable, whether they’re applied to me or by me. And I do the same as everybody else: I file people under such and such, unless I get to know them better. I always regret it when I realise that I’ve done that, because I’m always wrong. I think everybody else is always wrong on that one too!

“When I first started thinking of myself as a musician in my teens, I went, ‘Am I a folk singer or am I a blues singer?’ This distinction was terribly important at that age. Everybody wanted to define things.

“And then you get the quote from Bill Broonzy, who says, ‘Wow, I ain’t never heard a horse sing a song; it’s all folk music to me!’

“We need to be that light with labels. They’re very useful in their place, but let’s get beyond them.”

But his music is not all about issues. The latest album, Small Source of Comfort features several instrumentals. I asked him whether this if this was a shift in his music-making.

“Unless I think of really good words!” he replied. “It’s too soon to know if it’s a pattern to look forward to in the future, but the older I get, the more songs I’ve written, the more I’ve said what I’ve had to say in words and the more appealing it becomes to just play notes that aren’t attached to a specific idea. But I know better than to make predictions about this...”

Cockburn was very jovial. His Bill Bronzy quote won a round of laughter that he acknowledged with a comedian’s ‘Thank you’ and continued. When asked whether he records songs that he doesn’t get to perform, he admitted that there were a few, “sometimes because they’re too long and slow and too down. You just can’t put them in a show. It’s like, people didn’t pay to hear this crap! But I’ve tested the limits of that thoroughly.”

This led on to music that he might make in future.

“I’m still of the intention, if I ever get to it, of doing an album of other people’s stuff, which might include some 'traditional' things. I’m not sure what it will consist of yet. It’s something I’d like to do, because there’s a lot of beautiful songs out there and a lot of them have had a profound effect on me. There would be definitely one or two Bob Dylan songs on the record; there’d be a Mississippi John Hurt song. There’s a few songs I’m sentimentally attached to for one reason or another and then there are actual influences. It might happen one of these days.”

Pacing the Cage shows footage of him playing with kora star Toumani Diabeté. I wondered whether he might record something with a kora player, in the vein of what Ry Cooder did with Ali Farke Touré.

“I actually wanted Toumani to play on the album that followed that, which was Breakfast in New Orleans, Dinner in Timbuktu. We had it all arranged that he would come over to Canada and play on the sessions, but it didn’t work somehow at the last minute. The Canadian Embassy claimed that he never came and got his visa and he claimed he went and they wouldn’t give it to him. So who knows what happened, but it didn’t happen anyway. We went to the airport to meet the plane and he wasn’t on it. It was that close. So we got a Canadian guy who plays kora (Daniel Janke) to come and play on the album instead.

“But the kora is such a gorgeous instrument; Toumani is such a brilliant practitioner of it, so I would have liked for that to happen – but then I think there was some politics involved, because right after that he went on tour in the States with Taj Mahal. I think that someone had said, ‘Look, don’t do the Cockburn thing, because we’re going to do the Taj Mahal thing and that’ll be a lot bigger, blah, blah, blah (that’s supposition).

“There’s a couple of songs on that album that I wrote expecting to have the kora be part of it. So the guitar parts reflect that, but it’s a kind of sound that would have limited application for my purposes – as would pretty much any single sonority. The songs are too varied and go in too many different directions for one particular approach to work for everything.”

Despite the faith-based nature of his work, he has had a rough ride from some churches, especially after he left Ottawa at the end of the ‘70s, where he enjoyed the community of the church in which he got married. As a travelling musician, he has no real base and finds that churches he visits often do not appreciate that. While they should be a home from home for him, he noted that “In many, I found myself unacceptable to that particular fellowship of believers.”

He still finds his faith motivates him, “even though I don’t get to perceive it most of the time. My responsibility is to have a relationship with God that puts God in the driver’s seat. Do I have that relationship? I hope so, but I know my capacity for interfering and so I don’t know at any one point whether the choices I’m making are the right ones or not, any more than anybody else does, but I feel that’s what I should be going for.”

Cockburn’s musical mission may orbit around vast concepts like God, environmental protection and global justice, but his output has noticeably lightened since his new daughter arrived a year ago.

“She’s so lovely and energising in a way, even though she’s exhausting,” he said proudly. “I’m as pissed off as I ever was, but the last year and a half, she’s been – first in the abstract and then in the very real sense - the focus of my attention.”