We all in the audience stood up for an acapella run through "The Star Spangled Banner." No problem there.

Then, the reigning Miss Fond du Lac, she whom I had heard in an interview the morning before on a station from which I would win tickets for my introduction into pre-Miss America pageantry, led herself and those contending for her crown (and a couple of other contests vied for the same evening, but more on that later) in a dance routine to Rihanna's "We Found Love." The song's the latest among Barbadan cutie's several #1 U.S. pop hits and reads like oddly secular hymnodic house music with its declaration of having found that most precious of emotional and committal commodities where none was hoped to have been found. And the choreography the 2011 Miss Fondy put together was compelling enough, considering the varying levels of ability the routine must have had to have accommodated.

But, consider the full single-line chorus repeated throughout the tune to which the current and potential royalty (some of them wear crowns right?)were moving to:"We found love/in a hopeless place." Now consider that the U.S. flag was hanging as a backdrop behind the gals. Just as it was for the singing of the National Anthem and would throughout the evening. What's the tune saying about the country these young ladies want to represent? You sure you thought that one through, Miss FdL?! Considering the ceremony's theme was a salute to hometown heroes, prompted by the slaying of a Fond du Lac police officer in an uncharacteristic and tragic 2011 shoot-out in the town about 40,000, there may have been a certain (un?-)intended irony to the song selection.

Problem there, I'd say. And it's by no means the only quizzical aspect of the night's competition nor of the premises underlying the entire system of pageants that lead up to the highest order of tiara for which those on stage were wanting to win.

Because the ladies helming the Tollbooth uphold an understandable policy of not allowing critique of the non-professional performances of minors, I shan't be saying much about the Miss Wisconsin Central Outstanding Teen competition other than to point out that the majority of the gals were middle schoolers, and, for those who take interest in the use of Christian-made music in the public sphere, for her portion of the talent competition, the winner performed an interpretive dance to Owl City's "Fireflies. It might also be worth nothing that Miss America 2011, Kenosha's Laura Kaeppeler is the vocal coach for the 2011 Outstanding teen, she of the opening  acapella National Anthem.

Also, here's a public pondering as to why the other two thirds of the competition were for Miss Fond du Lac proper and Miss Wisconsin Central, but there was no Miss Wisconsin Fond du Lac Outstanding Teen contest? Not enough interested girls at the foot of the lake (the French translation for "fond du lac") or what? Or is it a separate ceremony for which I might have  to hope I win tickets to attend...or not?

Apart from the Outstanding Teen dealie, Misses Fondy and Wisconsin Central are but two of 25-25!-regional preliminary competitions. A few of the regional civic distaff royals (they're wearing crowns, right?) strode the stage to offer well wishes to the night's nominees.

Not long thereafter, all 21 missies answered the question about why they're representing the respective platforms they would want to publicize during their reign as Miss your Region Here. Most all responded articulately about their important, if really not all that controversial causes. Who isn't opposed to such societal ills and misfortunes as childhood obesity, suicide, multiple sclerosis, drunk driving and the neglect of the arts in public education and the needs of special needs kids, really? One of the gals (not the minors) hoping to rep' Central Wisconsin's theme was "Children Are Our Future," Hey, I thought they're the young part of the present!

I wonder whether pageant officials would have let their charges go with an explicitly pro-life/anti-abortion thrust. Or, for that matter, could Planned Parenthood ever count on a fledgling Miss Wisconsin to support the continued legal option to snuff out in vitro future potential Miss Your City Here and the makes who would ogle them ? Could even such a trendy, if worthy, cause as human trafficking&sexual slavery pass pageant muster? Too late to tell for 2012, so let's go on to that ogling portion of the night, shall we?

This is why a couple of my closer single fellow Christian male friends weren't interested in using the second ticket I'd won from my city's AM news & oldies station after hearing an interview with 2011's Miss FdL to promote the show. If you've watched the Miss America, and even then Junior Miss competition (could someone tell me how that differs from Outstanding Teen, please?) program in recent years, you know most every contestant sports a bikini in the euphemistically-named fitness portion of the competition. Yay for my having friends Godly enough to not want to expose themselves to even the relatively-by worldly standards-exposure of flesh that involves. Yay, too, then, I suppose, for my seat being far enough back for me to not have as good a gander as I could have of all those bare midriffs. And for my not having yet bought the pair of opera glasses I've wanted for just such occasions of having a far less than front row view, eh?

Actually, at least a couple of the contestants strutted their stuff in one-piece bathing suits. Good for them, but I don't believe any of them won the night's big prizes. As for the Outstanding Teen competitors, since pageant officials must believe middle school students are too young to sexually exploit (good thing, that, since the winner's platform was speaking out against sexual abuse!), they rocked more modest work-out wear as they briefly did some stretches or other exercises in them. That looked pretty silly, but so does wearing a 'kini and high heels on a public school auditorium stage, isn't it? Enough of that, though;it's time for talent!

At least in this instance, that portion of the competition could have rightly been called What We Do To Music. Every contestant for each crown danced, sung, played an instrument or did the last two in tandem. Leaving our those vying for Outstanding Teen on the aforementioned grounds, there was some genuinely impressive vocalizing, dancing, saxophone and flute playing among the contestants. but how much more impressive would the event be were the gals allowed to play other talents? Juggling, stand-up comedy, Shakespearean soliloquy acting (or maybe recitations from some absurdist playwrights?), graffiti tagging and spontaneous origami (juggling and the latter two to music, if you like) number among those talents I suggest Miss America wannabe's hone and display for the judges' scrutiny. 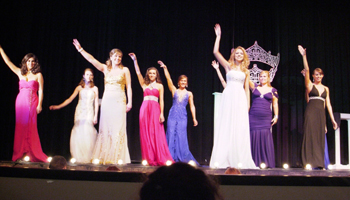 The evening wear competition should better recognize the poise and decorum the ladies should possess throughout their duties as Miss Wherever. And I suppose it did. This was the portion of the night where the Teen nominees got to answer questions about their platforms, too. But come, on, when you've already seen the Miss contestants in skimpier beach & pool gear, isn't seeing them in less revealing get-up's anti-climactic, It's called pacing, people!

The previous year's reigning Misses and Teen each gave a farewell presentation, but their speeches were pre-recorded as they stood alone on stage and looked on at their subjects (or whatever we are to them) before montages of pictures of highlights of their tenures were shown to music. For all the work in public settings where I'd think they would have to give short talks, why they couldn't have done the same as they said goodbye to their tiaras is beyond me, and I'd say it was at least borderline-creepy besides.

I almost forgot! There was a brief interlude for Junior Princesses, not an official competition, who all looked to be under 10 and related to former or present competitors. In a facsimile of the questions the actual contestants,  the kiddies were asked what their favorite foods are. I found myself rooting for the girl who chose apples over the mac & cheese and pizza the others picked. Don't they know that they won't look good in bikinis if they keep eating like that?!

A salute to that cop who was killed last year and a fellow officer and police dog who were injured preceded the evening's coronations. It was respectful and reverent, if a bit laden with questionable theology sometimes inherent in civil religiosity. I won't fault that, I guess, and it was an apt dovetail into the 2011 winners' talks of their heroes.

Then came the big moment. Miss Fond du Lac? She danced ballet to Frank Mills' late '70s kitsch'strumental "Music Box Dancer," was one of those who flouted a two-piece for the, ahem, fitness competition and supports Children Miracle Network hospitals (from which she personally benefited when she was a sickly youngster). If the schedule of last year's Miss Fondy is any indication, she will read children's books at a local museum, wave in a few parades, be a guest at other Miss Wisconsin preliminary pageants, attend the county fair, attend Optimist Club and Salvation Army events, lend a hand to Habitat for Humanity and host a Princess Party (?!), among other duties.