From ghost writing for celebrities to creating his own worlds, Jeapes' brain is plainly worth exploring.

Being a novelist must be one of the most God-like professions around. You can create universes ex-nihilo, naming everything however you like and determining its history, as well as inventing characters and seeing where their interaction will take them. There is no limit to what can happen in the story – especially if, as with author Ben Jeapes – your original genre is science fiction.

Thinking about this, Jeapes’ response is, “That makes me realise how frustrating it must be for God watching the world he has made, when your creation takes on a life of its own,” and he mimics an exasperated God exclaiming, “You’re not supposed to be doing that! Why can’t you do what I had in mind for you?”

Given all these possibilities, where does he start, when writing a novel?

“I’m having theological thoughts here,” he ponders. “I suppose even God created the building blocks first, didn’t he – elements, chemicals, laws of physics? As a writer, you already have those – the tropes, the concepts for you to play with – which is why any writer should also be a wide reader, so you know what you’re working with. After that, it’s not hard to bash it into something different. I think every one of my books has been different ideas all swirling around the back of my head – sometimes for ages – and suddenly I realise, ‘This could be a novel!’

“Take His Majesty’s Starship, my début novel: I had an idea for an alien race with a particular kind of psychology, a mindset that is particularly different to how humans think. That’s quite plot-significant. I wanted to write about a royal space force and I had an idea for a Napoleonic space navy – think Hornblower, Patrick O’ Brian, but in space.

“From that I got a Hornblower-type character, because when I read the novels as an adult, I realised that Hornblower is a manic-depressive. He has a heavy dose of imposter syndrome. Every adventure he goes on, he is convinced that this is where people will finally realise he is just winging it and he’s probably going to be shot, because that’s what the navy did to its failed officers. Hornblower misses the point that he’s very good indeed at what he does. I wanted a character like that, who is very good and doesn’t realise it.”

Jeapes’ own start in science-fiction was perhaps predictable, given that he grew up in the ‘60s. “That was all I read.  When you’ve got it coming out of your ears and your thoughts turn to writing, whenever an idea comes to you, you think of it in science fiction terms.”

His inspirations were from television, “Good old Dr. Who and Gerry Anderson, with a bit of Star Trek thrown in. 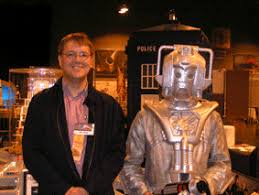 “Then I discovered Dr. Who novels, which in those days were novelised versions of the adventure that had just been broadcast. You didn’t have videos, back in the ‘70s. If you’re not going to be in at tea time, you’re going to miss Dr. Who, which means that episode gets missed for the next thirty years, until you finally see it on video. Reading Dr. Who books inevitably led to reading other science fiction: Asimov, Clarke, Heinleim.”

These pioneering authors built their careers on magazine short stories in sci-fi’s golden age, and became novelists later, a career path that Jeapes adopted: “I thought that would be a good game plan to follow: make a name for yourself – plus, if a short story isn’t going to work, you can learn this far quicker than if a novel doesn’t work!”

Having read nearly all his novels under his own name, I am sure that his work is ideal as gifts for young adult children, nephews and grandchildren, but his short story collection Jeapes’ Japes almost got him thrown out of the Association of Christian Publishers, when a lady browsing through books on a table asked if it was suitable for an eleven-year-old.

Saying that it includes nothing that a child of that age hasn’t heard regularly in the playground, if not said himself, Jeapes recounts, “She flipped through it, flicked more closely and then wrote a furious letter to the chairman of the Association of Christian Publishers, demanding that I be fired forthwith. The president took the line that Ben has signed the association’s statement of faith; he is a Trinitarian-believing Christian, so he belongs.”

One of his favourite short stories was about time-travel in a public school and “apart from the time-travel, was autobiographical, very personal, very cathartic to write.”

That is a clue to the painful experience he had at public school, where “they had a library; nooks and crannies, where you could sit and read and escape from the ghastliness of knowing that in a couple of hours, you’d be running up and down a cold, wet rugby pitch, being trampled by Neanderthals.”

Given that they crop up in his alternative Civil War history A New World Order, where they feature alongside Oliver Cromwell and Charles II, I suggest that he has a thing about Neanderthals.

“Yes, probably! I am fascinated by Neanderthals, because history would suggest that for thousands of years, at least here in Europe, Homo Sapiens and Homo Neanderthalis were interacting. They were certainly here at the same time. I think that geneticists are quite satisfactorily convinced that our ancestors could interbreed. They must have been the closest thing to co-existing with an alien species.”

Frustrated by the proliferation of alternative versions of the American Civil War in science-fiction, he decided to write an English Civil War book (I suspect that he did very well in History at school, and his conversation betrays an extraordinarily retentive mind for facts and trivia). For the story to change, he suggests, there needs to be a strong intervention from a technologically advanced invading army, “Not that advanced; we’re just talking a couple of centuries, in that they have repeating rifles, they have airships, they have 1914-18-style technology.”

Jeapes' inventive approach to storytelling includes sprinkling occasional Christian characters on his spaceships – something that you don’t normally see in sci-fi.

“A lot of science fiction like Star Trek thinks we will all have grown out of this religious rubbish by then,” he observes. “I occasionally want to kick the screen in when someone like Jean-Luc Picard says, ‘Of course, we have the deepest respect for your faith...’ I think, ‘No you don’t! You think it’s superstitious twaddle and you know it! That is not respect.’ Whereas I think the best depictions of Christians in televisual science fiction have been in shows like Firefly and Babylon 5, which are actually produced by atheists, but atheists who understood religion and how religious people think.”

As for his own writing, there are no aliens peeping out from the corner of his pages, projecting holograms with ‘John 3:16’ on them, and he refuses to shoehorn in evangelistic comments that would compromise the integrity of his work, but he maintains, “The Christianity is in there. Apart from the fact that this is traditional in books anyway, I like to have happy endings; I like to see good not only triumphing, but I like to see good ends being achieved by good means.
He also sees his faith displayed in the ghost-writing work he does, particularly for one household name that cannot be mentioned for contractual reasons. People often ask him how frustrating it is to do so much work without his name appearing on the books. Quoting tongue-in-cheek John the Baptist’s famous line, “I must become less that he may become greater,” Jeapes says, “It’s serving, isn’t it? It needs a ghostwriter, because this person can’t write. He’s done lots of other things to save his life, but writing isn’t one of them.”

Furthermore, this celebrity enjoyed Willard Price adventures as a kid. “He wanted something similar for his own kids to read: something that is moral, something with positive messages, something that’s very ecologically aware. So it is a good thing that these messages and this series is written. I have enjoyed taking it on for that reason.”

It’s not all serious stuff, though. Creating your own worlds must mean that you put jokes in for your own satisfaction, and Jeapes has a few of his own, although he admits that they are often in-jokes from films and TV (yes, Dr. Who again) that only the nerdiest might spot. These come effortlessly from his extraordinary, and seemingly never-ending, supply of screen quotes and general trivia.

But in his most recent novel H.M.S. Barabbas, the first of a series that follow on from the classic Treasure Island, these are a little more relevant. The ship’s first officer is called Bale because, “Apart from Jim and a couple of other characters, every male character is named after an actor who has played Jim Hawkins, and Christian Bale was Jim Hawkins to Charlton Heston’s Long John Silver.”

This is one way that Jeapes’ work has now branched out further than sci-fi. His two books (The Teen, The Witch and The Thief and The Comeback of the King) about the teen hero Ted Gorse – his first foray into self published novels – tend more towards fantasy and should please any Harry Potter reader. They are imaginative, inventive and gripping, including dramatic scenes like a fight up Salisbury Cathedral’s spire. At times, they seemed written for their possible film rights, such is the visual impact of his storytelling.

Jeapes may not be a household name, like the celebrity he writes for, but his work shows that excellence still lurks in the valleys of obscurity.