Ian Anderson: Winding Up the Church

Anyone who has followed Jethro Tull for some time may find it hard to make sense of singer and bandleader Ian Anderson’s spiritual life. His Aqualung anti-church railings gave way to near-pagan Solstice celebrations on Songs from the Wood, which themselves (via a multi-faith instrumental solo album) gave way to a very decent Christmas album with no real sign of irony.

The only way to make sense was to speak to Ian Anderson himself and ask him to guide me through the story.

School assemblies were a bad start for his understanding of faith, especially as he saw the headmaster, Revd. Dr. Luft, as a Christian and not a good advert for it. Very strict, “He was a rather brutal man, who wielded a cane.”

Once Dr. Luft had left, Anderson had another bad experience with a cane, this time the deputy’s.

“I had committed some infringement, which was definitely worthy of punishment, but I refused to be caned. I found that distasteful; the idea of a middle aged or even elderly man whacking young boys didn’t seem to me to be right.

“I was willing to accept another form of punishment, but was not willing to be caned. Whereupon, I turned out and never went back.

“That was all wrapped up in the sense of feeling that there was something very strict and authoritarian and really not very nice about my awareness of the Christian religion, as we were not invited, but told to participate.”

Although Anderson was angry about his experiences, he understands that bad representatives are a problem for many institutions, noting with a wry laugh that, “it happens in life that people chose things for which they are really not naturally gifted. You can’t but help but think, ‘You’re really not very good at this. Wouldn’t it be nice to find something else to do?'”

Just how Christian these individual characters were, we do not know, but – as seems to happen so often – the uncaring culture they created gave the faith a bad name and put off Anderson at a very formative stage.

All this helped shape the impressions that would be passionately immortalised in the Aqualung album. While the songs often railed against organised religion, even then, Anderson could separate that from God himself.

In “Hymn 43”, he had the American right in his targets for appropriating God:
“Our father high in heaven, smile down upon your son
Who's busy with his money games, his women and his gun“

But England was also in his sights as ”My God” had a go at Catholics and the Church of England:
“People, what have you done / Locked Him in His golden cage
Made Him bend to your religion / Him resurrected from the grave”

The title track – written by his wife of the time – gave the Salvation Army a good plug by inference, and “Wind Up” was saying how much greater God is than the flawed institutions that represent him.

“I knew that everybody wasn’t like that,” he continued, referring to the headmaster and his ilk. “I think some people who heard the Aqualung album got their knickers in a twist and there were burnings of the album in some Southern states of America, where the Baptist Church and the evangelicals really took issue with my criticism. But elsewhere, I got a lot of supportive letters from people and clergy, who said, ‘We know what you’re on about; we think it’s right that these things should be questioned.’

“Any priest who tells you that he never suffers any moments of concerns and doubts and loss of faith is not to be trusted. Of course you’ve got to question; of course you’ve got to have these elements of, ‘Is it all worth it? Is it real? Is it just some supernatural compulsion that we as a species seem to have?’”

Anderson considers the divisions in the Anglican Church about current issues to be signs of a healthy faith that engages, rather than being “blind... and never acknowledging that the world is a different place, a very different place, to what it was” at the time the bible was written. And he holds that the bible still has a valid place today, subject to interpreting it in the light of things now known.

Anderson regularly enies that Aqualung was a concept album on this theme, but its successor, A Passion Play, was not only a concept album, but one that he hoped would spawn a film. The album was about Ronnie Pilgrim, who saw his own funeral and then was whisked off to both heaven and hell, and was happy with neither.

“It was written very quickly,” Anderson recalled, “and it was loosely based on a rather theatrical, surreal and very British kind of black humour, based potentially on an afterlife, a conflict and the things that we might take with us into a subsequent existence, where the traditional roles of God and the devil are a little bit mixed up as characters.”

Anderson contacted a range of talent for the project, from John Cleese to do the comedic writing and Donald Pleasance as an actor to Dame Margot Fonteyn for some ballet. But the whole thing fell apart when the only people willing to invest in it were American and they did not want to retain the Britishness of the humour, which was, for Anderson, intrinsic to the whole project working.

He found this particularly disappointing because, “at that point Monty Python and Benny Hill had made it in America and I thought they would get the idea.

“But it would have been fun to make, it wasn’t quite as scurrilous as The Life of Brian turned out to be, but it certainly would, as a movie, have worried some people, because I was taking stereotypical ideas about the Church and the idea of salvation, some kind of spiritual life after death, and fooling around with it.”

Since then, he has released The Jethro Tull Christmas Album, a superb collection in the vein of his rural albums like Songs from the Wood. Along with some traditional tunes ("We Five Kings" is the carol played in 5/4 time) it includes a few new songs and revisits some older tracks, such as "A Christmas Song," with its final line reminding people that they would do well to remember Jesus' words.

The album begins with the lines,
"Got a birthday card at Christmas/ It made me think of Jesus Christ
It said, 'I love you' in small letters / I simply had to read it twice" 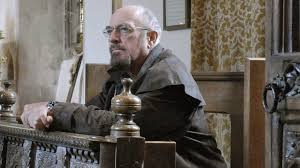 It seems that he nailed it when he told me, "I’m a fudger. I occupy that rather woolly middle ground." On one hand, he respects Jesus and stands up for him from a distance, while on the other, he likes to keep his options open with other faiths and wind up the Church.

Although it does not stop him, Anderson is concerned about the reaction that he gets when he pushes boundaries, even with his Christmas cathedral shows in aid of the buildings.

“There are Christian believers who feel that it’s inappropriate for someone like me, who readily acknowledges I do not want to be called a Christian in the paid-up sense, perhaps an unwelcome intruder into the traditions of the Church, to be performing what is essentially a secular concert.”

But he still tries to build links and treat the occasions appropriately, including bible readings and some liturgy in the show.

Anderson has another cathedral link now that Jethro Tull – The String Quartets is released.

“For me these days, working in the grand medieval cathedrals is another day in the office. I feel I have a very easy fit with that world. The String Quartets album was recorded in the crypt of Worcester Cathedral and in one of the historic churches, which the Historic Churches Preservation Body look after. They’re people that I work with. My view is that the Church of England needs all the help it can get and those of us who pile in and do our bit should be, at the very least, tolerated for our efforts. Maybe you can’t quite count upon us for 100% fitting neatly into the ranks. Better having us on your side than not at all.”

A review of String Quartets will be online shortly and a fuller version of the interview will appear by mid-May on my blog: http://walkerwords.wordpress.com