Some people get the breaks. Steve Turner is one of them. He gets paid for talking to his heroes; Bono admires him; he is the focus of a biopic (“Support Your Local Poet”) and he has a reputation for quality writing, whether journalism or poetry. God seems to smile on him.

There is a lot about his life that we can talk about, but when we chat by phone, it is because of his latest book Beatles ’66. Month-by-month, it covers the year when the band changed from cute mop-tops to psychedelic pioneers. It was when John met Yoko and George met Ravi Shankar. It was the year of the final tour and the ‘greater-than-Jesus” rumpus. It was the year when everything changed.

As a writer, Turner knows his way around words. But for this book, his first-hand experience is the grammar that shapes them.

As a teenager, he would travel by train from Northamptonshire to London to buy shirts in the boutiques where the Beatles bought theirs and to buy the books that they were reading. He knew the smell of the joss sticks and the clothes. “I was kind of imbibing this stuff,” he recalls, “and when Revolver came out it was like the aural equivalent of all this stuff that I was experiencing, all these changes.”

But writing about it to celebrate the 50th anniversary of the events, could his memory be honeyed by nostalgia and accuracy misted by time?

No. Turner considers this an ideal time, because, via the internet we can, “for example, access huge libraries of American Newspapers; university archives are online. Stuff that would have taken me a long, long time to do, you can now do at the touch of a button. A lot more books come out, so different people tell their stories. Even minor people who are in minor groups suddenly write their book and you get one good detail in there.”

He agrees that memories can be dulled, but claims that he is in a better place than The Beatles themselves, when it comes to sifting facts from impressions. Their lives were too hectic for them to record things accurately.

“If I were to sit down and talk to Paul McCartney, I don’t think I’d get more out of him than I’ve got from talking to about fifty other people, because he’s told the stories so many times,” Turner claims, asserting, “He dates things wrongly and attributes things wrongly.”

Turner has interviewed Paul McCartney – and John Lennon – for two previous books on The Beatles. But a much earlier break led to the book Conversations with Eric Clapton at a time when the guitarist did not give interviews.

“It was accidental, really,” he explains. “I knew Dr. Meg Patterson, who was treating him for heroin addiction. Her husband George was a writer and adventurer, traveller, former missionary. They had an apartment in Harley Street and Meg was developing this new treatment, based on acupuncture, to beat addictions. I was in the habit of visiting them and went round one day and Eric was there.

“They treated him at their home. I went in and sat down and he started to tell me all this stuff about how he got addicted and what happened to Cream and I couldn’t believe what I was hearing really!”

Clapton even invited him to write about it, and the resulting Rolling Stone interview eventually expanded to become a book. It was a huge coup, and one that set up his career, but not necessarily the most rewarding of his books to write.

“They were all satisfying in their own way. My biography of Cliff Richard was, because I’d never written anything that long. I interviewed over 300 people. I’d never done anything on that scale before. It was satisfying a) to do it and b) that it was a best-seller. It went into the Sunday Times top ten, sold 60-70,000 as hardback.

“I’m very satisfied with The Gospel According to the Beatles, because it really says everything I wanted to say about what The Beatles represented, but also about what rock and roll represents and what ‘60s culture was all about.

“And Beatles ’66, I’ve got a copy of it at my desk and I keep picking it up, looking at it, and feeling it. 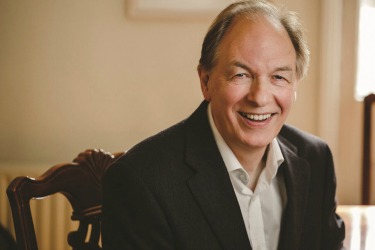 “With the book, I keep trying to bring in ‘This was on the cover of Time Magazine that week’ or ‘This was a law just being passed’. People forget that we only had a few motorways in 1966. Mostly when bands travelled, it was along A roads – two-lane highways – and you stopped at ‘greasy spoon’ transport cafes. You’ve got to evoke that era.

“One guy [ex-Tollbooth writer] Steve Stockman, said, ‘I’ve always looked at The Beatles vertically, looking down with binoculars, if you like, but Steve’s given me a horizontal view.’ So I think he means, ‘He’s put me in the midst of what was going on’ – the midst of the period, the midst of the group, the midst of the culture – and that is one of the things I wanted to do. He put it in a way that I hadn’t thought about.”

Thinking partly of his kids, who often select music track-by-track via streaming channels, rather than buying whole albums, he adds, “There comes a point when they want to get a perspective on it and say, ‘Well, was “She Loves You” before “Let It Be” or after?’ They want to get it chronologically right, then look at the albums and the cohesion of the albums.”

Turner appreciates the phenomenal creativity of the period. While The Beatles were undoubtedly pioneers, they fed on the work of others who fed on them.

“Because there was a lot of good music coming out by their contemporaries (particularly Dylan, Beach Boys, Smokey Robinson, The Who, The Kinks) it raised the stakes. Each of them would be looking over their shoulders and trying to do something better.

“Between ’65, ’66, ’67, all of those people did some of their best work and they all fed into each other. The Beatles were looking at The Who in terms of feedback; looking at Dylan in terms of lyrics; The Byrds in terms of the twelve-string guitars; being introduced to Ravi Shankar by David Crosby. There was a lot of healthy competition. 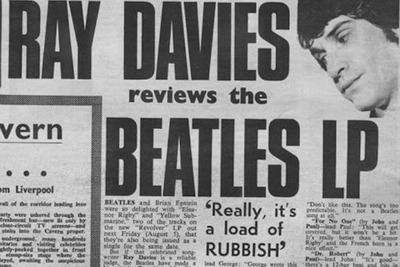 “I don’t think anyone hated anybody else – although The Beatles never seemed to say anything good about The Kinks, which is rather strange, because The Kinks, I think, pioneered telling a story in a song and having a character – "A Well-Respected Man," Terry and Julie in "Waterloo Sunset" – which is what The Beatles did in "Eleanor Rigby:" for the first time, they introduced a character and a small story.”

They would all be rubbing shoulder in TV studios. Maybe it was a personality clash?

“There is one incident I mention in the book,” Turner adds, “Where The Kinks came offstage and John said, “Oh, do you mind if we borrow your set-list?” You know, implying that The Kinks were just playing exactly the same thing as The Beatles. That may have rubbed each other up the wrong way.

“I’m trying to evoke the period for a lot of people who didn’t live through it. I grew up with people, who, when we talk about Revolver, all know what we’re talking about, because we all had the same experience in the same year. But as you get older, you realise that there are generations who didn’t go through the same things and you’ve got to put it in perspective and give them a flavour, like when I used to ask my parents about the war.

“You can tell the story of the war by saying, ‘1943 this happened, 1944...’ but from your parents, you get the smells, the fears and the old letters, and all that stuff, which gives you more of the feel of the era.”

Turner prefers Revolver to Sgt Pepper – “Probably. Sgt Pepper was a more deliberately staged soundtrack, where you’d have deliberately different songs, like ‘Hey, let’s do a 1920s, ‘30s-sounding song; let’s do a song with a raga going on in the background.’ Revolver’s not the sort of rock album that you’d have expected them to play at the Cavern, but it’s still got that inheritance. You could imagine them doing it in that context, but the songs are that much more sophisticated.

“But at the time, they couldn’t imagine doing them on stage, because using a Mellotron, or something like that - they couldn’t conceive getting that sort of stuff on the stage. That’s when they drew a line under touring.

Turner’s faith and journalistic integrity mean that he covers events like the ‘Beatles are more popular than Jesus’ controversy with an objective eye that understands the passions and frustrations of both parties. His poetry is the main outlet for his more subjective views on the world around him.

He began writing poetry in 1965, four years before his first article, but there were points where the two connect.

“I identified more with songwriters than poets at the time,” he says, “So I was more interested to talk to John Lennon, Pete Townshend or David Bowie about how they wrote their songs. I could identify with their method of writing, because it was so similar to the way I’d write my poems. I would perform my poems and I could relate that to how they performed on stage and the decisions they made.”

His poetry is not the only writing that elicits personal responses from his readers. Again reflecting a Lennon influence, Imagine (used in American colleges and just updated for America in January) is his vision for Christians in the arts. Readers of this book write to Turner, telling him things, “like, ‘You put into words what I’ve kind of felt, but haven’t been able to articulate’ or even, ‘I was going to do this job; now I’ve decided to do that job.’”

Of the more recent Popcultured, which encourages ordinary Christians to treat the culture around them with discernment, Turner says, “Again, a lot of people found it helpful. But also, writing the book helps me think it through myself, because often life’s coming at you so fast you don’t have the time to think where something’s coming from. It can be a bit of a hard job, but you don’t want to just turn the TV on and let programme after programme wash over you and not think, “Where’s this coming from? Who’s involved? Who’s talking to me?”

It may sound naïve, but I can’t help thinking that Turner has one of the best jobs in the world – and he does not deny it.

Expanded version of this interview here