An Interview with Tara-Leigh Cobble

Tara-Leigh Cobble has released seven records and published two (soon to be three) books, but what she really loves is to meet the person who comes to her concert in need of a listening ear or an encouraging word.

She has been driving around the country and flying around the world, singing and speaking full time since college. In that time, Tara-Leigh has covered close to 750,000 miles, at more than 2,000 shows in 48 states and 8 countries. Her current tour promotes her seventh album and her forthcoming third book.

A self-professed insomniac, she travels tirelessly to keep such a busy schedule. Her concerts are, to say the least, personable and engaging. When you leave one of her concerts, you feel like you've gained a new friend.

The Phantom Tollbooth sat down with Tara-Leigh, virtually speaking, and asked the following: 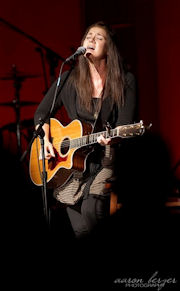 Tollbooth: How did you get started singing/writing?

Tara-Leigh: My first songs were hammered out on an old upright piano that was conveniently stowed in the darkest corners of my parents' house. That allowed the most distance between my cacophony and my mother's kitchen, where she spent most of her time. I started writing songs around age five, singing them into a handheld tape recorder. Many years later, due to the pending Y2K threat, which would leave our world without power, I picked up the guitar so I could learn to play all the songs I would never be able to hear on the radio again. My songwriting took a turn for the better. And we still have electricity. I consider it a win-win.

Tollbooth: Tell us about your creative process.

Tara-Leigh: What usually comes to me first is a lyric. Maybe it's a turn of phrase that flows naturally in conversation. My ears perk up. I write it down in my phone or in a journal. I keep all these little lines, hundreds of them now, in a document on my computer. I file them under topical headings. When I go to write a song, I pick one that fits the theme of what I want to write about, and it becomes the anchor. Sometimes, depending on how the song moves, the line gets extracted completely. That happened last week, actually. It feels like a little death. But then I put that line back into my database, hoping it will inspire another song, maybe one in which it can make an appearance.

I love co-writing, and I've found a handful of friends that I do that with really well. We learn our processes, we lean into our strengths. If I find someone who is great with melody, that's the best case scenario for me, because I'm really a lyrics and logic girl. I want the song map to make sense, and I want the lyrics to be uniquely beautiful. Melody has never been my strong suit, but my co-writers are helping me to grow in that area.

Tollbooth: How do you manage recording/publishing/promoting?

Tara-Leigh: I've never done it any other way, so for me this is just life. It doesn't seem stressful or chaotic. It's very, very hard. But it feels natural to me. The tough thing for most artists is that we're somewhat scattered and undisciplined. But when you want something, when you're called to it and driven toward it, you will put the proper boundaries in place to make certain you give it your all. This is really about regulating my schedule and prioritizing. I just have to set aside certain amounts of time for things. If I drop the ball anywhere, it's promoting. I hired a booking agent for that.

Tollbooth: Is there an aspect of what you do that you favor?

Tara-Leigh: Whatever I'm doing at the time has me fully convinced that it is the greatest thing in the world. My dad calls this "hyper contentment." It's an imaginary affliction which causes me to believe that there is no possible happiness to be found in any other situation than my current one. It helps keep me focused, but it makes transitions difficult. If I'm at home writing, I never want to leave on tour. If I'm touring, I never want to come home. I love it all.

Tollbooth: What is your view of your ministry and calling?

Tara-Leigh: John 3:30. "He must increase, but I must decrease." Music and books and speaking--those are my platforms to spread God's love. I have always felt called to smaller crowds, to personal conversations. I'm not interested in tour buses and recording contracts and fame. I'm interested in the woman who comes to my show with a broken heart, who doesn't feel loved, who is terrified of her future. I want to talk with her afterward. I want to listen. If I get a chance to do that, and to remind her who God is, then I'm entirely fulfilled in my work.

Tollbooth: Tell us about your current projects.

Tara-Leigh: My seventh album, Morning's War, is the hardest one I've ever written. I wrote it about the time when my heart was broken and when God disappeared (or so it seemed). I wrote much of the album with the man who broke my heart. That was a new experience. We were writing songs about our relationship, how everything went terribly wrong. That's when I realized that I'm not one of those artists for whom making art is therapeutic. I don't finish and feel better. I finish and feel smarter--like I understand the situation more thoroughly.

The book, Orange Jumpsuit: Letters to the God Who Frees, is about that same time period as well. For me, music has been the thing that I relate to where I am in the moment, but books have been the thing that propel me toward being the person I want to be. So the songs on Morning's War are the things a person can listen to when life is hard, and the truths in Orange Jumpsuit are the things they can lean into when they're at the point of thinking, "Okay, what now?"

Tollbooth: What are your future plans?

Tara-Leigh: The book comes out in November, so I'll do some book tour concerts, playing a few songs and reading the chapters that tell the stories they stem from. The two are very tightly woven together. People keep asking if I plan to make a movie next. There are no plans for that. But who knows. I'm still waiting to see how the story ends.

You can find all things Tara-Leigh Cobble, including how to purchase music and books, on her website http://taraleighcobble.com/.

Note that until 10/03/11 Tara-Leigh Cobble is offering a sampler of her music for free on noisetrade: http://noisetrade.com/tlc