Is Bono the Messiah, or a very naughty boy?

Most U2 fans will have plenty of stand-out memories. Mine began in 1981, when they played the birthday party for my local rock club in Aylesbury. I knew none of their songs at that time, and instead of my normal place against the stage, I found a spot at the back of the hall and danced all night.

My last big impression was at Wembley Stadium on the 3600 tour, where, strangely, I was even nearer to the band than in Aylesbury. When most of U2 crossed the bridges onto the B-stage behind me, I turned around and it felt like being at the back of the stage looking out at the crowd.

But of the early tours, the most striking thing was the atmosphere. The shows always ended with “40,” a re-working of Psalm 40. Walking out of London’s Hammersmith Odeon after one gig, I asked my friends not to talk to me for a while, so I could savour every last moment of that feeling, before it faded, the chorus looping around my head.

So 40 has always been a key number for U2 fans, and this week the band celebrates 40 years since forming in drummer Larry Mullen’s kitchen.

Given that they have probably been, at some point in their career, the biggest band on the planet, and that people normally like to associate with success, it is strange that a band three-quarters made up of Christians, singing blatantly about God, has had such an uneasy relationship with the Church.

The problems started early from both sides. Bono was brought up in the sectarian strife of 1960s Ireland, with a Roman Catholic father and a Protestant mother. It gave him the sense “that religion often gets in the way of God.”

But the Church seemed to distrust the band for many years, probably because they do not live the lifestyle that evangelicals expect of them. Bono swears, drinks and smokes; the band parties.

If there was a key moment when the relationship turned around, it could be America’s 2006 National Prayer Breakfast, something held annually in the presence of the President, when Bono was invited to give a speech. 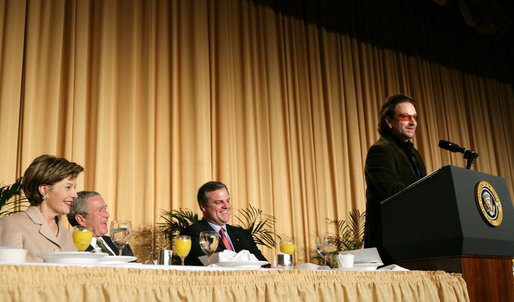 He did so unequivocally as a Christian talking to his brothers and sisters. It was his big chance to both speak to power as a Christian and to urge the Church to move forward.

A decade later, that scriptural manifesto still points the way to go  and highlights four key areas where U2 have set an example for the Church: taking God seriously; changing the world; the importance of grace; and healing relationships.

The band took their faith so seriously that very early on, under pressure from their intense youth group Shalom Fellowship to leave the world of rock, guitarist The Edge and Bono did briefly quit the band. Bono has likened it to Abraham taking his long-awaited son and being prepared to sacrifice him for God. Once they had been prepared to give up what they had longed for, it became “more powerful” afterwards.

Plainly, they have made far more impact for God as musicians and activists than they ever could by staying behind in Dublin. They have been answer to the prayer of many of us who asked God for someone to relate to our generation in the way that Cliff Richard did to the previous one. What an answer: U2 have communicated globally and at a deeper level entirely.

Ironically, the honesty that comes from taking God seriously has been far more missional in its impact than Christian labels trying to make their artists squeaky-clean role models. It has enabled ordinary people to relate to their music.

The Psalms have always been a key part of the scriptures for Bono, and that grounded, emotional honesty was always going to be a key part of their lyrical approach. In the book U2 by U2, he says that our spiritual life can be as messy as the rest of our lives, “so if you’re going to sing about it, own up to your own frailty and vulnerability.”

Taking their faith seriously has led to the most obvious feature of the Prayer Breakfast speech: speaking truth to power.

In it, having praised Americans for their charitable generosity, Bono told the President, “But justice is a higher standard. Africa makes a fool of our idea of justice; it makes a farce of our idea of equality. It mocks our pieties, it doubts our concern, it questions our commitment.

“6,500 Africans are still dying every day of a preventable, treatable disease, for lack of drugs we can buy at any drugstore. This is not about charity, this is about Justice and Equality.

“There's no way we can look at what's happening in Africa and... conclude that deep down, we really accept that Africans are equal to us. Anywhere else in the world, we wouldn't accept it. Look at what happened in South East Asia with the Tsunami. 150,000 lives lost to that misnomer of all misnomers, ‘mother nature.’ In Africa, 150,000 lives are lost every month. It's a completely avoidable catastrophe.”

Advocating the spirit of tithing, if not the scale, he added, “Now, I'm very lucky. I don't have to ... sit where you do, Mr. President. I don't have to make the tough choices. But I can tell you this:

to give one percent more is right. It's smart. And it's blessed.”

Not many people get to suggest to the American President budget policies that could impact millions of lives. 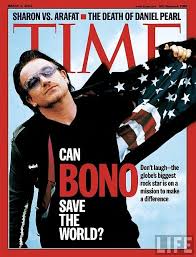 Without waiting for governments to act, Bono and his philanthropic friends have already made a world-changing difference.  Apart from lobbying at the highest levels, leading to millions of dollars heading to Africa, they have practised what they preach with projects such as DATA (Debt, AIDS, Trade, Africa), advocacy organisation ONE Campaign, and fair trade brands EDUN and Project Red.

Bono has had plenty of critics, not least for tax hypocrisy. He advocates increases in governmental aid, which is sourced from tax, but the band’s own accounts migrated to the Netherlands, where the tax regime is even more benevolent than in his native Ireland.

Reading his words, it is very clear that Bono, who jokes about his “messiah complex,” has always maintained that the core of his faith is grace, because he knows how much he needs it (for example, the ‘Atomic Bomb’ in the album title How to Dismantle an Atomic Bomb is his anger). Whereas evangelicals are big on judgmentalism, not least on the gay community and liberals, U2 celebrate the great leveller – grace.

The song “Grace” closes All That You Can’t Leave Behind, asserting, “Grace finds goodness in everything ... Grace makes beauty out of ugly things.”

Judgmentalism starts from an attitude of “I am right and you are wrong,” whereas grace’s starting line is, “We are all flawed and equally need God’s love.”The singer is very aware of his flaws.

The pragmatic outworking of this is that, in order to achieve good things, Bono works alongside not only people he disagrees with (such as George Bush) but also many who are opposite each other in their worldviews, such as arch-conservative Pat Robertson and justice campaigner Jim Wallis. Bringing people together like this is the first step of mutual understanding each other and healing differences.

That is something the band lives out. They have fought hard, but remain together. It is like the song “One,” which The Edge feels is romantic because – despite the fierce tensions in the relationship it describes – the song says, “We’ve got to carry each other.”

In all this, little mention has yet been made of U2’s music. Bono has his platform only because the music connects with enough people to give him clout. And it connects because it has fire, passion and truth – Holy Spirit qualities.

In these four aspects – taking God seriously; changing the world; emphasising grace and healing relationships – U2 are not just pointing the right direction for Christians (and in particular evangelicals) to move, but they are reflecting the same priorities as Jesus.