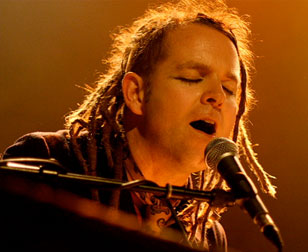 In a world where the corporate music factory is killing talent and creativity, you could argue that Duke Special is a model for how musicians should work in the 21st century.

With eyeliner defining his eyes and his head part-shaven and part-dreadlocked, he doesn’t need a global marketing machine to give him an image. Character and talent are the twin traits that get him business.

Using them to the full, Peter Wilson (as Duke Special is known to his mates) thrives on weaving his way between the mainstream albums that pay the bills and individual commissions that stretch his inventive brain and keep his work from being predictable. As he told me, “I find ‘off the beaten track’ really interesting and you need a little bit of success in other places to help you keep doing it.”

Although his just-released Look Out Machines! (possibly his career-best) was in genesis at the time we spoke, I was just as keen to ask about an older commission, which became the album Under the Dark Cloth. New York’s Metropolitan Museum of Art approached him to create music for a show, based on the photographic pioneers featured in its collection.

“There’s an organisation within the Met called Spectrum,” he explained. “Their remit was to attract a new audience. It is some of them who came to me.

“I had no preconceived ideas,” he replied, when I asked him how he whittled down so many possibilities to just an album’s worth of music. “I read a lot about three gentlemen, Alfred Stieglitz, Edward Steichen and Paul Strand; read about their lives, looked at images at exhibitions, but also read around them and the times that they lived in.

“Some of [the songs] were quite impressionistic, so it was just how I felt about that image, where it brought me in my own head. Then there were the subjects of the photographs, so I began to read about them.

“One of the songs is called “Rita de Acosta,” Wilson continued. “It’s purely her story. There’s nothing made up about it. This amazing woman, who married twice and then engaged, seemed a bit of a gold-digger. She kept marrying these elderly gentlemen, who were very wealthy, and then spent the whole lot and died alone in a hotel room."

The Met got great value from Wilson. He has been paid for other commissions, both for his time and for appearing in the show, such as when he wrote and played in Mother Courage and her Children at London's National Theatre. 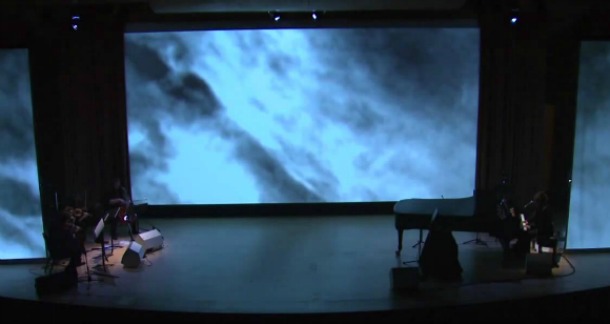 But for the photographic pioneers project, not only was there no money in it for him, he paid out £8,000 from his own pocket to hire a string quartet and a visual projection team, as well as for transatlantic flights.

And it seems the Met were happy too: “They really loved it! They reprised that show (https://www.youtube.com/watch?v=F_VdxPtlnso) three or four times.”

“It’s a very educational thing,” Wilson explained. “Everyone has their own little trademarks in writing and when you collaborate, you learn from the other person what they do really well. I’ve collaborated with people a couple of times and nothing really has come out of it, except you get to see someone else work.”

Likening co-writing to going on a blind date, where you are trying to impress and hopingit works out, he explained, “There needs to be chemistry. The best collaborations are where your own agenda and egos are put aside and that’s definitely the way it was with those guys.”

In an earlier interview, Wilson told me how his early visual prop of a gramophone, which sat on top of his piano, was inspired by the actor and comedian Andy Kaufman, who uses a little record player in the film Man in the Moon. This time, I wanted to know whether, adding his penchant for pre-rock and roll music to that prop, he wishes he had been born into an earlier time.

“No, I’m really happy to be around now,” he replied. “I think the use of things like the gramophone was really just a way of trying to make performing solo interesting, so it wasn’t just someone earnestly singing their songs; it’s just a way to cope with performing on my own as much as anything.

“I like using visual images, props, and it just makes it a wee bit easier to connect with an audience; and immediately gives people the idea that this is another world we’re walking into – because that what music does – it transports people somewhere else and makes people feel something. It’s an amazing ability that music has.”

At the earlier interview, when asked whether he was still proud of any of the praise albums he had been involved with, he replied, “My faith is something that I'm not ashamed of, of course. There’s definitely some praise and worship albums that I'm a bit embarrassed about, because I don't think they were well produced, in the same way as I'm embarrassed about other albums that I've played on that I wouldn't want to see the light of day.”

When I asked him this time how his faith impacted his creativity, he paused, looked down and seemed to struggle to find the right words, telling me that there is always a tension in his relationship with his faith.

Despite growing up in a Christian family and having been involved with several Christian organisations, it seems that he has let the aggression of fundamentalists – particularly from Northern Ireland – crowd out the impact of Christ. Yet despite it all, there are still sparks inside that refuse to go out, “I think ultimately, I feel something comes alive in me and things like grace and hope really, really resonate with me and I can’t shake them.“

When Look Out Machines! was released, the track “In a Dive” turned out to bear an uncanny resemblance to that part of our conversation:

“Jesus and his blood don’t mean so much anymore
Something must have died in this rotten apple core.
Don’t get me wrong: it isn’t that I don’t believe.

Maybe it’s this place I grew that burns in my throat
Fundamental shoes who carry souls to the boat...

Certainty’s a city I decided I should leave.

Don’t shrink it down to the size of your head;
You know that some things are more than can ever be said. ”

Wilson went on to explain, “A very inspiring film for me was Searching for the Wrong-Eyed Jesus. A musician called Jim White grew up in the Southern States and he goes back. He finds this weird statue of Jesus, which he puts in his car and drives around, almost like taking it on a journey where he grew up, a crazy Bible belt area.

“He describes how society tries to make us conform to certain things. He pulls an ice cream up and he says that conforming is like being pushed down into the cone, and what you have all around the edge of the cone, you’ve the criminals, religious fanatics and artists. I feel very safe in exploring that stuff in art.

“Yet there’s a gentleness within that, which sometimes doesn’t exist, but I find the arts and this area to be really important to me as a way of looking at things.”

[See list below for a review of Look Out Machines! A fuller version of the interview is on the WalkerWords blog below]