For a 40th birthday party, this year's Greenbelt Festival was surprisingly low-key on looking back, but it left plenty of good things in its wake.

Unusually for Greenbelt, the fortieth festival had most of its strengths in just two areas: talks and music (in this reviewer's opinion). I have boiled my coverage this year down to just seven highlights in an approximate order, with the best first. 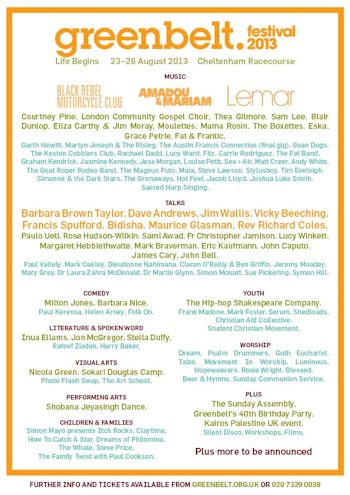 1. Jim Wallis.
Just ten minutes into one of Jim Wallis's talks in the huge Centaur indoor venue, I remember thinking that I had already heard enough inspiring material from Wallis to keep my brain and spirit working for a very long time.

The American activist/theologian was talking about his vision for impacting society, based upon his understanding of the "common good". One of his suggestions was that if we should love our neighbours as ourselves, then we should love other people's kids as if they were our own. Plainly, the practicalities are impossible, but having that approach to children can reap all kinds of benefits. It was a highly thought-provoking idea.

He recounted the story of a pastor in Memphis, Steve Stone, who, learning that an Islamic centre was to be built near his church, put up a sign that read, "Heartsong Church Welcomes Memphis Islamic Center to the Neighbourhood;" let the Muslims use a room in his church when the centre was still under construction, and instigated joint barbeques with halal meat.

When Wallis was talking to CNN about their lack of good-news stories about Muslims, he directed them to the community in Tennessee. They ran the story on the global news service.

A surprised group of Kashmiri men saw the item and realised that not all Americans hated them. One leader announced that God had spoken to them through this news item and another went straight to the local Christan church and cleaned it as a reciprocal expression of neighbourliness.

Late one night, Stone received a call from these men in Kashmir, who told him that because of his actions, "we are now trying to be good neighbors, too. Pastor Stone, tell your congregation we do not hate them, we love them and we are going to take care of that little church near us, just as you have cared for the Muslims in your district". It was another account of loving our neighbours as ourselves and the good that can follow.

On the way to an entirely different event, I was walking past mainstage, when the gorgeous harmonies of the Moulettes literally stopped me in my tracks and made me lay on the grass under a warm, balmy sun to soak in what was left of a short, but potent, half hour set of folk-classical-prog.

A stage that boasted an autoharp, bassoon, fiddle, electric cello, and double bass (played by Mumford & Sons' Ted Dwane) among other instruments, made tangible the band's creative, surreal and a humourously dark approach to storytelling in music. My head buzzed with musical references from Thomas Tallis to the Decemberists, via the Everly Brothers and Simon and Garfunkel.

The Moulettes were my musical discovery of the weekend (Greenbelt normally produces at least one) and this site has a review of their current album (see below).

3 Courtney Pine
A festival regular, Pine's set was based largely on his current release, House of Legends, which celebrates his Carribbean roots, but I doubt that the album as anywhere near as good as his live account.

Feeding gluttonously off the audience reaction, Pine was at his most accessible as he played largely on a soprano saxophone, his horns fed through a system that made them sound more like a jazz-rock synthesizer. His band featured steel drummer samuel Dubois and the material cheekily included well-known tunes from “Take Five” (was it playfully performed in a different time signature?) through nursery rhymes ("Pop Goes the Weasel”) to advertising jingles (“Cadbury’s Fudge”). An overlong bass solo aside, this was pure class and jazz heaven.

4 Fr. Christopher Jamison
The former abbot of Worth Abbey seemed rather nervous about speaking in front of a Greenbelt audience and had misjudged their churchmanship a little, but he need not have worried, as he gave an engaging and thought-provoking talk on “Finding Sanctuary” in our busy daily lives.

He dropped in anecdotes about the experiences of several human guinea pigs, who volunteered for the reality shows based at his monstery, a range of people from believers to atheists, who wanted to experience silent retreats over a period of weeks. These stories were encouraging about both the integrity of the film crews and the way that one or two of the volunteers found a lasting faith.

But the part that will stay with me most was the section about the right and left sides of the brain. Simplifying his comments somewhat, he described how a person who had suffered a stroke in one or other side of the brain would react differently if asked to draw an oak tree. Someone with a functioning left brain only (the analytical side) would draw an accurate version of half a tree, while someone with only the right side functioning (the more conceptual side) would draw a fuzzy version of a whole tree.

Fr. Jamison was illustrating how bible study appeals to our reason and we often neglect the more ruminative right side. What also struck me, however, was the way that rationalists do a similar thing when attacking faith. They may be true to their left brain, but it is not an integrated and holistic approach.

5. Sunday Morning Communion
Always the heart of the festival, when everything else shuts down, the communion service, led by John Bell and the Iona Community, was based around the festival's 40 years.

The service often succeeds more through Greenbelters breaking into small groups of twelve to share the bread and wine together than by what comes from the stage. There is something very powerful and emotional about that meeting of lives.

The service planers dug up 'old favourite' songs, such as “Our God Reigns,” in the first half of the service and also in a carefully-planned and slightly interactive talk section, compared life in 1974 with now, in the areas of female equality, a global perspective, and ecology.

Innovative as ever, the blessing was given in pantomime style, with a series of statements and the option of choosing from two responses: "Oh, yes he did!" and "Oh, no he didn't!" One statement read, "Jesus said, if a man slaps you on the right cheek, kick him in the goolies." Priceless.

6. Beer and Hymns
At Beer and Hymns, people drink beer and sing hymns. It's that simple. And people love it. This year the Big Top moved right next door to The Jesus Arms, so it was easier for some 4,000 to join in. http://www.pipwilson.com/2013/09/beer-and-hymns-at-greenbelt-gb40.html

It was just so right to formally close the fortieth festival with a man who has been a part of Greenbelt for years, since performing on his own behind an old piano that had a wind-up gramophone on top. This time, he had a full band and a 30-piece orchestra.

The Duke (Pete Wilson) has exemplified the festival's creative and faith-based take on life, forging a highly distinctive career that embraces both mainstream songcraft (“Last Night I Nearly Died”) and commissioned works, such as his tribute to Ruby Murray and the soundtrack to a theatrical performance of Mother Courage.

What pleased me about the Greenbelt set, which embraced both streams, was the amount of time he gave to songs from Behind the Dark Cloth, music commissioned by New York's Metropolitan Museum of Art to celebrate the lives of photographic pioneers. The songs are both sensitive and witty, as well as having some good tunes. 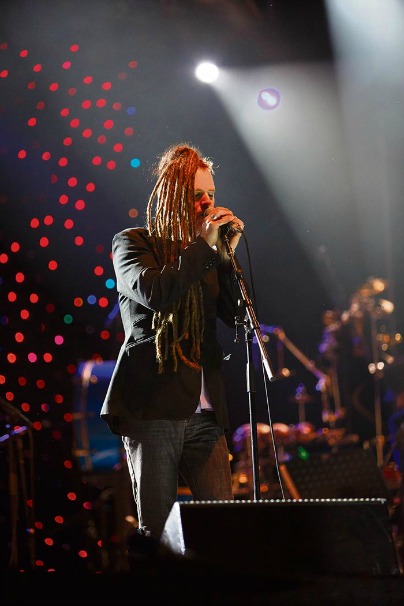 By contrast, he also played a stark and poignant cover of Joy Division's “Love Will Tear Us Apart.”

A wide range of songs, some played in completely new ways, unifying a large and diverse crowd says a lot about what Greenbelt has done over its four decades. This was the ideal finale.

And the rest...
There were plenty of other highlights. Bishop Graham Cray – a former festival chair and compelling speaker over Greenbelt's whole life, would probably have been number eight.

Martyn Joseph's The Rising event, a songwriters' panel performance, is always one to catch. Mali's Mariam and Amadou had some excellent grooves; Adrian Plass was entertaining, even if the tent he was in was too small for the crowd; Steve Chalke made a lot of people think; slam poet Harry Baker still exuded genius; Milton Jones was able to mix his comedy with thoughtful reflection; and the nostalgic re-formation of The Fat Band, with festival co-founder James Holloway as front man, compressed time like something out of Dr. Who.

Other parts were mixed: the radical theology strand seemed forced and a little pretentious; Sokari Douglas Camp's life-sized figures were impressive, but the visual arts strand depended too heavily on them; and Shonaba Jeyasingh Dance's “Configurations” - a story-free dance  to a  Michael Nyman composition, played by a string quartet – cleary wowed the Centaur crowd, but left me unmoved.

Hopefully, the U2charist will be repeated next year, so that I can finally catch it, along with a doubtlessly inspiring programme. Forty years of this was worth celebrating.

The festival lives all year round. Decades' worth of talks, images and more can be found here: