No smoke, no posturing, no pre-recorded tracks – the show was about as free from pretensions as any I've ever seen – and when it was all over, as the last chords of "I Love You #19" left us with a satisfied rock & roll rush, there was a spirit of community...

Without question, it was a kinder, gentler Daniel Amos that played the generous career-spanning set at Christ Community Church in Camp Hill, Pennsylvania. The edge is still there, the lyrics surgically sharp when skewering a sacred cow, yet frequently full of poetic imagery, spiritual metaphor, and transparent, confessional, awe-filled wonder. Oh – and they rocked the house.

In other words, little has changed except maybe for us (and by 'us' I mean the band and the audience) – a generation that went through adolescence and young adulthood having to explain and defend its dress, music, and particular style of finding God. Now we all look back and see that we were both right and wrong, went too far and not far enough, and yes – even had our own 'hipper than thou' brand of hypocrisy (even though we assumed that the older generation owned the copyright on mask-wearing). Yes, we're all older and wiser, and more reflective. The realities that come through living life long enough to have learned lessons, experienced tragedies, and lived into the tarnished 'future' (that we'd hoped would be easier) seemed to form a bond between the audience and the band on this balmy Friday night.

The current band line up consists of Paul Averitt on bass, and 'classic' band-members, Ed McTaggert on drums, Jerry Chamberlain and Greg Flesch on guitars, and songwriter/singer/guitar player Terry Taylor, the driving force behind Daniel Amos, acting as your host.

These days, Taylor's stage attire reminds us of when men wore hats (since his is always in place), and the black-rim glasses under the rim add a slightly Captain Beefheart-ish demeanor (but there were moments when I saw a resemblance to Mr. Dylan as well). Taylor's voice was in fine form, slipping in and out of the familiar falsetto moments and using that distinctive vibrato to recreate classic Daniel Amos tracks like "Ghost of the Heart" and the haunting "Sanctuary." Chamberlain still attacks his guitar the way he did years ago, coaxing staccato chords and tight riffs from it as if they were old friends having a friendly fight. Ed 'Timekeeper' McTaggert commands Ringo-esque patterns out of his kit, perched behind the rest of the band, his hair amazingly long and quite snowy. Flesch played with passion and precision, adding fire to the music throughout the concert. Vocal mikes were in front of all but Flesch, allowing for that rich DA harmony, when called for.

In an almost two-hour show, the band performed just under twenty songs from all aspects of their decades-spanning catalog, including such crowd-pleasing favorites as "Mall All Over the World," "A New Car," and "Endless Summer." Chamberlain contributed a solo spot, performing "Man in The Moon," his composition from Horrendous Disc, to the appreciative crowd. This was followed by the band re-forming onstage as Taylor told the story of the group's first time in a recording studio, recording "Ain't Gonna' Fight It" for Maranatha 5. A particular highlight was hearing the band perform the dramatic, weighty "The Twist," from Taylor's 2010 solo project, Swine Before Pearl Volume 1, which was (for me, at least) one of the musical highlights of the concert.

Without the choreographed precision of current concerts, where a song is barely over before the guitar tech swaps the just-played

guitar for a fresh one, Daniel Amos simply played songs and Taylor talked to us about the songs, about life, about family. No smoke, no posturing, no pre-recorded tracks – the show was about as free from pretensions as any I've ever seen – and when it was all over, as the last chords of "I Love You #19" left us with a satisfied rock & roll rush, there was a spirit of community: of just having been with friends that you haven't seen for the longest time.

And, you know – I guess that's exactly what it was ...and I have a feeling that Terry Taylor is feeling the same way. 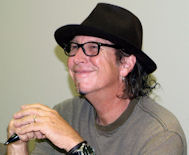