Sixpence None The Richer in Concert - NYC

Brooklyn is the largest borough in the city of New York, the legendary home of Ralph Kramden, and has the best pizza and knishes you'll find anywhere. The neighborhood of Williamsburg has in recent years also become somewhat of a hipster hangout and an influential hotbed of indie rock. On this particular night, the iconic Sixpence None The Richer was performing at The Knitting Factory, one of the better-known of the area's many rock venues.

Surprisingly small for such a well-known room, The Knitting Factory is one of those box-like music spaces that pretty much amounts to a stage up front, a floor, and a bar in the back. Although the online billing didn't mention any opening acts, and that the show would be at 7:30 (doors opening at 7:00), Sixpence actually appeared sometime after 10 p.m., following two openers. They were worth waiting for.

The alternative rock scene as well as the CCM crowd welcomed the indie-sounding band with open ears when their debut album, The Fatherless and The Widow, was released in the early 90s. As crossover success, TV appearances and mega-hit singles followed, it became more and more obvious that, as hooky and memorable as these pop tunes were, it was the unmistakable tone of the slightly quirky lead singer that people identified with. Now, after a four year break and Leigh Nash successfully establishing herself as a solo artist, when Sixpence plays, the focus is unmistakably on Nash.

This is not to diminish the contributions of Rob Mitchell on drums, Justin Cary on bass or founding member Matt Slocum on guitar. Each player had moments of glory through the night's performances of solid numbers from their catalog, the familiar hits ("There She Goes," "Kiss Me"), Leigh Nash solo songs ("Ocean Size Love") and, of course, "Sooner Than Later" and the single, "Radio," from their excellent new album, Lost in Transition.

Throughout the night Slocum created worlds of texture and rhythm on his guitars. Often choosing washes of sound over note-filled solos, his sound-painting worked to best effect on songs like the show-stopping "A Million Parachutes." On that same song, bassist Justin Cary's fingers did a spidery dance up and down the neck of his bass, producing passion-filled, fiery melodic runs punctuated by symbiotic percussion from Mitchell. All of this instrumental majesty followed Nash's emotion-filled vocal and brief exit from the stage. If there was a high moment of the evening, this was it – Sixpence None The Richer full strength, at the height of their power as musical artists.

It all still comes back to Leigh Nash. Last year's solo tour seems to have given her some additional gravitas as a performer. The quirky waif of the 90s is now a seasoned artist who, like so many other iconic singers, seems to carry the faintest aura of sadness somewhere inside that reaches out to the audience's collective soul. The voice still has that identifiable timbre but there's power and confidence behind the delivery – not an arrogant confidence, but a confidence that seems to say, 'I know who I am and I'm okay with it.' Often seeming to get caught up in the music, Nash seems almost to be letting the songs heal some inner pain. 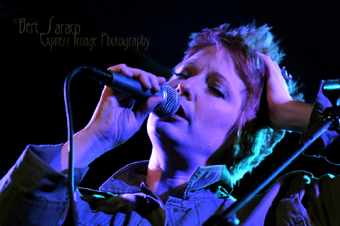