How record stores had their day – or will they rise again?

The riff to “Smoke on the Water” may be a cliché now, but it made such an impact on me when I first heard it as a schoolkid, that I still remember standing at the bus stop in the way home, desperately trying to keep it in my head.

I had been listening to Machine Head in a local record shop, in a black-felted listening booth, where I and my friends frequently hung out after school, trying out the new releases that you hardly got a chance to hear on radio (unless secretly listening to Radio Luxembourg under the bedclothes).

Those who share such warm memories are likely to enjoy this short documentary on the story of the record store, in which Paul Weller remembers staying in the booths “until they kicked you out.”

Last Shop Standing is largely talking torsos and draws on the experiences of over a dozen store owners; musicians such as Norman Cook, Johnny Marr and Billy Bragg; Radio 6 DJ Jo Good and various industry figures, including Graham Jones, whose book this film is based on.

There’s a slight Liverpool emphasis at the start as one owner remembers how American servicemen stationed nearby requested copies of records by an Elvis Presley, whom they took to be a country singer. They recall how “78s were great sellers: buy one, break one, buy one, break one…”

The same owner commented on the sudden rise of the Beatles a couple of years later, “We couldn’t believe that a gang of boys who came into the shop could be so famous.”

The documentary does not linger. The rise of the independents covers the 1960s in four minutes and the 1970s in even less, bypassing the years of glam and prog to head straight into punk. The 1980s, when “record companies were sloshing in money,” covers hyping music into the charts and the transition from vinyl to CD; then the 1990s – with the emergence of Napster, MP3s and supermarket competition – sees the first signs of decline. 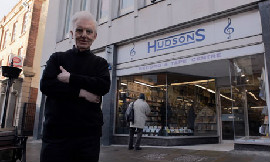 It is poignant to watch Keith Hudson from Chesterfield picking over stock as he closes down his shop, which had lasted for over a century, but the film also shows signs of hope, with hundreds queuing on Record Store Day.

One of its strengths is its stories. A shop owner plays a piece of vinyl to show a scat singer who deliberately sounded like he was using the f-word, but actually was making chicken noises. Jones tells of the customer who believed the CD marketing hype and wanted a refund when he could not eat his dinner off one and still play it.

That is where the frustration lies for me in this documentary. It is well-paced, easy and fascinating viewing, because the script is almost end-to-end recollections and sound-bites from people passionate about their profession. While such a taut script works for TV schedules, given the amount of footage that must have been collected, a longer Director’s Cut or some extras would be appropriate for DVD. However, the film was crowd-funded by 170 benefactors and made within a month, so it was made under pressure.

While the nostalgic element is undeniable, this is about looking forward as much as back, wanting to support the stores that are more than just shops and noting their survival strategies (although sadly, a Brighton shop that looked strategically strong during filming has since closed down). They are local centres of cultural knowledge and small communities. One owner even describes it as a calling. There is something deeply human and personal about these stores and this film records something precious.