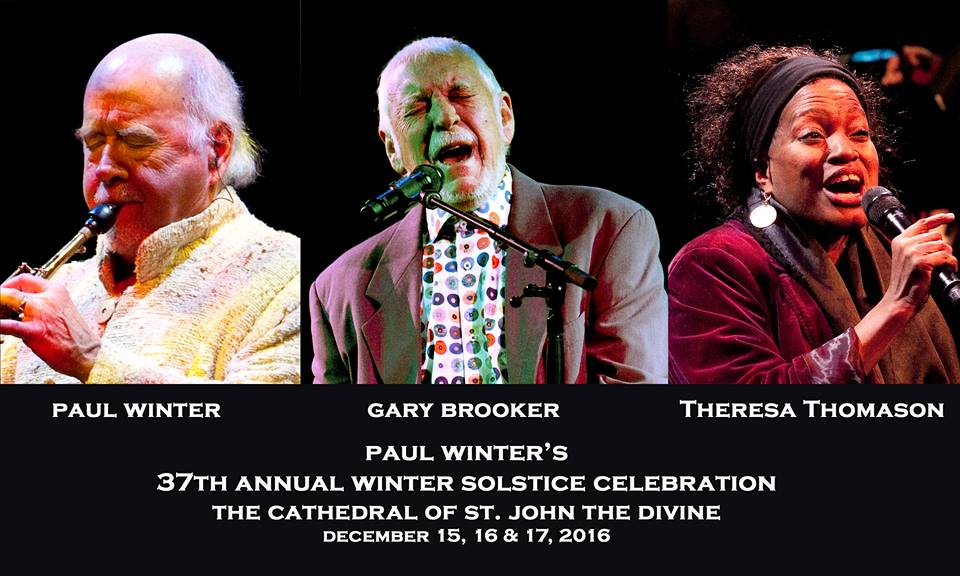 A whiter shade of Winter

The Cathedral of Saint John the Divine, NYC

What's a few years between friends? How about, oh let's say forty years? It was four and a-half decades back, more or less, that Paul Winter's group, Winter Consort, shared billing at the legendary Fillmore East with Procol Harum, one of the classic rock era's most iconic bands. Responsible for one of the biggest-selling singles in the history of pop music (“A Whiter Shade of Pale”), as well as being a forerunner of the 'prog' and 'art-rock' genres, Procol Harum's bluesy, baroque, sometimes classically-influenced brand of rock and roll is largely the product of Gary Brooker's guiding hand. Winter, who was more into jazz than pop music, confessed that Gary Brooker's strong compositions, soulful vocals, and occasional use of orchestration made Procol Harum one of his favorite groups. And speaking of confessions, what better place than New York City's Cathedral of Saint John the Divine?

For the 37th time, Paul Winter has brought his multicultural holiday extravaganza to the cavernous gothic cathedral (so huge that it’s said to possess the same seven-second reverberation as the Grand Canyon) and as usual, a diverse and storied cast of performers was featured. Aside from the legendary Gary Brooker, the event included performances by gospel singer Theresa Thomason, the Forces of Nature Dance Theatre and percussion ensemble, Paul’s core musicians (recreating the sound of the original Winter Consort as well as performing with Brooker), a mammoth ‘spiral’ Solstice ‘Tree of Sounds,’ and yes, a man hoisted up to the highest point of the cathedral, bathed in red light and banging a sun-shaped gong to a background of gothic organ music. You know – the usual.

It was a memorial service for the late Sir George Martin, the man that sat in the producer’s chair on The Beatles’ main body of work that brought Paul and Gary together again. Martin had also produced Brooker’s first solo album as well as Winter Consort’s iconic Icarus album. It was at that service that a plan was hatched to perform together again at last – and when better than in the Christmas season? And why not make this year’s Winter Solstice event be, at least in part, a tribute to Martin? The stars were properly aligned, we hit New York’s first real cold snap of the season, and it was a Gridlock Alert day in NYC – what could be better?

Paul Winter’s signature soprano sax tones signaled the start of the evening, this, the first of four performances over the weekend. All heads turned to the back of the cathedral where Winter had magically appeared in the uppermost rafters. Music seemed to come alive from all points in the hall (expertly mixed, by the way – kudos to the sound man). The sax man did eventually appear on stage again, playing host and creating haunting, melodic lines from his instrument, making sure to walk in a circle while playing so that audience members on each side of the two-sided stage could get a good look at the performance. Scaffolding on each end of the stage platform left space in the center for roaming sax-players, dancers, and classic rock icons to do their thing while keeping the show moving seamlessly.

John Lennon, who was assassinated in this very city 37 years ago, almost to the day, was remembered by Brooker performing “In My Life,” with Winter replacing the harpsichord solo with a mournful but beautiful sax solo.

There was Bach, there was gospel, there were gongs and earth-globes rising to the rafters, there was dancing, howling, and Gary Brooker and Theresa Thomason singing “Silent Night.” Paul Winter and his ensemble performed “Icarus,” and of course Brooker sang “A Whiter Shade of Pale,” among other Procol Harum songs.

As the final concert is taking place, the streets of the city have turned a whiter shade of winter from the previous night’s snowfall. Inside the cathedral Paul Winter and Gary Brooker are about to take to the stage for the fourth and final celebration of the series - and if the members of the audience have their way, it will happen again next year, just like the winter solstice, because Winter and Brooker still have the ability to mesmerize and excite a crowd large enough to fill the world’s biggest cathedral. Four times. On the coldest weekend of the season. In the first snow.