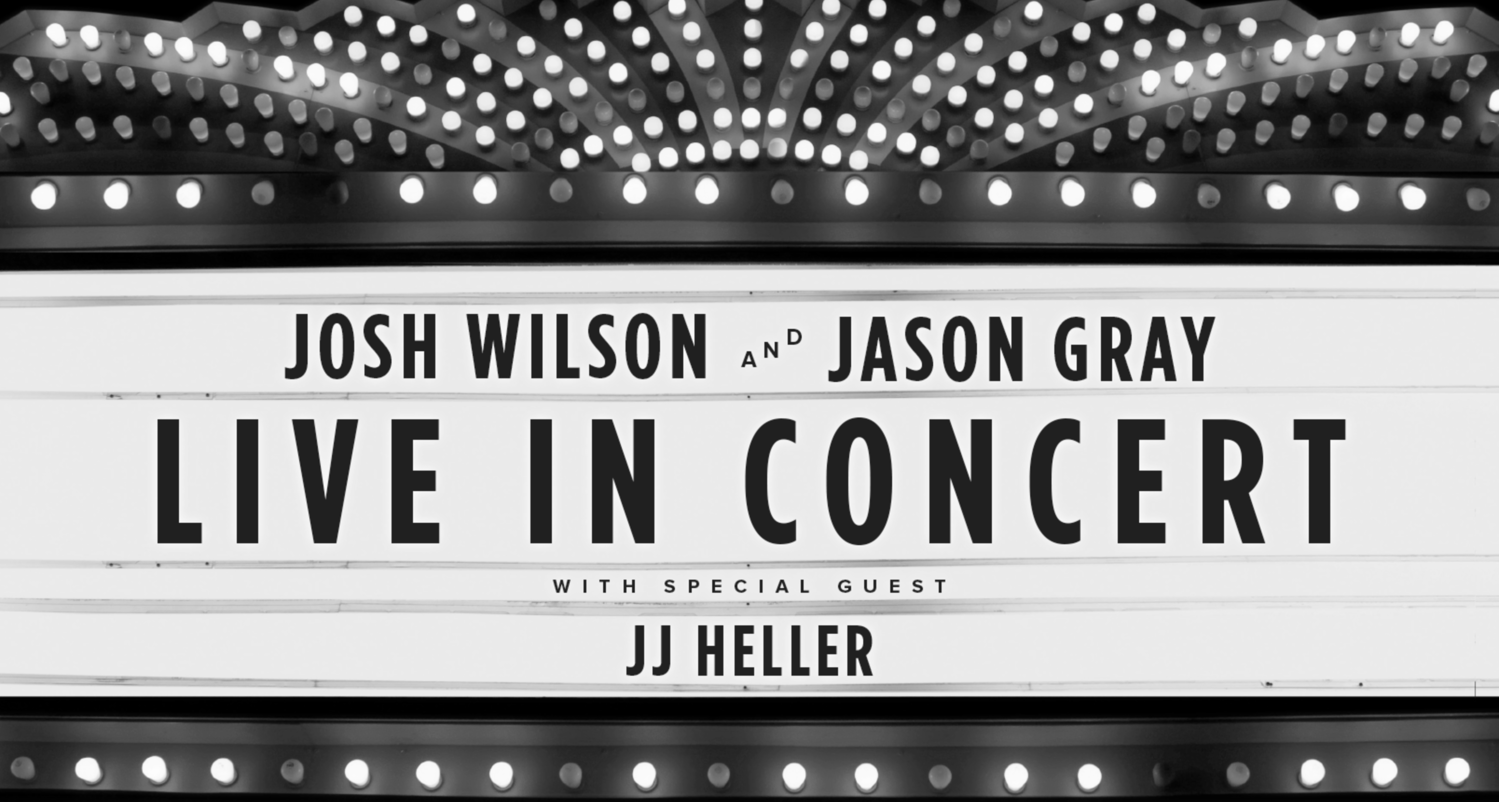 Here's trusting that Jason Gray, J.J. Heller and Josh Wilson get along off stage well as they appeared to do so on the stage of a county fairgrounds rec center in a concert to help a church about a half-hour away fete 20 years of ministry.

Perhaps the arrangement of two guys and a gal alternately trading off and collaborating through one show with the same band has toured within contemporary Christian music circles since the late '80s. But the combination of Gray's and Wilson's testosterone and Heller's estrogen recalls, at least superficially, the dates Michael W. Smith, Amy Grant and Gary Chapman played together over a quarter-century ago that seemed to solidify an attainment of status of celebrity for cCm.

There was no such pretense nor vaunted expectations this evening. Contempo' Christian music seems to have been commercially eclipsed by the related, but lyrically distinct, praise & worship genre*;though there was some vertical communication to the Lord in song during parts of the show, it was still a bit funny to hear one of the sponsoring church's pastor's introduce the night as an invitation to worship. Wilson, Heller, and Gray have been bankable forces on Christianny radio of various sub-formats throughout the decade, but none has broken out much in the way of general market acceptance nor humongous evangelical subcultural notoriety.

So what? An event this big with this low an admission price, even for the first few rows of reserved seats, doesn't come around here all that often (20-60 miles north or south, but not strictly here). And there were about 900 listeners to the local K Love outlet and the nearest independent cCm FM, the latter of which had a booth in the back of the hall not far from singers' merch' tables and the set-up for the child-sponsorship charity that's helping to keep the headlining trio on the road, who came out for it. Few, if any, likely left disappointed.

All three of the featured singers could be loosely catagorized as singer-songwriters with folk, even Americana and commercial radio country, allusions, smoothed over to one degree or another by the gloss the Nash Vegas Christianny music machine affords its output. Gray started out with arguably the slickest selection of the show, as the God-inferring "Celebrate" could almost pass for the sort of electronic dance pop crowding the often juvenile pop chart in recent years, save for Gray being pretty jubilant about his subject matter. All three singers on the ticket would have at least as much fun assaying the Kool & The Gang's evergreen "Celebration" to open their second set, wherein Heller would deliver a hands-free harmonica solo of one discordant chord, Wilson would rub his mic against his beard** and Gray, apart from messing with the original vocal phrasing, gave a "tall" solo, wherein his 6' 6" frame stood silent for a few seconds.

Gray's medley of uptempo radio hits, accompanied by lyrics video snippets, engaged cheerily enough, as did his admission of a rivalry between his native Minnesota and Wisconsin, based on pro football loyalties. Confessing his stuttering affliction in a matter of fact manner made him that much more empathetic as well. He was the one concert's three artists to take the deepest plunge into gravity, though. Perhaps because Christian market pop shows are so often lighthearted affairs, Gray joked a bit before plunging into his final poertion of the show's second set with songs about...pain. Here guessing that "Not Right Now," about the legitimacy of feeling grief, and the ultimately celebratory de facto titular track of his latest album, "The Wound Is Where The Light Gets In" will remain deep cuts, as they're certainly not the sort of happily affirming nor anthemic ditties by which Christianny radio fairly thrives. Prefacing one of his quartet of "dark" numbers with a bit of Prince's "Thieves in the Temple," which Gray said he heard as a prayer, and singing into the hole in the middle of his acoustic guitar and looping the vocal some, referenced his Vikings state roots while making a relatively gutsy aesthetic move.

"Gutsy" probably wouldn't be among the first adjectives to come to mind to describe J.J. Heller upon first seeing her. That may be before she would tell them of her having overcome, with God's help, anxiety attacks. With her husband accompanying her regardless of whether the band was in tow wth him,. there's a sweetly artless graciousness about her persona, whether she's showing pictures of her adorably cute pre-tween daughters or instructing her audience to sing along and move like a gospel choir to back her up on the chorus of "The Well"*** that evidences her hard-fought ease.

Those kids of the Hellers inspired an album of lullabyes, from which she sang "The Boat Song." In one  the night' two sickness-inspired anecdotes, J.J. told of how she's been giving a copy of that children's CD, I Dream of You, to a such a healthcare facility for every copy purchased, with over 5,000 freebies doled out this far. The other story is that since a member of the church bringing in the concert couldn't make it because she's suffering from leukemia, all three performers put on a concert just for her in hospital. I'd think Heller's un-fancy, often confessional approach might have worked best among the three acts on the bill. The title track of her upcoming Christmas album, Unto Us, may have given the fortunate patient in question an especially palpable hit, besides a pleasant ear work, as the Nativity's season approaches.

Josh Wilson may be the most typical of the headliners here, but that's no dismissal. If his approach sounds almost like a laboratory-bred hybrid of Steven Curtis Chapman's earnest applied Christianity, Matthew West's way with a catchphrase and Phil Keaggy's (and, perhaps, pop country hit maker Keith Urban's) instrumental virtuosity, Wilson's is a genial, apparently genuinely heartfelt expression of what might have been a cadre of Music Row execs' fever dream. Wilson's is exceptional at cCm's bread and butter.

He upped Heller's kiddie quotient by showing vdeo of his son, Asher, while playing the song daddy write for him:bonus points for the band's keyboardist syncing wth the bits in the vid' where the tyke bangs on a toy piano. Adopting a saying from his wife, "Life's too short to be too cool" for "Blown Away" keeps the songwriting in the family all the more. "I Refuse," with a title that seems all negative but implies positivity, could be Wilson's perennial, but he has plenty other memorable morsels. The same could be said of his guitar playing, utilized on a rendition of an instrumental version "Amazing Grace" found only on the unplugged album of remakes of his own songs and favorite hymns (only available at concerts for now). Whether he used the same looping device as Gray, Wilson's results would do fellow loopers such as Keaggy and Robert Fripp proud.

He, Gray and Heller joined forces to conclude the proceedings for a simple p&w chorus, "Thank You For Loving Me." Songs of so basic a nature sung to the Lord usually don't sit well with me, but it would be a pleasure to sing that one on a Sunday morning well as that Friday night.

Encores? No, but none were necessary for the this already aristically fulfilling occasion. Even if the church planned for attendance of 1200, the 3/4 full house experienced a night of unapologetically mainstream, but well executed cCm.

*Or it should;much as it grieves me that he seems to have gone over to the emergent/Wild Goose Festival dark side, T Bone Burnett got it right back when he spoke of Christian music being about the Light or what a believer sees in it. It's that distinction that I believe ought to define the diffewrence between praise & worship tunes from cCm proper.

**In another context, perhaps in the art gallery in a bigger city where I took in an industrial/power electronic concert earlier this month, doing that could be seen as pretty experimental and not merely a goof.

***And yes, since she mentioned choral gospel, the song would work well as conducted by Hezekiah Walker, Anthony Brown, J.J. Hairston, or, sure, Kirk Franklin.