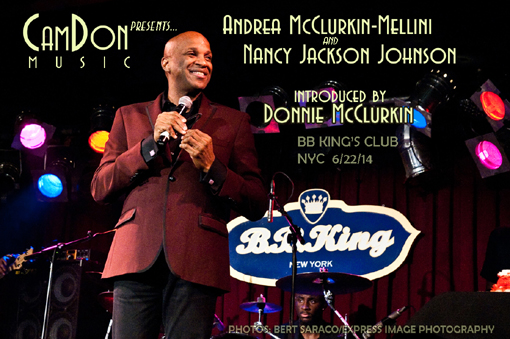 It was a Sunday night in New York City. Some folks in church, some in clubs. Then again, some were at church in a club – BB King's Blues Club, to be exact. You see, on this particular Sunday night Gospel legend Donnie McClurkin was hosting a CD release / new label party in Times Square. Yeah – it was church.

I'm not sure, but I think it's in The Gospel Music Association's bylaws that any gospel group appearing at BB King's Club has got to make the "but we're here tonight for the King of Kings" joke to keep their membership in good standing. It surfaced at least twice at the show, so everything's cool.

"Camdon Music: Where Music Meets Ministry" - the words were on leaflets and on the two screens at either side of the stage at various points throughout the evening. This night was designed to highlight Camdon Music's premier artists, Andrea McClurkin-Mellini (Donnie's sister) and Nancy Jackson Johnson. Preceding these artists were a gospel 'dance choir' (Judah Camp?)combing elements of Tye Tribbett and Kirk Franklin to produce a dynamic musical one-two punch, and Duawne Starling, a passionate and soulful vocalist.

After a videotaped introduction, Andrea McClurkin-Mellini ("a good Italian girl," joked Donnie) took to the stage backed by a dynamic four-piece band and occasional back-up tracks. Covering several songs from her new album, Higher, the songstress displayed a versatile set of pipes that could deliver a jazzy balled as easily as she could get funky. Personable, gifted, and polished, Andrea quickly connected with the packed house.

Being referred to as Camdon Music's flagship artist, Nancey Jackson Johnson took complete control of the stage as soon as she stepped onto it. A dynamic, charismatic performer, she commands the stage front-to-back and side-to-side. Emotionally honest and transparent in her style, Nancey pierces the formalities of a performance and gets right to the heart. Sometimes scatting, sometimes shouting, and able to deliver a powerful gospel ballad with the best of them, Nancey Jackson Johnson is an artist to watch.

Careful not to upstage the featured performers, Donnie McClurkin finally came onstage at the end of the show to explain the concept of Camdon Music: a label that will feature new, upcoming artists and a label that will mentor those artists in the ways of the music business, from concept to presentation.

Referring to himself as an elder statesman, McClurkin explained that there's a time when you know you need to step back and let others come to the front line. As noble as that statement was, calls for Donnie to sing kept up, even though the legendary singer declined, emphasizing that this wasn't his night...

Okay, so he finally gave in. Calling some members of the audience onstage and directing the band, McClurkin alternately became choir director and soloist – I can say without reservation that the man's voice can still send shivers down your spine and make the inspiration rise inside you. Yes, BB King's became church. Donnie might be passing the torch but he can still set the house on fire...

True to his conviction, Donnie presented the gospel to the crowd at BB King's 'till the management turned the lights off on him – twice. "I guess that's supposed to be a hint," he said, "but I'm gonna' finish." And he did.
Let the church say, amen!