Somewhere at a secret location on Grand Island, NY, also known as this reviewer's home . . . "Yeah, it's a bit tougher to be objective when a band you like comes and plays in your front room, in the spot where your recliner usually sits. . ."

Hard to exactly explain what all of this meant.

I was a late adopter of TVB. Actually I shunned pretty much anything but secular music for the majority of my years on the earth. I was gently ushered into a deeper relationship with Jesus about 7 years ago and ended up being on a worship team and thus, exposed to tons of stuff I'd never heard. About 3-4 years ago I heard the Violets and was entranced. Actually at first I think I shrugged them off when a friend played the album Strength for me. I was probably just feeling cantankerous or needed more coffee. It really hit me when I saw some clips from The Loudest Sound in My Heart DVD. Whoa, here's a band that was clearly influenced by the music I loved, wore their hearts on their sleeves and loved Jesus in a real and honest way. I then collected (with help from a few Internet people who were kind enough to swing crazy great deals for out of print stuff) pretty much anything and everything they recorded. In a short period of time, they became my favorite band. The more I studied them, the more convinced I was that I'd never see them play live. In the past few years they have rarely played in the US, usually a one off gig in SoCal, or played dates in Europe. They became the only band that I would actually travel to see.

Fast forward to late last year and early this year, their website finally is re-vamped and there's chatter on the wire that they're working on not one new album but a triple album. Then, there's an announcement that they'll be touring in support of the release, including the northeast. I check the tour dates and to the best of my interpretation of the data, the Pittsburgh area is the closest they'll be, and it's a Saturday night gig which won't work for me.............bah, dang it.

They post on Facebook that they're looking to fill in a few dates in the NE and I, on the urging of my wife, message them to casually inquire if they'd consider a house show here on Grand Island. A gracious reply said that they would indeed consider it and the ground work was laid. I only had about 8-9 days to round up enough folks to make it worthwhile, tough in this area and in light of TVB being like the best kept secret in the rock world, maybe ever.

Without going over architecture, square footage or relative distances from other dwellings involved, take my word for it that we live in a home that is pretty well suited for events like this. So much so that I took the liberty of setting up my drum set in anticipation of encouraging the band to play a full on rock show versus their more usual vibe/acoustic set that is generally thought of in the context of a house show.

When they showed up and saw the drums and I inquired about them doing a full on rock set, they hesitated not one bit. It was later explained that they were in the middle of a string of more low key gigs and the chance to play full on was a nice change. We had the pleasure of hosting dinner for them and Michael, Darryl and Lenny were gracious and engaging. 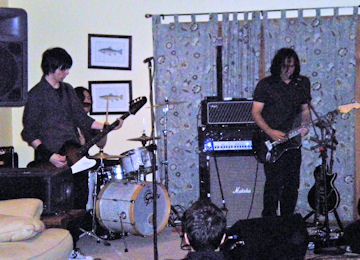 Folks showed up and the Violets took the stage, errr, corner of the front room. From the opening of "Where it All Begins" it is clear that this a finely honed rock machine. The sense of control over dynamics and timing is breathtaking. The material off the recent triple release pulses with emotion, the quieter pieces like "The Light Poured Down on Me" mix well with older favorites like "As I Am" and "Underwater." The heavier pieces are just devastating, "Rock is Dead," "Imminent Collapse," "My Name is Night" and "Machine Beat Sabbatha" are just crushing in their heaviness. The transition over to a heavier guitar sound on the last release puzzled me a bit when I first heard it but live it is incredibly effective. Despite the craftsmanship and layering that is the domain of the studio, live the songs sound huge, this with only a three piece is pretty amazing. It also becomes apparent how tightly this unit functions. The rhythm section is efficient and synchronized as only the best bass/drum duos in rock can be. The balance of the band is also noteworthy. With a pretty modest PA and a jazz sized drumkit they managed to create a mix that allowed vocals to fit with the heavier guitar sound. The bass sound and style (use of a pick for the most part) and the drums/cymbals remained defined as well which is not always the case, especially with a huge guitar sound.

Michael was candid and shared thoughts between songs in an easy manner, fully engaging the small but enthusiastic-if not especially familiar with the band, group of folks. The crowd was called upon to provide backing vocals for some of the quieter acoustic songs, not unusual for those familiar with TVB or M. Pritzl solo gigs and it was great to be part of the music. Lenny played violin on most of the acoustic songs and provided some of the familiar riffs missing when you play songs like "Gorgeous" as solo acoustic pieces.

They ended up playing for a shade over 90 minutes, every song felt like it was done the same for the 23 people that were in attendance as it would have been at Greenbelt or Flevo to thousands of fans. There was conviction and an openness in performance that few bands I've seen can lay claim to.

Yeah, it's a bit tougher to be objective when a band you like comes and plays in your front room, in the spot where your recliner usually sits but it's also tougher on a band when they're playing 3 feet from some of their biggest fans interspersed with people completely unfamiliar with their music. Both groups were won over pretty early on in the evening.

I can't imagine touring in a min-van, having deep conviction about your art and never breaking through on any real world level in the industry. How Michael keeps the drive alive to create and release vital and stunning music is just slightly short of incredible. Not wishing to lapse into sycophantic spewing here I only babble to say that it remains inconceivable that he and his band remain virtually unknown outside of small pockets of rabid fans and followers. Releasing an epic and monolithic triple CD The Story of Our Lives at a time when the industry is barely able to survive, the line between genius and madness appears so very thin. Although TVB have always been outsiders and it hurts them in terms of garnering more support and attention, it's right where fans of their music (like your somewhat loopy writer) finds them most attractive.