Never one to use a straight 4/4 when a 13/12 rhythm will do, Bainbridge's musical spirit flies free on this prog tribute, as colourful, rich and majestic as the Hubble image that covers the digipak.

Surely every Iona fan who has been keenly awaiting this release will be delighted by what is probably Dave Bainbridge's best solo work – and one stronger than most of his duet collaborations as well.

As it begins (the short "Heavenfield"), this could be Iona, not least because Troy Donockley's Uilleann pipes feature and Bainbridge's keys are only supported by subtle percussion and Sally Minnear's equally restrained vocals. The same quartet continues augmented for the title track, which has the feel of an Iona epic, but with an added boost of proggishness. Why do we not hear on Iona albums such powerful, single-minded synth breaks as he plays late in "Celestial Fire"?

Bainbridge said, as he started this project, that he was playing up his early inspirations, such as Mahavishnu Orchestra. They are easy to spot, even without the heads-up. Sometimes it seems that single lines get put in just to play tribute. Even by the second track there are several cameo Tony Banks keyboard effects, such as an organ bit that could have been lifted straight from Trespass; and "Love Remains" displays both piano and organ that is reminiscent of Keith Emerson. But the overriding influence has to be Yes, both Relayer-era and later incarnations. It echoes in the sustained guitar lines, shouts from the arrangements, especially those Anderson-esque vocal structures, and flashes blindingly from Randy George's bass work (the inside artwork - no expenses spared - shows him playing a Fender precision, but I believe he played a Rickenbacker to accentuate the Chris Squire effect).

As the disc moves into the third track ("See What I See") the sound moves firmly away from Iona and sees Bainbridge soar on rockier, almost American, wings. Damian Wilson's vocals help to make the sound more muscular and the whole song is more direct, whether the simple riff or the harmony-rich Asia-like chorus. It has the memorable lines that Iona is weaker on and again, George's bass is on a stellar level. His playing enhances the riffs, but dances free-flowing in between them. Hearing how high he gets sometimes, he must have his left hand so far up the fret board that it is actually halfway up the lead.

The beauty of a solo work like this is the chance to bring in specific musicians for specific tracks. George has already had his mentions, but we also get Sally Minnear (daughter of Gentle Giant's Kerry Minnear); Threshold's Damian Wilson (who has also featured in Les Miserables); Collin Leijenaar, known on this site mainly for his work with Neal Morse, and some help from Wet Wet Wet's Graeme Duffin. Yvonne Lyon shares lead vocal duties, but also helped to shape the lyrics for the collection, along with her husband and Bainbridge.

The lyrics have a powerful spiritual focus, a couple looking at the links between faith and music, such as the title track, inspired by C. S. Lewis's Aslan singing creation into being and the highly melodic and majestic "In the Moment" (another 15-minute track) 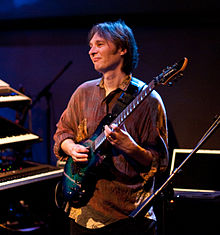 inspired by an event triggered by Iona playing "Reels" in the late 1990s. It doesn't have the Celtic feel of that track, but does feature a smooth, soaring guitar solo (before a bolted-on Focus/ELP organ solo). Possibly the best track, "Love Remains" is a paraphrase of the famous love chapter in Paul's letter to the Corinthians. Others pick up on God's recreation and the glorious hope and freedom of faith:

"You see frustration, dreams locked inside
I see a door, opening wide.
More than the failure that tears can't forget
I see a future in place of regret."

I struggle to find any weaknesses here. Yes, there could be a few extra hooks, but this is symphonic prog; hooks are not the point. I have played it many times and it just keeps getting better. With so much packed into its 74 minutes, there are always more thoughtful details to discover. There really is no filler.

He has managed to build on his influences, taking the right bits for the right songs, while avoiding that massive trap of prog solo work: self-indulgence. Never normally one to use a straight 4/4 when a 13/12 rhythm will do, Bainbridge takes a more direct approach here. This is a crowd-funded work and so plainly something more than some contractual obligation, but I have still never heard so much emotion in one of his releases. That he is impassioned about releasing this into the world blazes into the night sky like some Batman call.

A band is all about limits and compromise, so that the collective creative spirit is stronger than the sum of its parts – clashing views cut out the weaker bits that don't carry everyone with them. But this album is the exception to the rule. There are times to be yourself and this disc is one of them. Simply put, Bainbridge is set free from the confines that should make Iona a stronger unit, each one reined in by the others. His music consistently soars like it rarely has before.

OK, I'll say it: I actually prefer this even to Iona.

DISCLAIMER: It is fair to the reader to state that I am one of the crowd-funding contributors, but the success of this album does not benefit me in any way and the review is written with the same set of standards that I try to apply to any release. DJW