Warning: "continue" targeting switch is equivalent to "break". Did you mean to use "continue 2"? in /home/aws_tollbooth/tollbooth.org/plugins/system/jsntplframework/libraries/joomlashine/template/megamenu.php on line 228
 The Phantom Tollbooth - The Maze Runner

Fans of the popular book series The Maze Runner can finally see their beloved characters come to life on the big screen.

Fans of the popular book series The Maze Runner can finally see their beloved characters come to life on the big screen. The film was supposed to release in February but was pushed back until now. It is safe to say that it was worth the wait for fans of the book series and for those younger adults who want a strong action packed sci-fi flick. Though it has a predominately male cast the teen fan-girls are getting behind the film in droves.

Thomas (Dylan O'Brien) wakes to find he has been thrown in with a bunch of other teenaged boys at a remote location. He has no memory of who he is or where he came from. He discovers that he is not alone in this. As he is welcomed into the fold he learns that over the last three years they have all arrived here one by one in the same manner. His only chance for escape is to navigate a huge Maze that other “runners” before him have tried to maneuver through.

There is a lot of dynamics to this film other than just a crazy maze. The boys have created a society where everyone has their own job. They vary in age and ability and everyone works for the good of the group. When Thomas begins to question the “rules” and tries to encourage others to plot an escape he is met by some opposition. This element adds some meat to the plot line.  The resistance comes mainly from an older member named Gally (Will Poulter). Gally wants to maintain the status quo. It is only when Teresa (Kaya Scodelario) arrives with some apparent memory of Thomas that escape becomes the only option.

This film is written and marketed for the older teen audiences but even adults will appreciate the look and styling of the film. It delivers huge set designs and the Maze is impressive. The characters are solid and well portrayed. Like most Sci-fi films this one will leave you with a few questions. Luckily book two is about to start production and hopefully many of those holes will be filled in. But for the most part you get a lot to chew on and the action keeps it moving nicely.

It is reminiscent of Lord of the Flies and stories of that nature. Granted this group of boys have done an expert job of designing and maintaining a community that is void of much savagery; unless it is needed to survive the “Grievers” that reside in the maze walls. These creatures are scary and brutal. Again fans of the book will like how they are brought to existence on screen. The script gives ample humor with some of the characters and this gives depth to the action. Plus it offers the audience an emotional handle to hold on to.

The Maze Runner is Rated PG-13 for thematic elements and intense sequences of sci-fi violence and action, including some disturbing images. The language is also something that parents should be aware of before taking their much younger viewers. Even the youngest of the boys has a tendency to spew a few profanities from time to time. The violence and peril may be a bit too strong for those more impressionable youngsters too. That said it is a very solid piece of filmmaking for fans of the books and older teens who need something to get amped about. I give it 4 out of 5 backpacks simply for that reason alone. 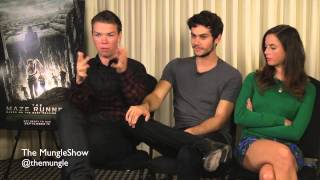