When National Geographic photographer James Balog headed to the Arctic, commissioned to record climate change images, he was somewhat sceptical about the issue. But what he found there turned an assignment into a passion. The multi-award-winning Chasing Ice is the account of how he returned to take a comprehensive set of time lapse images from several countries to let the world see the danger that we are in from an environment teetering on the edge of irreversible change. 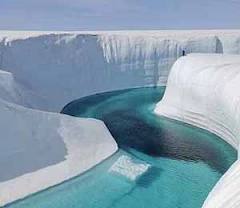 As a photographer Balog is attuned to shape, light and colour. The glaciers mesmerize him. “There is this limitless universe of form out there that is just surreal, otherworldly, sculptural, architectural – insanely, ridiculously beautiful,” he enthuses as the film starts. But to fall in love with the ice means to fear the speed at which it is shrinking. He likens a dying glacier to “a decrepit old man.”

In one hour of filming in Greenland, the team happens to catch a rare shot of ice calving; not just any piece of ice, but a vast section 1,500 feet long, which flops over like a huge white whale.

We see Balog developing a whole new and untested set of time lapse equipment to show the impact of climate change on the Arctic. The delicate electronic apparatus that recorded one shot every daylight hour over three years had to be able to withstand hurricane-force winds and temperatures of -40o. Balog is driven to tears by exploded batteries inside camera boxes, sandblasted Plexiglas windows, equipment buried under fifteen feet of snow, bird-pecked cameras and cables bitten by foxes.

Graphs show the increase of carbon dioxide parts per million in the atmosphere and the terrifying part is how much the gas has increased in such a very short time after thousands of years of stable, if cyclical, behaviour.

While the time-lapse images are impressive in showing how fast the glaciers are retreating, the most dramatic footage comes from a return to Greenland, where the team caught an area the size of Lower Manhattan convulsing and collapsing as melting waters pour underneath it.

The generous special features back up the film well. On top of a commentary track, the best are a substantial Q and A session from the Sundance Film Festival and a beautiful set of time-lapse images set to a new song sung by Scarlett Johansson. These display Balog’s eye for form and colour. Most striking are starry nighttime shots with sculptural ice reflecting the Northern Lights.

Director Jeff Orlowski has assembled a documentary that portrays one man’s passion for an issue of historic significance. It deserves to be seen.