A blissful assault on the senses.

David Attenborough has become synonymous with nature programmes, but he may now have a rival. John Downer has produced a series about birds that is genuinely breathtaking. 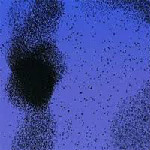 In Earthflight, Downer uses numbers to impress, showing thousands of green budgerigars swirling like starlings, thousands of snowgeese rising from the water like a moving Magic Eye and one of the world’s largest gatherings of flamingoes carpeting lake shallows. Neither is it just birds. He shows millions of flies looking like a dust-tornado.

As well as having a striking sense of aesthetics, Downer is a technical innovator. After a grounding on the much-loved BBC1 series Animal Magic, and making a name for himself with 1988’s Supersense, he won a Grammy in 1992 for his time-layering techniques in Peter Gabriel's Digging in the Dirt music video. But it is his work on bird flight that has been so remarkable. He secured the first ever in-flight footage of a golden eagle for the Wildlife Special: Eagle in 1997. Three years later, he introduced a 'bouldercam,' a mobile rock containing a camera.

"In-flight movies" are becoming his strongest point. In the 1990s, Downer reared a duck from the egg to gain its trust and fly alongside it in a parascender in order to get the close ups he wanted of the birds in flight. The hand-rearing, called imprinting, fooled the bird into thinking that Downer was its parent. He even had to take it to dinner parties to make the process work.

In Earthflight, Downer uses these close-ups alongside cameras mounted on the backs of birds. It gives such a sense of their shaky landings that it almost made me feel sea-sick watching it. It also lets the viewer feel what it is like to soar over the edge of the Grand Canyon.

Narrated by David Tennant, each episode of Earthflight follows groups of birds migrating across a different continent, making time to include iconic landmarks as a backdrop to these amazing close-ups. The first follows snow geese on their trek northwards from Mexico, past Golden Gate Bridge and Alcatraz in the company of pelicans and bald eagles. Elsewhere, we see Sydney Opera House, Venice, London’s Houses of Parliament and renowned temples.

This series is a blissful assault on the senses. Within two minutes of watching this six-hour nature-fest, I was starting to feel overwhelmed by the power of its stunning visual imagery.

What also sets this apart is Downer’s sense of drama and his delight in humour. The series may be about birds, but that doesn’t stop Downer from bringing in a huge shark that rises in slow-motion, lethal teeth bared, its mouth dwarfing the seal inside. Similar sea-creatures are filmed crashing against the shore in a feeding frenzy, with birds present to take their pickings.

The playfulness comes out when a vulture stalks a lion’s prey, taunting the beast, or a group of eagles play mid-air catch with a piece of meat.

Simply put, this is one of the most visually stunning nature series that I have seen. It surely cannot fail to impress and is highly recommended.