Elite Squad - The Enemy Within (DVD)

This tense, political action thriller about corruption is huge in Brazil.

Elite Squad – The Enemy Within (cert. 18, directed by Jose Padilha) is Brazil’s biggest-grossing movie to date with 11.2 million viewers after twelve weeks of release and is co-written by Braulio Mantovani (City of God). Although it is the sequel to 2007’s more violent The Elite Squad, it works on its own.

Returning from the first film, Lt. Col. Roberto Nascimento (Wagner Moura) has been promoted within the Special Operations Battalion of the Rio de Janiero Military Police (BOPE) and the viewer knows from the opening sequences that he is later targeted for assassination.

The drug cartel barons that have been running the city are now in prison, and operating from there unhindered. When one gang breaks out of its area and guns down a rival gang, Nascimento has to bring the riot under control, working with his friend André Matthias (André Ramiro). The gangs demand that left-wing human rights activist Diogo Fraga negotiates for them and the operation goes bloodily wrong.

Despite huge popularity with the ordinary citizens, Nascimento is transferred out of the way to a director role in Government Intelligence, while Matthias is demoted.

When BOPE clean up the drug trade, there is less commission for the corrupt police, so they turn instead to ‘protection’ and extortion from every business in the favelas, becoming mafia-like, and an even bigger threat to the city.

When Matthias is no longer able to help Nascimento clean up the mess, the only ally he ends up with is Fraga, whom he despises and who is now partnering his ex-wife.

The shortage of trust and the ruthlessness of Nascimento’s enemies keep the viewer tense throughout this breathless thriller. 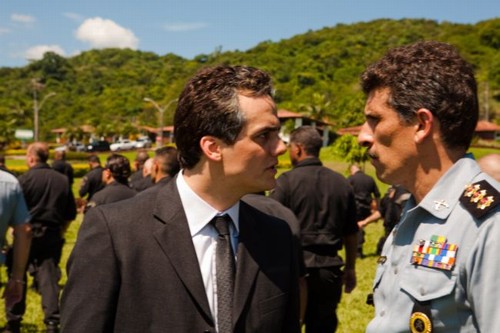 As well as frenetic pace, aided by hand-held cameras, this movie’s other main driver is its social commentary. A sub-title at the start notes that this work of fiction is very close to reality. At times it struggles to avoid portraying the gun as the answer to crime, but it has an intelligent edge that does not always show up for such huge-grossing projects. For the third film in a row, Padilha sets up against “the system” of the state.

Some may find Nascimento's voice-over intrusive and  unnecessary, but it helps to put together some of the quite complex streams that flow early on.

Winner of the Golden Bear in at the Berlin Film Festival in 2008, this gripping and gritty film is full of convincing acting that makes the viewer care about the outcome.

Extras:  the making-of documentary is superb, lasting nearly an hour, and delves deep into the pockets of the process to cover the characters, the ethos of the film, the camerawork, the practical side of filming and how the mock prison was constructed.