Russians doing Shakespeare? These windswept epics are better than some English versions I have seen…

My first reaction to these discs was, “Are they serious? How can you do Shakespeare in Russian?” It did not take long to see the value of Shakespeare-expert Gregori Kozintsev’s work.

These acclaimed versions are from 1964 and 1971, so they look dated, but both Hamlet and King Lear are set in very old times, so the monochrome presentation and often bleak landscape suit their mood.

It is the story of a king who suffers (in more than one sense of the word) from both pride and poor judgement, offering larger amounts of his kingdom to his children the more effusive their praise of him. His two eldest daughters, Leah and Goneril, gush their admiration and walk away with decent portions of land, but his youngest daughter Cordelia (Valentina Shendrikova) is honest and measured in declaring her love. Lear was ready to offer her the biggest share, but her restraint and refusal to flatter his pride make him wild and he rashly sends her away.

With the kingdom split and handed over to the next generation, he is stripped of his authority and power. The elder sisters are quick to take advantage, so that he is soon left to roam the land, homeless and with only the smallest retinue – his Fool and a few faithful servants.

It is here that Kozintsev’s epic scale is most expressive. Freed from the limitations of a stage, weather amplifies the mood – driving rainstorms draw out the depressing depth of Lear’s distress; a warm sun sets the mood for his reconciliation with Cordelia and the open moors accentuate his smallness and vulnerability to the elements of both weather and fate. The scale only distracts when the viewer suddenly discovers wild steppes that are supposed to be Cornwall or Dover.

The haunting score by Shostakovich accentuates the Russianness of the film, but the sub-titled text is very similar to my Penguin edition. It is abridged, but the visual impact of Kozintsev’s picture reduces the need for a full text. Plenty remains to keep purists happy in this powerful and emotionally engaging movie.

Hamlet, Kozintsev’s penultimate movie, is even more powerful. Radically abridging the text, he judges its pace to perfection, drawing the viewer forward with each scene, and decorates the film with exquisite cinematography. Sometimes, the viewer can sit back and simply enjoy his framing, composition and use of light.

Right at the start, he uses image and mood to set the scene. Before a single word is spoken, he has black flags 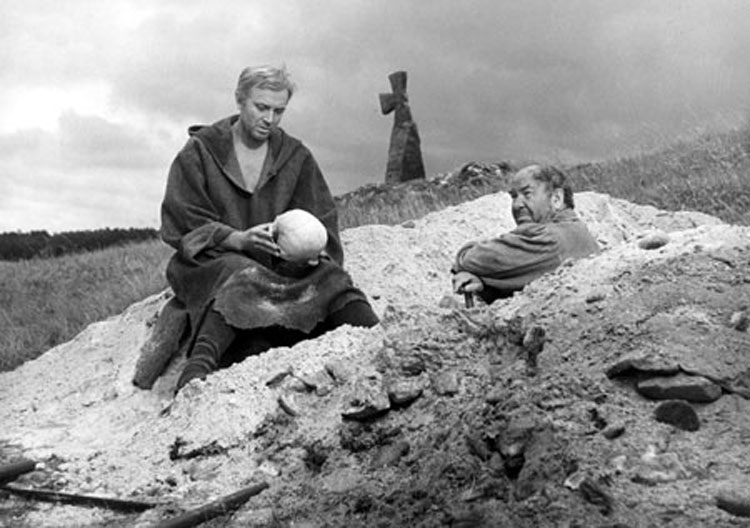 hung over castle walls, riders racing along horizons and castle officials clearly in a panic, all indicating a royal death and transition in the kingdom. Just for dramatic impact, he has crashing waves to accentuate the scale of the situation. The film gives the impression that Kozintsev may have been inspired by silent movies in the way that he conveys so much through visuals – and by the way that his King Claudius (Mikhail Nazvanov) looks like the archetypal villain from that genre.

The story hinges around Hamlet’s cousin Claudius murdering Hamlet’s father by pouring poison in his ear while he was sleeping and then marrying his widow (Elza Radzina) inside six weeks. This truth is only revealed when Hamlet sees his father’s ghost, depicted here as a wind-blown silhouette, who tells him what happened and charges him to avenge the death.

Although Kozintsev uses landscape and crashing waves to add power to the visual experience, it is rarely at the expense of good acting. A somewhat stylistic approach to several of Olivia’s scenes can be distracting, but Laurence Olivier, who directed and starred in the Oscar-winning 1948 production, reportedly crowned Innokenty Smoktunevsky's work here as the definitive screen performance of the lead role. His passion for justice has the audience on his side from the start.

Both works use all the means at Kozintsev’s disposal to make classic cinematic versions of these landmark Shakespearean plays.