This project will never be accused of being religious propaganda, and forget showing it to 2020's youth groups.  John Hughes (The Breakfast Club), Cameron Crowe (Almost Famous), move over.

If you followed Christian popular music in the '80's, you will feel right at home in this funny, loving, independent coming-of-age film currently making headlines on the festival circuit. If you were a Christian teenager in the '80's, you knew someone in a band like 316, the aspiring fictional hair metal group whose adventures during the summer of 1986 are told in Electric Jesus.

This project will never be accused of being religious propaganda, and forget showing it to 2020's youth groups.  Those who take this unvarnished memory lane trip with writer/director Chris White, Electric Jesus will find a tender, funny, honest exploration of evangelical youth culture--and its aftermath--best suited for sadder-but-wiser audiences.

John Hughes (The Breakfast Club), Cameron Crowe (Almost Famous), move over. Semi-autobiographical, loving nostalgic looks at one's gradual maturity have a new champion in writer/director Chris White, whose Electric Jesus quietly takes its place in a ground-breaking coming of age genre. Will its young cast enjoy the same career boost? Who knows, although casting The Breakfast Club and St. Elmo's Fire's Judd Nelson in one of the saner adult roles at least points the way to what is possible. 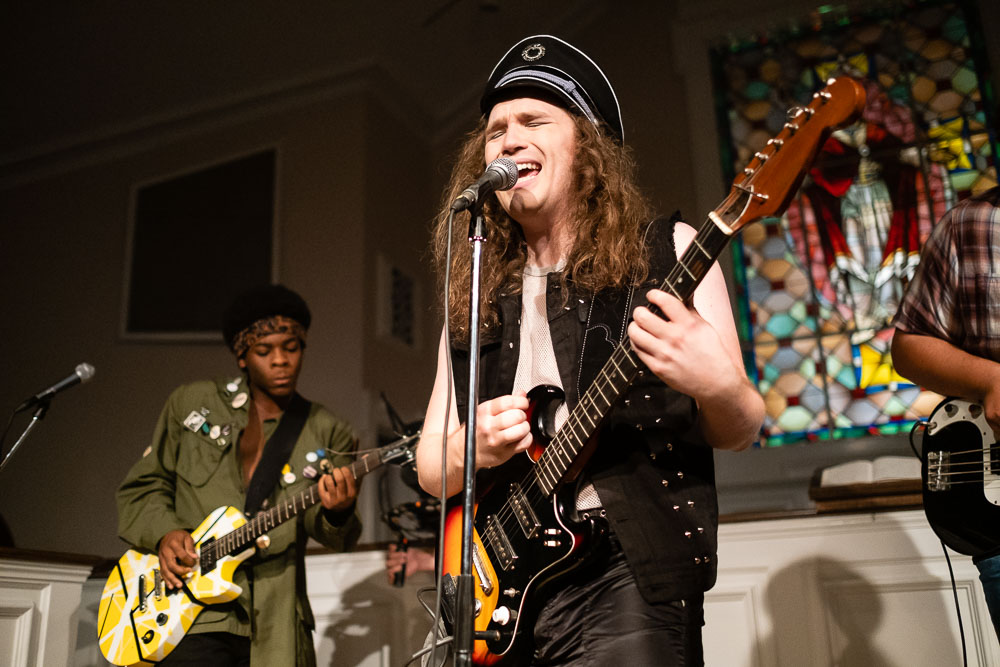 Aspiring band ambassadors 316--or is it Three Six Teens-- play in beautifully recreated venues: church sanctuaries, summer camp multipurpose rooms, roller rinks, and skanky bars filled with the same people who were there when you last visited.

"Christian" rock fans will find much to appreciate.  Electric Jesus is packed with nods to that scene. There are posters, cassettes, albums, T-shirts, pins, cameos, Easter eggs, and more authentically curated by CCM Historian John J. Thompson, who also supervised the film's music. The soundtrack features 80's Christian rock artists including the Seventy-Sevens, The Resurrection Band, Daniel Amos, and above all, Stryper, our aspiring rock stars role models. Daniel Smith (Danielson, The Daniel Familyre), turned original lyrics by Chris White into earworms so catchy you'll wish you had the album--which is currently in a Kickstarter fundraiser--so you could learn the lyrics. Spoiler alert: don't forget to do a dive deep into those original lyrics, one of many humorous nods to the naive earnestness of evangelical youth culture.

The film is tantalizingly hard to find as it builds buzz on the film festival circuit. Electric Jesus did very well at the Orlando Film Festival where it won “Best Picture,” “Best Director” (Chris White) and “Best Supporting Performance” (Brian Baumgartner), with plans for a wider theatrical release and eventual DVD in 2021.

But don't wait that long. Thanks to COVID-19, film festivals have moved online, making it possible to catch it as part of a festival's offerings. The production company does a good job keeping fans up-to-date on viewing opportunities through its newsletter and on Facebook.