Why did Sorrentino want to make this sumptuous series?  Shock, shame or serious story?

Few shows have made me ask as many questions as this one did before I had even seen an episode.

Jude Law plays Lenny Belardo, a young, American, orphan Pope in a series with the strapline, “His religion is rebellion.”

Is this another show that aims shock tactics at religion to get viewers in? Is it a Catholic-bashing series? Is it a fantasy drama, aiming to make a point? Or is it a serious drama about a man who happens to become Pontiff?

Catholic-bashing? Worldly politics is front of stage, and the plot is based on a premise that Lenny was only elected Pope so that older cardinals could manipulate him. He is in a running battle with his Secretary of State Voiello (Silvio Orlando). But Lenny is far more astute than they think him to be – and no doormat. But we also get nuns happily playing football in the gardens, acts of compassion, a culture of tackling corruption and a bishop risking his life to serve in gang-ruled Honduras.

If Sorrentino’s main purpose was to attack the Vatican, this series would not only have a much darker mood – he would have failed.

Making a point? There are other things to criticize the Vatican for. Images of the Pope smoking in the Vatican juxtapose addiction and opulence. Sorrentino does make us ask the question, “Would Jesus ever endorse such wealth at the heart of his Church?” and the answer is probably, “No.” But there is no one issue that he consistently points out during the ten episodes; Sorrentino merely reflects the culture of the Vatican, including its institutional failings, as background.

So maybe we are just left with a frequently irreverent “What if?” story, punctuated by gentle sub-plots, and Sorrentino’s sensual cinematography that lavishes sumptuous sunlight-rich outdoor settings across the series.

Ah, the series....  Apparently, it was originally to be a film, but then got extended. And it shows. 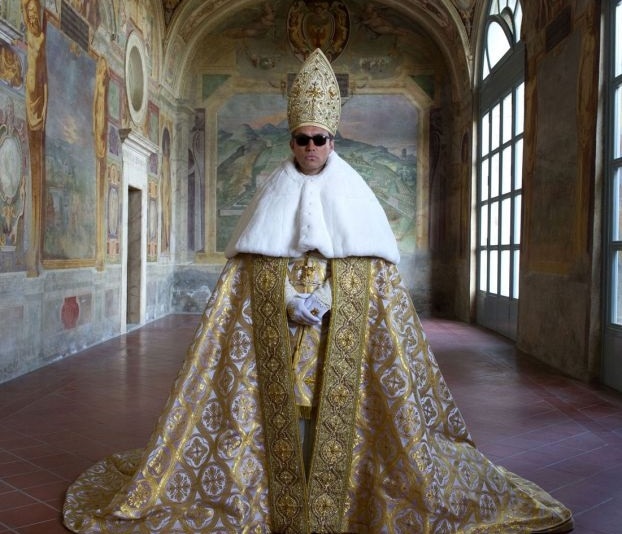 After the third episode, we are still baffled; is Lenny hero or villain? Does he or does he not believe? The blurb calls him, “shrewd and naive, ironical and pedantic, doubting and resolute.” He is almost more a mass of contradictions than a character. But mainly, the weakness early on is a lack of direction as the scene is set. Where a story normally sets the viewer a problem that they want to see resolved, with obstacles constantly put in the way of that resolution to keep the viewer hooked, this story begins without a clear problem to solve and a leading character that we find hard to identify with, because he is so unsure of who he is himself.

However, once it is on a roll and we start to feel that we understand him, we are drawn more into his mission to re-imagine the Catholic Church. In a bid to create mystery, he avoids being seem for the best part of a year; he wants a less popular, but more dedicated Church.

But while he tries to keep his integrity and wants to clear away issues (such as child abuse) that have damaged the Church, his changes are fundamentalist and prioritise dogma over reflecting Christ. So he wants all gay Cardinals out; in a power-play with the Italian Prime Minister, he demands zero tolerance on divorcees and women who have had abortions; and wants more tax revenue going to the Church.

As he plays brinkmanship politics with the Italian government, he risks lacking Christian compassion and succumbing to the attractions of power.

Lenny’s personal history in an orphanage surfaces throughout, and his carer, Sister Mary (Diane Keaton) remains his touchstone. Does this back-story help to explain his emotional turbulence?

The series takes on a pace for the last two episodes, as the story develops in both America and Africa, and Lenny’s character grows with it.

The Young Pope is that – a story about a young Pope. The Church is intrinsically a part of this, but the personal story is the focus. It is about the forces that shape him and how he responds. It is completely unconvincing at a basic level: such a character would never be Pope, with or without being manipulated. But – after the long-winded first three episodes – it settles down and becomes food for the mind and a feast for the eyes.

That said, there is one shock – no extras whatsoever. This really demands at least an interview with Sorrentino or a director’s commentary.