How a small community copes when tragedy happens and “Everybody’s got something to hide.”

It is no accident that Broadchurch has grabbed Britain’s attention and held it over a few years. There are plenty of reasons for its success, and here are three for starters.

The most up-front draw to the series must be its lead roles. David Tennant, who plays D.I. Alec Hardy, and Olivia Colman, who plays his local assistant D.S. Ellie Miller, are already British TV royalty. The detectives bear unimagined stress as they try to apprehend killers in two separate towns, and the actors only deepen their appeal here.

But the connection is also more personal than this. As the trilogy begins, we see Mark Latimer going to work, and he knows everyone he meets. This is a small town, with awkwardly close ties. When his son Danny is murdered, he has nowhere to hide his grief. The players in this story are ordinary people. A small issue with a relationship can spark off something that affects a whole town. It could be us, and we hold the Latimers in our hearts from start to finish.

But creating a shoal of red herrings, interweaving so many plot lines over a couple of series, and credibly drawing all this together with twists in where we invest our affections takes some writing.... as does the cast of characters, where, “everyone’s got something to hide.” Chris Chibnall (the new Dr. Who showrunner) has done a remarkable job. As the second series progresses, we see just how carefully he has plotted from the very beginning situations that tenacious lawyers will exploit for their own cause, as the court case for Danny’s killer flails the flesh from a decaying body of evidence that had seemed robustly healthy.

As much as the first series ended with a tang of disappointment that the reason for the murder felt slightly forced, the second series ended remarkably. A wonderful blend of justice and mercy, it may be one of the most Christian conclusions I have seen in any recent drama.

The unsuccessful murder case in Sandbrook, which clearly troubled Hardy in the first series, becomes the main story in the second; and while there are still repercussions from Danny’s murder rumbling on through the third series, its main case – the rape of a fifty-year-old woman at a party – gives a very different mood from the previous storylines.

Chibnall – whose great banter between the leads eases the emotional pressure – has a firm grip on writing characters, including clergy. Yes, vicar Paul Coates is a handy tool for his community links, but it is rare to have a writer with such an accurate grasp of how real vicars speak, act and feel, and how they offer people unconditional support. It indicates someone who generally notices how people relate and can reproduce it convincingly.

This show was re-worked for an American audience under the name Gracepoint, but apparently with far less chemistry and mood. If so, it may be that repeating the process lost the immediacy for the crew, who did not know the killer’s identity until very late on in this original.

TV drama rarely comes as tautly plotted, emotionally potent, credible and stylistically aware as this one, and it comes highly recommended. 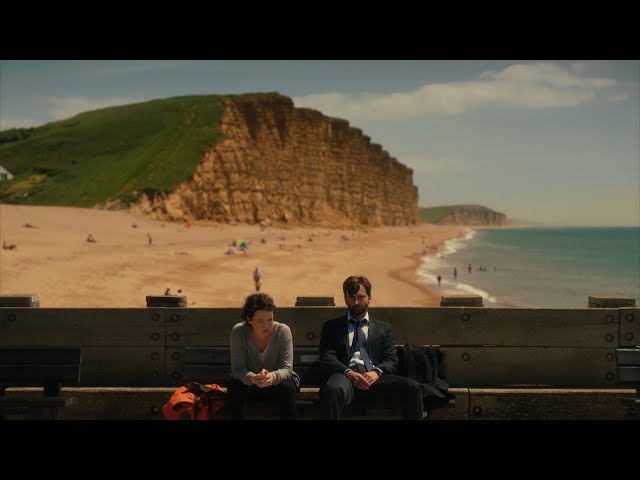 Bonus features. The bookending series include some forty minutes of background that gives a valuable sense of how the project developed for the cast from read-through. Chibnall’s inspiration for the show is one detail that comes out in an hour-long sequence of interviews with Series 2, which has plenty of enjoyable inter-cast banter, but too much repetition (you’re left in little doubt that the cast enjoyed working together, and it has some of those interview sequences where the opening and closing credits almost last as long as the brief content). Deleted scenes colour in the story, mainly the vicar’s romantic thread.