This beautifully animated work brushes with many questions about life, relationships and the value we place on individuals.

There are some beautiful ironies in this gorgeously animated film. Protagonist Michael Stone (David Thewlis) is a motivational speaker who sounds anything but motivated as his life lurches from existential angst to relationship crisis and back again. But the major irony is his urging the audience to “look for what is special about each individual, focus on that.”

The key to understanding this film (co-directed with stop-motion animator Duke Johnson) is its portrayal of the real disorder Fregoli Delusion, whose sufferers are convinced that everyone they meet is actually one single person in disguise – and usually someone close to them – sometimes with malicious intent. And if anyone has any doubt, the action largely takes place in the Fregoli Hotel (pronounced pretentiously by the receptionist as 'frais jolie') and Kaufman originally wrote the radio play script under the pseudonym Freddie Fregoli.

So it begins and ends with background chatter, every voice indistinguishable from the rest. Furthermore, apart from Stone, Tom Noonan voices every character – whether male or female – creating a sense of homogeny and greyness. The one exception is Stone’s admirer Lisa (Jennifer Jason Leigh). Stone notices that her voice is different from everyone else's; she is the anomaly (hence the title).

The story centres around Stone’s speaking visit to Cincinnati, a city that has guilty associations for him. After an accidental meeting, the two spend the night together. Via flashbacks and phone calls, we catch Stone’s past and the effect he has had on the people he has met.

But of course this is not a documentary about the delusion. That syndrome is merely a metaphor for how we can live our lives, considering everyone as equally unimportant apart from the ones who excite us (at the time). It is about really looking for the individuality in people and valuing them. The movie is made in a way that honours this, with great originality and intricate detail in the sets and figures. It feels disorientatingly human.

It is a tragedy that major studios are now run by marketing departments, rather than those who are artistically literate, as Sony turned this down, even though Charlie Kaufman wrote it. Stop-motion is a labour of love with phenomenal costs, but to have such a unique, thoughtful and touching piece of work makes it worth that price. The film had to be made independently and only just survived the crowd-funding process. 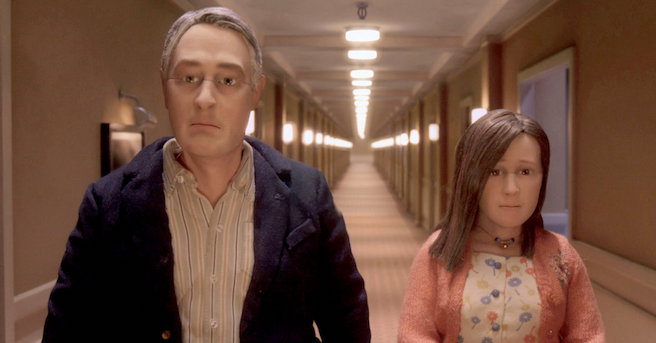 Bonus features look generous on the packaging, but the featurettes are really micro-features, many of them over-repeating the press quotes and awards given, so that you’ll very quickly get sick of them. The micro-shorts about how they made the cigarettes and Martini glasses are worth seeing, but the content is far too brief, given how special the production process was.

The best part (after a few initial pretentious audience questions) is a Q & A session with the producers and Kaufman. It gives some useful insight into the film, both its making and purpose.