Though not a perfect film, The Giver is certainly delivers one of the more thought provoking and intriguing themes of the year.

Though not a perfect film, The Giver is certainly delivers one of the more thought provoking and intriguing themes of the year. It is understandable why this has been such a popular and best selling book since its release in 1993. Author Lois Lowry pens a society that seems so inviting and peaceful but then shows what such an existence would ultimately cost.

In the film adaptation we find Jonas (Brenton Thwaites<http://youtu.be/e5GiYv3qslc?list=UUJlHz3BzuZfewVUvZMPTiOA>) graduating with his two best friends and finding out what job they have been assigned by the elders. They live in a community where all forms of anger, resentment, jealousy, or strife have been removed. They live at pease with the world around them. But they also are void of any true emotion. Feelings are encouraged to be discussed and shared but only at a superficial and text book level. They know what it means to value someone but nothing of love.

Jonas is chosen, as his position, to receive the highest possible task. To be the receiver of memories. To help preserve the community all memories have been removed. There is no reminder of war or the hatred and devastation that almost destroyed the planet. One man, The Giver (Jeff Bridges), has the ability to convey the memories to Jonas. Through intense sessions Jonas learns what it means to feel love, the pain of loss, the joy of new life and the agony of death. By learning he will be better able to help the elders lead the community in the future. But Jonas feels that everyone needs to know of these things to better live.

This is a sci-fi film and like most in the genre it has moments that lack clarity and plausibility. But at the same time the concept of the story is so intriguing. Would you be ok living in a perfect society if it meant going through it with no idea of love or pain. And would you miss what you never knew existed. The film is shot nicely and the decision to shoot the community in a very monotone almost black and white style was smart. Once Jonas starts to feel he sees color and the viewer gets another visual of how vivid life really is when we engage with it.

The acting is solid and there is a balance of action, drama and lighter moments. It is rated PG-13 for a mature thematic image and some sci-fi action/violence. Some of the imagery and visuals that Jonas experiences may be a bit intense for really young kids but the film as a whole is safe for the teenage crowd. I give it 3.5 out of 5 bike rides. Again not a perfect film but one that is fill of thought provoking questions and a moving message. 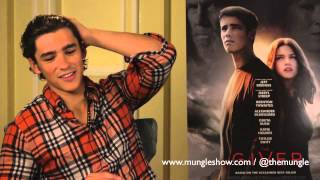