"When you put on a Muscle Shoals record, you felt something," says Candi Staton. You sure can feel it too on this excellent documentary, which is like jukebox playing commentaries on the soundtrack of our lives.

Think of great chart record producers and names like Phil Spector and Motown's Berry Gordy inevitably come to mind – or even the less soulful Stock, Aitken and Waterman. Each has created a sound of their own. Muscle Shoals's Rick Hall should be on that list. Muscle Shoals is a name that hangs around the back of the mind, often just associated with a studio, but the vast extent of their success – Hall's success – is probably missed by most.

While it is probably no surprise that the studio was behind songs like Percy Sledge's "When a Man Loves a Woman," The Staples Singers' "I'll Take You There," Aretha's "R-E-S-P-E-C-T" or even Dylan's "Gotta Serve Somebody," it might take a more dedicated muso to recognize the Rolling Stones' "Brown Sugar," Rod Stewart's Atlantic Crossing, Paul Simon's "Loves Me Like a Rock" or, more recently, The Black Keys' Brothers album as being made there.

This documentary makes the place unforgettable and does so in style. The topic is rich enough to carry the musical story and still leave you hungry for more. I suspect that as soon as Hall dies there will be studios racing to put out a biopic. Hall describes his early life: "No neighbors, no kids to play with; the floor on our house was dirt; the heater was made out of an old oil drum; we slep' on straw beds (made out of straw that we pulled up in the fields). We had no bathing facilities, no toilets, nothing. We just kinda grew up like animals." Even after that unpromising start, a further unfair amount of tragedy forced him to sink or swim – and swim he did.

Hall, and his house band The Swampers, tell the fascinating story of Muscle Shoals alongside lengthy memories and comments from Sir Mick Jagger, Keith Richards, Candi Staton, Percy Sledge, Steve Winwood, Alicia Keys and, of course, the ubiquitous Bono. We hear about how The Swampers left the studio to set up as rivals, with Hall feeling betrayed; and how Duane Allman pitched a tent outside the studio until he got to play sessions and then accidentally invented Southern Rock there.

At the same time as the studio was making musical history, it was making socially significant statements by its culture. Alabama Governor George Wallace was pushing segregation, but black and white artists were working together as friends at Muscle Shoals, with the only issue about race being the fun of having a white rhythm section that sounded as funky as a black one.

One of the most striking features from this reviewer's point of view is the amount of film of the early days. There were cameras around to capture Jagger and Richards during their recording stint, and early footage from a previous documentary shows a young Hall at the mixing desk.

Dogwoof have made some impressive documentaries so far, but this one is head and shoulders above most, not just because the story is gripping and touches many of our lives directly, but also because the cinematography far exceeds what is needed. Whether abstract close ups of recording equipment, a dramatically staged room set for Keith Richards (who shows exactly why Johnny Depp based Captain Jack Sparrow on his mannerisms) or artistically-shot landscapes of sunflower fields and a lone tractor, the visual aspect adds further to the joy of watching this movie.

The film only flags briefly, when introducing the theme of a native river spirit as a way of explaining the town's remarkable way with music. It feels a little forced and unnecessary.

There are some fine bonus features, particularly several extended interviews and an amicable reunion of Rick Hall and The Swampers. There are two commentaries. The director's commentary contains lots of "I love that shot," but the one with the Swampers is more informative.

This is a DVD that any music lover should investigate. It could be the documentary of the year. 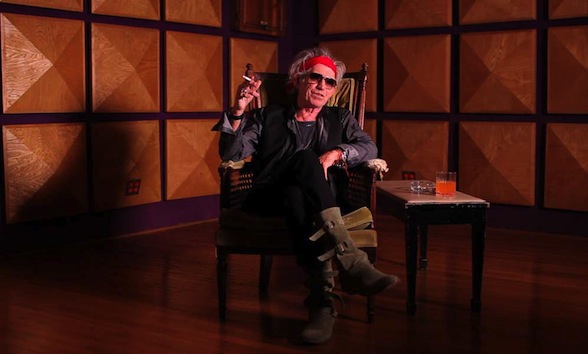