Twenty minutes is not a lot with such a prolific artist as Neal Morse, but it did solve some puzzles about his music and faith.

When you see a sold-out secular London venue filled by an ecstatic crowd, and the show is all about the old Christian allegory The Pilgrim’s Progress, you have to marvel at the reputation of a man who can draw them there and make the story so powerful.

But Neal Morse is no overnight success. The crowd has come to trust him, because of the quality he has produced since the mid ‘90s. As well as putting out consistently popular solo albums, he is part of two prog supergroups (Transatlantic and Flying Colors). But it began with Spock’s Beard, the band he co-formed with his brother Alan.

So was music in the genes?

“We were a musical family,” Morse assured me before the show. “There are sports families; we were a music family. There was so much music around: not just my Dad’s concerts, but my uncle was in a jazz vocal group called the High-lows, and all the music that was going on in the world at the time. Music was really at the forefront of the culture. It was wonderful.”

When I asked what made him go a step further and form a band, he exclaimed, “Oh, well!” as if to say, “Who wouldn’t?!” and dated it back to seeing the Beatles on the Ed Sullivan Show, adding, “There is a big difference between that and really doing it, so I tagged along. I saw some great bands early on and started writing music when I was in my early teens. I decided pretty early on, yeah, I was going to go for it.”

Because his brothers were older, they took him to gigs, such as Yes opening for Black Sabbath. That’s got to be pretty seminal for a twelve year old. So many other British bands caught his imagination, and he ended up playing keys for one English rock journeyman, Eric Burdon.

It was at this time that his journey to faith hit the accelerator, and the catalyst was his daughter Jayda being born with a hole in her heart. His wife had been praying for her healing at a church service and the hole in Jayda’s heart closed up. Morse was in Germany with Eric Burdon at the time and was reluctant to get his hopes up in case the heart proved not to have been healed after all.

But that was far from the only reason he came to faith. “Oh man, there were a lot of different landmark things over the course of about five years, slowly putting my toe in the water, going in ankle deep and then ultimately diving in. I didn’t just sort of walk into church, say, “Hallelujah, here’s my life.” Like Pilgrim’s Progress, it was a progression for me.”

He listed factors like experiencing the Holy Spirit; having a prayer answered about leaving the Eric Burdon Band, so he could be back at home with his kids; God’s provision; and feeling called at a church altar.

Ultimately, his conversion led to him leaving Spock’s Beard in 2002 and since then, his musical stature has grown even further.

Every band he is associated with seems to succeed. Although Flying Colors gets close, but without quite as much emotional punch, The Neal Morse Band strikes this reviewer as the culmination of his line-ups so far. The rest could be attempts to achieve what he now has.

“I don’t really think of it that way,” Morse responded. “I think of it as a bunch of really great bands and groups of musicians that I have been privileged to play with and to be friends with; co-labourers in the trenches. They’re all great in their own way and they’re all different.”

Bassist Randy George and drummer Mike Portnoy have been with Morse longer than anyone, and in more different line-ups. Portnoy, in particular, seems to have a complementary approach to creating the music. Perhaps given confidence by his reputation and popularity after years in Dream Theater, he comes across live as a co-leader in the band. But it is behind the scenes where his creative edge comes out. A bit like Troy Donockley, when he was in Iona, Portnoy is the odd one out in a band of Christians, but equally respected for his input. And he is a drummer who writes. 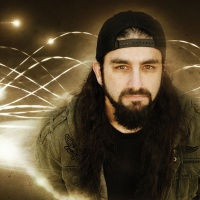 Morse enthused over Portnoy's part in the band.

“He’s very involved creatively and has an amazing mind for music – and everything, actually. He’s a big picture guy. I’m sure that’s why God put us together, because I’m really more of a just-music-and-lyrics guy, and Mike’s a big-picture guy: the whole production, the live thing. It’s hard to explain, but he takes a lot in and he thinks in a different way than I do, which is really helpful.”

The trickier side of complementary elements in a band is when they disagree. Morse spoke a bit about how sometimes writing is a flow and how sometimes (as with Sola Scriptura) it is as struggle. Similitude of a Dream was a “struggle between Mike and I about whether or not to have a second disc – Mike was really against it, it’s very well-known, and I wanted to explore it.”

The disagreement happened on a Monday night. Morse continued, “Because of that, I woke up and I wrote a lot of stuff I probably wouldn’t have written. I was thinking we would work on it in the studio together, but it was looking like that wasn’t going to happen and maybe I was going to have to try to put it together a little bit more on my own, to push the rock up the hill a little bit.

“Mike just came in on Tuesday with a totally different perspective. I feel, of course, from my point of view, that God came and brought healing to the whole situation. Once we resolved that, Kaboom! That was Tuesday at like one or two o’clock in the afternoon. By Thursday at seven, the album was done and it was like, ‘Boys, I think we’ve made the album of our careers!’”

Morse is such a role model for Christian professionals – work excellently, wear your faith proudly, and leave the rest to God – that I wondered whether he considers himself more a musician or a missionary?

“For me, a lot of it’s storytelling and testimonies,” he replied. “When I get to the end of Similitude and I start singing ‘Broken Sky,’ I think, ‘OK, now I’m testifying to you,’ which is a fancy way of saying, ‘I’m going to tell my story.’”

That story is so personal to him and it has come out in various ways. With Sola Scriptura, it was strident, but he has become more invitational lately.

“The great thing about music is it’s the language of the heart, so you can bypass the brain. That’s what we all love about it, I believe. There’s this heart thing that we can’t explain, just from notes being played and you just feel something. That’s what movie soundtracks are all about: the feeling, all this emotion, whatever it is – fear, love, all of it. I pray. I hope that people receive good from what we’re doing.”

Having reviewed a few Morse albums and made comments about how his earlier influences seemed to appear so clearly as if to be deliberate tributes or pastiches, I felt I owed it to him to check out what was accidental and what was deliberate.

Derek: “Author of confusion” on One: is the Gentle Giant vocal bit deliberate or accidental?
Neal (laughing): Well, the first Gentle Giant piece that I wrote was “Thoughts” on [Spock’s Beard’s] Beware of Darkness. I wasn’t sure if it was too Gentle Giant or not. I ran it by the band and they loved it and wanted to do it and then it became one of our signature pieces. So then, I thought, “Oh!” so I did “Gibberish” and I did “Thoughts, Pt, 2” and there were many different times when I was writing these. I grew up with that kind of thing, so I love writing it. I love trying to figure out the intricate little things and “Author of Confusion” is really just another one in a long line. To me, it’s really a classical or madrigal style of writing in rock music, which I just love. I think it’s great.

Derek: What about “Waterfall,” because to me, that is so like Genesis’  “Entangled” – is that deliberate?
Neal (Laughs again) Oh, yeah, yeah! Totally, totally! Yeah!
Derek: Do you sit down to write something that sounds like this, but is your own?
Neal: It isn’t deliberate in the beginning, I don’t think. A lot of times, you’re just writing something and you’re like, “It’s really nice.” The chorus of that came from one of Bill’s demos and I kind of plugged out this verse. Then, when it all came together, that’s when I realised how much it sounded like “Entangled”. Then, I even put the synth with the vibrato in. I thought, “I wonder if this is too far?” But generally, we’ll talk about it as a band. A lot of times, you wind up making things what you feel they want to be and let the references fly.

Derek: “Ways of a Fool” has two artist-referencing styles in it, starting with ELO and then alphabetically moving to ELP. Is that a clever idea??!
Neal: Bill had dabbled around in both of those sections. I didn’t know until later, when he told me. “The Balloon Song” is what we called it, and that had been in the wings for The Grand Experiment album and then we thought of it for the section in Similitude, but the ELP thing, he was just plunking around with something. I thought, “That’s great!” I took it down on my phone. Sometimes we have these bits and pieces and we sort of put them on a board and when we come up to a place, “Hmm, can we throw that in there?” We try it.

The full Director's Cut version of this interview is now on my blog. Part one is here.