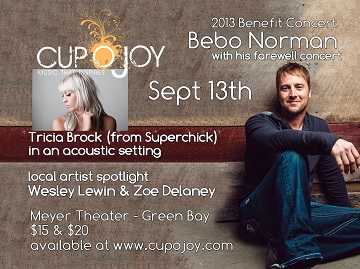 What could be more engaging and revealing than Bebo Norman's intimately confessional, exultantly worshipful pop folk at  the 24th annual benefit show for Green Bay's Cup O Joy concert coffeehouse? His vulnerable and wry asides between songs was what.

The show for which Norman played for the beneficiary venue's nearly quarter-century of bringing Christian music, comedy and movies to the upper tip of Wisconsin's Fox River Valley happened to be a date on his final tour as a cCm singer-songwriter. The rarity of an artist around the top of his commercial and critical game accepting, as Norman put it, "being called out of music" made for a fascinating view into the mindset of someone resisting what must be a palpable temptation to keep at a successful niche without the inspiration that birthed his position in that niche.

The artist who started fresh out of college in a year-long experiment of seeing whether he could make a living in music beat the odds and succeeded. But the wistful wish fulfillment of a twenty-something troubadour can become a millstone a couple of decades later when the realities of a wife and children in one's life abuts against the professional necessity of weeks at a time on the road.

And if he was being transparent as he sounded on the stage of the Meyer--one of those old-time, palatial downtown movie houses throughout the U.S. that's been restored to usability and grandeur after its architectural and design integrity had been compromised after it had become a multiplex before going into disrepair--Norman has no Plan B; hence his speaking toward the end his relatively brief headlining set of the Godly joy found in uncertainty as he relies on the Almighty for direction in discerning his next professional move.

Norman must have pleased the many in attendance who've followed him since his first album in 1999. He played two songs from that long-player in addition to radio biggies such as "Great Light of the World." In closing, he engaged in some deconstruction of the performer/audience concert relationship with a breakdown of just what bunkum the idea of encores is...before engaging in his encore! Before doing so, he waxed apologetic over the idea of songs chronicling the lot of singers' life on the road before breaking into his  thoughtful and poetic contribution that cannon, "Trees." The relevance and constitution of what an "old soul" is in the context of Christianny music, much less Christianity generally, as one of Norman's fellow road dogs referred to him as being and thus inspiring the song, eludes me some, however.

...which was the instrument every act on the bill had in common. By the time the Beebster hit the spotlight, the evening was wearing into strum overload. But there were highlights on the way to Norman's spot atop the marquee.

Tricia Brock, billed only by her surname on her debut solo album apart from feminine empowerment-ish, gown-up tween pop band Superchick, plied her thang with backing tracks comprised most of percussion as well as her husband playing...say it with me...acoustic guitar. The three songs from her latest album, especially "Daughter of the King," bear thematic resemblance to the pro-gal numbers of the group with which she got her start, though the newer material was motivated at least as much by her wanting to inspire her baby girl as encouraging an entire gender. Befitting her status as a fashion icon for a certain subset of young women, she sported a coif resembling partially-shave-headed  'do of popular electronic dance music DJ Skrillex (there's at least one blog of nothing but pictures of [un]intentional distaff appropriations of his locks' signature look) without revealing a bald pate. Yay for her on achieving that follicular feat, though I wonder as to the significance, be there any, of her flashy "Youth Gone Wild" T-shirt.

Two local singers, accompanied by you-know-what instrument, opened the night. Wesley Lewin can boast of already having a song in an indie movie about adoption (Beyond Acceptance)  and releasing at least one EP, playing his own six-string and a face so youthful in countenance it makes Hunter Hayes look like Walter Brennan at his most grizzled. His contribution to the program, "Heaven's Dress Code" may have a title that conjures the kind of funny ditty a Southern gospel quartet might ply during one of their comedic breaks. It is, instead, a serious praise & worship offering  with a metaphor that doesn't quite make sense.

Lewin has potential for the big time, but more satisfying by dint of her emotional nakedness was Zoë Delaney. "Inhale" takes its cues from one of her soul's dark nights and her comfort in Ezekiel 37's vision of dry bones coming to life. Accompaniment was stark as Delaney's catharsis, with an unnamed gent backing her up on The Instrument Which Shall No Longer Be Named.

Agreeably lighter in tone than La Zoë, one-time major Christian market label signee and Cup O Joy regular Jim Cole happened to be in the area for a relative's wedding. He took his last-minute turn at the mic' to poke fun at his renowned vocal resemblance to general market folk rocker James Taylor and sing two, reassuringly anthemic "Humble Yourself as a Child" (a bit reminiscent melodically to Taylor's "Shower The People"?) and the bluesy "Save My Soul." He joked, too, about how his famous sound-alike has the money  due him, but he looked comfortable in his skin and self-effacing about his veteran status.

No guessing what he played while he sang!