At BB King's in NYC, early-seaters were pushed right up to the stage, where budding guitarists could get a close-up look at Phil's technique and decide whether to be inspired or to give up playing completely. 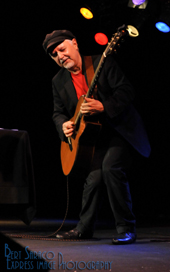 One of the go-to names when any guitarist of merit is asked about influences is B.B. King. Standing on the stage of the club named after the blues legend, Phil Keaggy asked, "does BB King ever play here?" A good question, since I can't really recall that happening recently. At any rate, Phil is somewhat of a legend himself, a fact that turns the innocent (?) question into a typically playful Keaggy moment. A personal one-off from one of the world's greatest and most respected players, meant to be shared as friendly banter. You know – just between us friends here in the heart of Times Square....

Keaggy appears to be the king of casual - even on such a prestigious stage - and apparently kept the set-list (if there was one) in his head, or at least open to change on the fly. Keaggy begins to go into "John The Revelator," and someone calls out for "Time." "Oh, you just want to hear the riff," says Keaggy, and proceeded to play the familiar, heavy run – only this time, singing the words of "The Revelator" in the new context. That's the kind of unexpected invention you can expect from a Phil Keaggy show. 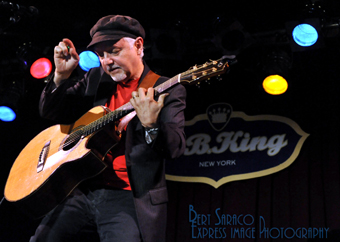 Fans of all kinds began to line up for the show two hours in advance of the starting time. BB King's is technically a club and can be configured as anything from a mosh pit to a tables-only venue. Tonight it was tables – early-seaters were pushed right up to the stage, where budding guitarists could get a close-up look at Phil's technique and decide whether to be inspired or to give up playing completely. 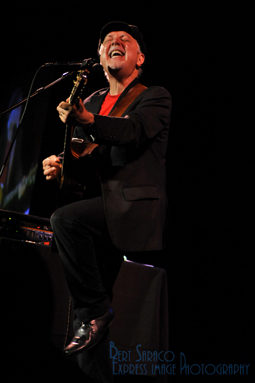 Sticking to one acoustic guitar and his bank of effects-pedals, shakers, finger-cymbals and – of course – the jam-master (used to create 'loops'- allowing Phil to create layers of sound in a live context), the guitarist filled the stage with music, performing songs from as early as the Glass Harp days ("Can You See Me") right up to new songs from his ever-growing catalog of solo projects. Between songs – or even in the middle – those with sharp ears might pick up well-known phrases from classic rock or surf tunes. One delightful diversion from Keaggy's own songbook was the cover of George Harrison's "Here Comes the Sun," with Phil reproducing the familiar tone of the beginning phrase exactly, and layering in four part harmony by singing the back-up parts to the jam-master via his guitar pick-up! 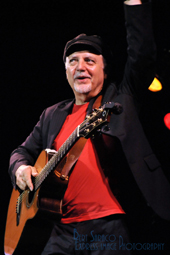 Those who came to hear Keaggy's pop/vocal songs were treated to "Love Broke Through," "What A Day," "Cherish the Moment," "Little Ones," "Strong Tower," and a plethora of classics. Fans of Phil's more instrumental side not only heard instrumental-heavy tunes like "Salvation Army Band," but breath-taking performances from the Acoustic Sketches project and – always a show-stopper – the instrumental tour-de-force, "Shades of Green."

To say at this point that Phil Keaggy is a national treasure would be an understatement. Those brought up on the melodic pop and classic rock of The Beatles, guitar enthusiasts, Jesus Movement survivors, and people who simply enjoy a fascinating and enjoyable live music experience owe it to themselves to see Phil Keaggy in concert at least once. Repeat as necessary.