Stryper in Concert at BB King's in NYC

Stryper played tight, robustly-performed versions of their songs, delivering exactly what the audience came to hear....

On a hot, soupy New York City night in July, the Yellow and Black did indeed attack, as Stryper – the undisputed masters of Christian-themed Pop Metal – took to the stage of BB King's club in the heart of Times Square 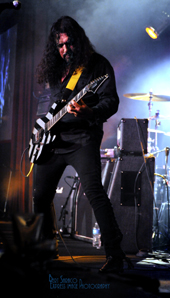 . Front-man Michael Sweet (who, unbelievably, has just turned fifty) looked fit, tan, and ready to rock, as did the rest of the band: Tim Gaines (bass, vocals), Oz Fox (guitar, vocals), and Robert Sweet (drums, visual timekeeper). This, the original Stryper line-up, showed no signs of wear for their 30 years in the business of creating crunchy, hooky metal. The stripes are still there although – thankfully – there was no spandex in sight.

The diversity of the crowd illustrated the wide-ranging influence of this band. A mix of fans spanning more than a couple of generations, there were aging metal-heads in vintage T-shirts, thirty-somethings that probably remembered hearing these guys on their parents record players, and twenty-somethings that were just curious. For every fist pumping the air there was a finger pointing toward heaven.

he faithful of all shapes, sizes, and ages (many of whom no-doubt can remember buying that first EP on colored vinyl) sang along, not just to "Sing Along Song," but to every song the band played. The expected rush from a Stryper concert lies really more in the familiar than the unexpected - tight, robustly-performed versions of the songs that everyone came to hear – and, with a few exceptions, that's exactly what the band delivered. 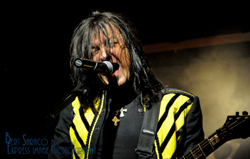 Tim Gaines' solid, reliable bass lines both anchored and drove the sound as needed; Robert Sweet, mostly hidden behind his kit and a small mountain of Marshall amps but for the occasional gloved hand and wisps of blond hair, played like a locomotive – always moving and creating his own brand of Metal thunder; Oz Fox – looking more and more like one of the Three Musketeers gone AWOL – is still a wild-man on guitar, making the instrument squeal, wail, and issue machine gun-like barrages of notes with every solo; Michael Sweet, no slouch on the guitar himself, is the master of ceremonies, the impassioned singer, front-man, and real communicator of the group. The audience is in the palm of Stryper's hand, and that hand is on the end on Michael's arm. 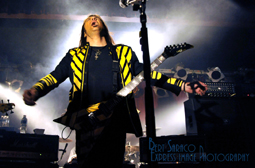 Before the show was over, Stryper had played the best-known songs from their past three decades of making accessible music – whether you call it hard-edged pop or soft-edged metal, it's music that sticks with you. The signature double guitar solos are still executed with precision and fire, the band still rocks relentlessly and, yes – Michael Sweet still hits the high notes. Chances are, if there was a song you wanted to hear that night, you heard it – all of this and at least one new song ( "Marching Into Battle") from the forthcoming project, No More Hell to Pay. 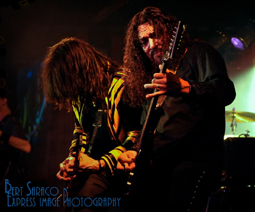 The passage of thirty years and the emergence of grind-core and death-metal might make Stryper appear less 'dangerous' than they seemed on The Yellow and Black Attack, but the truth is, they haven't mellowed or compromised. They still toss New Testaments into the crowd before the concert is over, the lyrics are still loud and clear concerning where they stand spiritually, and Michael still ends the show with a prayer – but a prayer that might be more sensitive and reflective than the one he would have closed with a few decades back.