Take 6 in Concert at The Blue Note NYC

Twenty-five years later, Take 6 is going strong at The Blue Note in NYC, with two shows a night for a week!

A quarter-century after the release of their self-titled debut, the group that put a cappella back on the map still draws enthusiastic audiences – enough to headline one of

the world's most famous jazz venues for a week of early and late shows. An hour before Tuesday night's second set would begin, a line was already forming outside of New York City's legendary jazz club, The Blue Note. As audience members filed out from the night's first performance, the response to the inevitable 'how were they?' usually took the form of a nod, a knowing smile, and a hand patting the heart ..they were Take 6 – they were amazing. And so they were..... 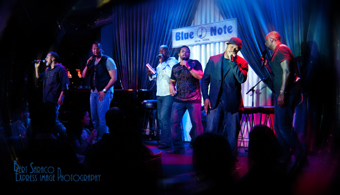 time already, and fits into this well-oiled music machine comfortably, contributing a hint of mischief, great energy, and an obvious love of performing in addition to impeccable vocal chops. The blend is as smooth as ever, with the various group members well able to soar over and slide under their designated vocal ranges to meet the demands of Mark Kibble's stunning arrangements. 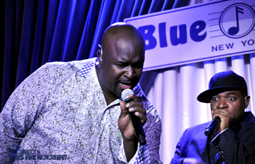 men simply standing in place producing those wonderful sounds would be enough – but Take 6 also entertains their audience with good doses of humor, good-natured interplay, one-upmanship and 'ribbing' amongst the members, and even limited choreography. The intimate venue allowed the band to connect effectively with the audience – especially the charismatic Dently, and Joey Kibble, who walked through the audience during "Family of Love."

The repertoire is wide enough to include a mix of spirituals ("Mary, Don't You Weep" capped off the first set), jazz standards ("Straighten Up and Fly Right"), pop tunes (the 'our influences' section included segments of "What A Fool Believes," "The Way You Make Me Feel," and other pop hits) and originals, including their own "Spread Love" and the tour-de-force "So Much to Say," which featured the group scatting and creating a frenzy of vocal percussion in the middle section. There were lyric-less moments of vocal 'horn section' work and, of course, Chea's astounding 'bass' supporting and warmly wrapping around the other five parts throughout the set.

Covering songs by such a wide range of artists (Michael Jackson, Stevie Wonder, Ray Charles, Earth, Wind and Fire, The Doobie Brothers) didn't get in the way of the group's overriding Christian message. Mark Kibble's stunning arrangement of Randall Thompson's "Alleluia" was respectful to the original, yet more soulful and viscerally worshipful, while "One," the title track of their most recent album, is as explicitly Christian as it is urban, hip, and hooky. Even performing themes from the world of film, there's an underlying sense of the spiritual: on Chaplain's "Smile" (with Dently accompanying with some very jazzy piano), one gets the sense that they're bringing a sense of The One that knows when your heart is breaking, and on "The Windmills of Your Mind," when they sing, "Like a circle in a spiral, Like a wheel within a wheel, Never ending or beginning, On an ever spinning reel," they just might be singing about more than just windmills. 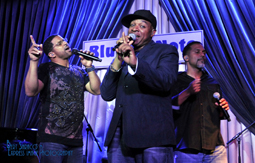 Delivering more than just great singing – and there was plenty of that – Take 6 uplifted, entertained, and even offered top-notch vocal impressions of every soul-pop icon from Prince to the Bee-Gees. Twenty-five years down the road (and reportedly visiting a NY recording studio in their off-time), Take 6 looks and sounds like there's plenty more that they have to offer.
We'll be waiting.