Danielson Famile and guests at the Knitting factory in Brooklyn, NY

Danielson Famile, Welcome Wagon,  and The Jeffrey Lewis and Peter Stampfel Band in Concert at The Knitting Factory in Brooklyn, NY. Aside from simply being a mouthful, this was quite an unusual concert line-up ...even for Williamsburg, Brooklyn. 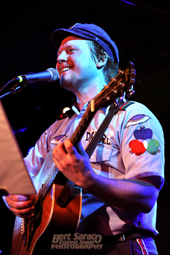 One group (Welcome Wagon) is fronted by a pastor-and-wife team singing Sufjan-pop style hymns and spiritual songs, another (The Jeffrey Lewis and Peter Stampfel Band) features a comic book artist / songwriter and a seventy-something psychedelic folk icon performing profanity-laced satirical indy-rock, and then there's Danielson Famile, who pretty-much defy description but certainly carry a spiritual message in songs that I like to describe as Dada-pop. A surprising assemblage of musicians, to be sure – but when Danielson Famile is headlining, surprises are expected...

Welcome Wagon opened the show, with producer/parishioner Sufjan Stevens unobtrusively lurking in the darker corners of The Knitting Factory, simply enjoying the music.

The Reverend Thomas Vito Aiuto and his diminutive wife Monique form the center of Welcome Wagon but were supported onstage by upright bass, trombone, drums, keyboard and a trio of back-up singers that one might guess were recruited right from the choir loft of the Resurrection Presbyterian Church, which is pastored by the Aiutos right there in Williamsburg. The songs are simple at their core, resting on the guitar-strumming pastor's basic technique and low-key vocals, with arrangements that reveal the unmistakable influence of Sufjan Stevens. 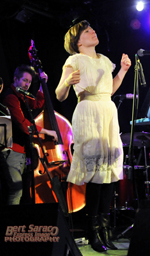 Rarely facing the audience directly, Pastor Aiuto played the role of subdued troubadour while his wife, Monique, lent vocal support as well as playing harmonica and toy glockenspiel – oh, and she danced – but she danced as if she was dancing in front of a Sunday School class, with an aw,shucks kind of joy that was infectious....

Nestled between the wholesomeness of Welcome Wagon and the child-like innocence of Danielson Famile was the somewhat cynical and edgy punk/folk/protest music of The Jeffrey Lewis and Peter Stampfel Band. With clever, if potentially offensive, lyrics and inventive songwriting, young poet/comic book creator/ musician Jeffrey Lewis presented a visual contrast with his partner, Peter Stampfel. Stampfel was making his mark with The Holy Modal Rounders and other eclectic folk/rock groups before Lewis was born, yet the iconic musician possessed an energy and enthusiasm that made up for the lack of polish of the admittedly under-rehearsed band. Lewis' lyrics are witty and entertaining and his music has a sense of fun about it, but the prominent use of certain obscenities and the use of some graphically sexual comic book imagery made the group a questionable fit. 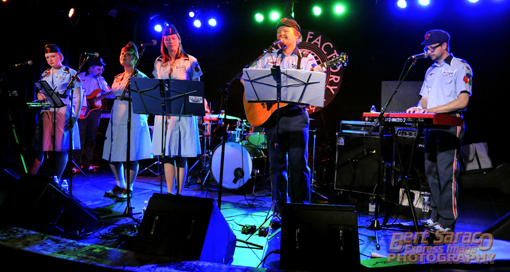 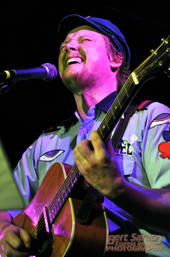 Danielson Famile (pronounced 'family') eventually took over the stage of the small venue, eight-strong, wearing their signature nurse's outfits and custom made patches – literally wearing their hearts on their sleeves to let the people know that they were there to bring healing and a little bit of fun (actually, the men look more like mail carriers and the girls look like they're in a WWII USO show) . The 'original' line-up was together on this tour - Daniel, Elin, Rachel, Megan, Chris, David, and Andrew, joined (on bass) by Josh Stamper – a fine group of musicians well-able to handle the intricacies of this unique music. 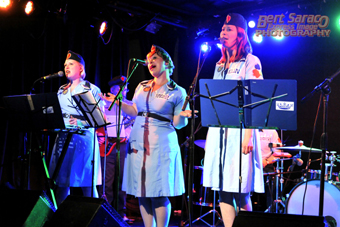 The songs – which sound, on first listen, like a nine year old having fun with his first guitar – are complex enough to make good use of the two drummers on-stage, and explode with passion and spiritual light. Daniel Smith's lyrics seem to come straight from the heart and mind of a child and have a way of making us feel like we can inhabit their energy and relate on an emotional level. Delivered in Smith's unique high-pitched style, the words and melodies somehow to make sense, even in a song like the crowd-pleasing "Did I Step On Your Trumpet," which not only asks the musical question stated by the title but includes lines from the spiritual, "All My Trials." The band played a variety of Danielson Famile favorites including "This Day is a Loaf," "Complimentary Dismemberment Insurance," and "But I Don't Want to Sing About Guitars," from the recent Best of Gloucester County album. The night's music ended with Danielson's tribute to the audience – a 'thank you' song that builds to a thunderous big-movie score ending.

And I think he means it.