Warmth and love for a cold, cold world.

One day before Valentine's Day, Fiction Family (along with a variety of musical performers, speakers and poets) was already spreading the love as part of the Heavy and Light tour – a traveling event designed to 'present hope for people struggling with addiction, depression, self injury, and thoughts of suicide. Irving Plaza hosted the New York City stop, offering a little warmth in the middle of a typically wintery February.

Under the auspices of the

interfaith non-profit organization called To Write Love On Her Arm, Fiction Family headlined a concert that featured an under-card of East Coast artists, not the least of which was Brooklyn's own up-and-coming The Lone Bellow. Still, it was Switchfoot's Jon Foreman and Nickel Creek's Sean Watkins that we at least, came to hear – and even though the crowd was enthusiastic during the sets by all of the opening acts, the excitement kicked up a notch when Foreman took to the stage.

With just an acoustic guitar in hand and harmonica holder around his neck, Foreman did a few 'songs of hope,' occasionally going completely off-mike to communicate more intimately with the audience. Ending "Dare You to Move" as a sing-along, Foreman then gestured toward the stage set, which included couches, chairs, and at least one end-table lamp, and basically invited us to become part of his 'fictional family' and step into his living room.

From the country-fun of "Just Rob Me" to the personally-revealing "Damaged," Fiction Family played as diverse a set as a group with only two albums could. Without question, Jon Foreman (vocals, guitar), Sean Watkins (vocals, guitar), Tyler Chester (bass, background vocals), and Aaron Redfield (drums) enjoy playing together – side-project status seems to give this band a pleasantly-loose, relaxed attitude. Make no mistake, though – Fiction Family can rock, and rock hard. If you need evidence, there's the hard-rocking "Give Me Back My Girl," which, well ...rocked.

Far from the typical posturing and histrionics of most rock performers, Foreman and Watkins simply step up and do their songs and do them well. They let the songs strut their stuff. Less sedate is Redfield on drums, who produces a thunderous barrage when called for, and – to a lesser extent – Tyler Chester, whose conservative, functional bass occasionally took off for unexpectedly stunning solos.

The surprising finale – David Bowie's "Heroes" - had Fiction Family joined by most of the night's performers, with The Lone Bellow's Zach Williams holding a lyric sheet and sharing the mike with Foreman. The night's entertainment ended up being served family-style. And that's not fiction. 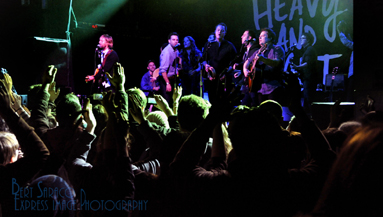