A bit strange for a Christmassy concert, this.

Jeromy and Jennifer Deibler, the married couple who effectively now are FFH-short for Far From Home, in case you're new to one of the more consistent hitmaking acts on certain contempo' Christian radio formats over the past 14 years-weren't actively promoting a new album. This show at the space I've grown to call The God Mall (Elmbrook Church is Wisconsin's biggest mega-church, and that's all I'm going to say about that now) was held a wood-heavy, still sizable side room comprising a quarter, at most, of its main sanctuary. It was scheduled to start at an early 5 PM, so as to give the place's usual congregants time enough to get home to watch-say it with me, fellow Wisconsinites-the Packers game that night. Tickets were priced at the unusual denomination of $11.80. And the radio station rep' who greeted me and my friend who drove us greeted us immediately upon our entrance as well as suggesting we purchase significantly discounted sweaters emblazoned with his employer's logo for holiday presents to our loved ones, none-to-few of whom listen to the signal of said rep's employer, much less the two of us to whom he was giving his spiel.

Money changing in the temple aside  (I kid...kind of), the date in support of Lifesong for Orphans, a ministry benefiting children in several countries, remained mostly low key. The Deiblers four-piece band, five counting Jeromy on his own guitar, hewed toward the acoustic side of their sonic spectrum. Jer' really need not have apologized for the occasional use of banjo, though, yes, it sounded as if he were kidding. 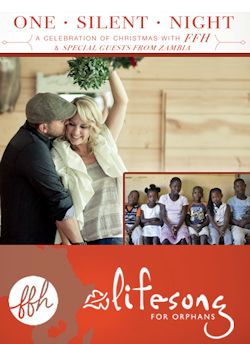 Perhaps not as peculiar for a concert celebrating the Incarnation was that it wasn't entirely comprised of tunes related to it. They opened, in fact, with "One of These Days" and another of their signature cCm FM hits before getting into the more seasonally festive fare. Though their remakes of standards were fine, arguably the best of the bunch was "One Silent Night," the titular tune of their own Yuletide long player from a few years ago. Because Jer' and Jen' are husband and wife, I'll give them slack enough to not kvetch over the inclusion of "Baby, It's Cold Outside," really more of a winter, rather than strictly Christmas, number, but what the hey, they accomplished the tune's coy/lecherous combination better than should be expected from two people in an ostensibly Christian setting and for for whom  coyness and lechery should be moot points.

A weirder manifestation of wintery musical sentimentality came from the Zambian children choir comprised of beneficiaries of Lifesong for Orphans, who took the stage for a a handful of numbers. The weirdest? "Walking in a Winter Wonderland," where the six assembled teens and tweens, from a locale where frozen precipitation must be rarer than the proverbial hens' teeth, singing of imagining a snowman to be a parson who could marry them to their respective beloveds, was especially bizarre. The kids' rendition of "O Come O Come Emmanuel," accompanied by beats from a drum from their homeland, made much more contextual and aesthetic sense. Ditto for a number the Deiblers sung with the young'uns in their native language abetted by another indigenous percussion instrument.

Jeromy promised that his mid-set pitch for Lifesong wouldn't be manipulative, and compared to other such similar pleas at other Christianny concerts, I suppose it wasn't. Adding legitimacy and a sense of homeyness to the the charity's image was the announcement that Lifesong's founder, a retired businessman, and his wife were driving the kids chorus in a vehicle separate from FFH's tour bus. Jeromy announced the couple's presence at the gig, sitting in the balcony and much to their apparent embarrassment, or so said Jeromy.

The band wrapped up with a few more numbers after the funding request, among them "As For Me" from their forthcoming  praise & worship album and what Mr. Deibler deemed the song for which they get the most requests and harder core afficionados than I nigh demand, "Big Fish." It was my recollection that the latter in its original run charting on the same station where I listen to Breakpoint commentaries and Unshackled as being only a few rungs lower on my personal annoyance scale than Chris Rice's dumb ditty about various cartoon personages becoming Christian. But, singing along with the "dum da dee"'s and hearing the retelling of Jonah's plight in person, 'tis indeed a far sight more tolerable than hearing an impersonation of Scooby Doo, et al mangling "Hallelujah!" Oh, and somewhere during the the proceedings, Jeromy told of how the floods afflicting Tennessee a couple years ago wreaked havoc on their house and  brought his and Jennifer's son and daughter to the platform. Mom, by the way, was mum for the night, save for that "Cold Outside" duet, lead vocals on another song and background singing on most every other.

Technically, my friend noted that the Deiblers' vocals could have stood to have been higher in the mix. That complements my observation of how the drums should have been less prominent. Otherwise, FFH's presence made for pleasant, mainstream adult. slightly folksy Christo-pop to benefit a worthy cause...and all in time for locals to get back watch The Green and Gold on Lambeau Field.