Cooking up a delicious repast for prog-hungry New Yorkers.

The venue is just around the corner from the famous Chelsea Market, but the cornucopia of culinary treats at that famed food emporium couldn't compare to the hot savory licks and tasty sounds that Neal Morse and his new band cooked up for the prog-hungry sold-out crowd at New York's Highline Ballroom.

Randy George (Bass) and Mike Portnoy (drums, back-up vocals, and manic rock & roll histrionics) along with a trio of newly-discovered musicians who emerged as the cream of the crop through an audition process that began with submitted videos and ended with live try outs: Eric Gillette on keyboards and guitar, Bill Hubauer on keyboards, violin and sax, and Adson Sodré on lead guitar. As unusual as that method might seem it was nevertheless successful, as this six-piece band proved not only capable of handling music from a wide range of Morse's catalog from a technical standpoint, but played with passion and a sense of truly being a unit and not just hired players.

The Highline Ballroom is a good-sized venue but feels intimate – the format is tables and chairs on the sides of and in front of a roomy stage with good lighting and excellent sound. Big enough to generate big-crowd energy but small enough for Neal to connect with people in the balcony area, this seems to be the perfect venue for a band intent on connecting with not just the audience's body and soul but trying to reach the spirit as well. Certainly, Morse and his band felt The Spirit, with Morse visibly touched by what was happening several times through the performance.

It should be pointed out here that Morse makes no apologies about his faith, and it's a vital aspect of his music. The crowd, very much a mix of those who already 'believed' and those who only believed they would hear some great music, was united by the powerful sweep of the songs, the intricate melodies, and the virtuosity of the musicians – that the assembled crowd all sang along to the faith-affirming words is an interesting phenomenon to say the least, and certainly deeply affected the band as well as this reviewer more than once. 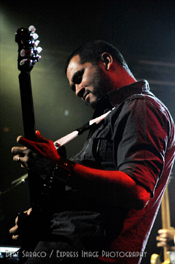 Morse switched with ease from keyboard to guitar and back, favoring the keys and letting Adson Sodré display his dazzling fretboard technique on most of the solos. Eric Gillette's keyboard work filled in the textural gaps and took over perfectly when Neal switched to guitar. Bill Hubauer proved a formidable triple-threat, providing solid synth work and showing considerable chops on the sax and violin. Of course, Portnoy is a show all by himself, navigating the drum kit like a master, 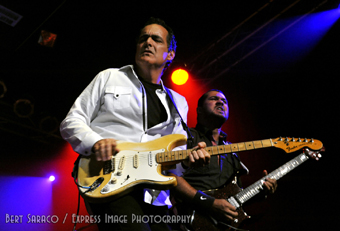 sometimes standing, almost orchestrating the crowd, and having a great time powering the group through the night. Of course, solid and steady under it all, is the powerful bass playing of Randy George.

One of the criticisms of much prog rock is the tendency to be cold and over-technical, but Morse and his band have passion to spare and infuse the music, which might otherwise run the risk of being overpowering in its complexity, with heart and a sense of wonder. In many ways you get the best of both worlds.... 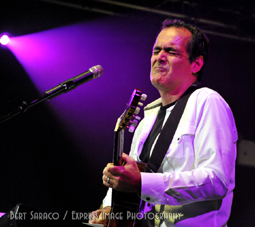 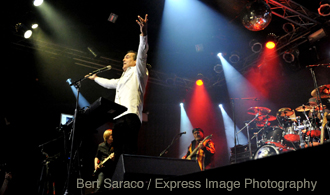