This is what musical performance is supposed to be: unpredictable, inspired, dynamic...... 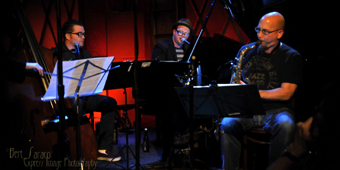 Charlie Peacock is  certainly not predictable. On his all-too-rare visits to the New York area, I've seen Charlie as a pop star, an indie-artist, and jazz man (headlining at The Jazz Standard). Now Peacock is at last back on the road premiering music from his new solo album, No Man's Land - a personal odyssey and an introspective mix of Americana and Peacock-flavored pop.

The intimate venue in New York's funky lower east side is known for excellent sound and its distinctively retro red and black stage set. Amazingly, there was a real acoustic grand piano (that wasn't there the week before) on the tiny stage. A glance upward revealed the secret: the piano is usually nestled in a piano-sized nook above the back of the stage and is hoisted up or down when needed. Good news – Charlie gets a real piano! Bad news – it's gonna' be really hard to see him. Given the more organic feel of No Man's Land, though, this is just what Dr. Peacock ordered, and the results were typically unique and delightfully real.

The show began and, to the surprise of many, there were just three men on stage: Charlie, his son Sam Ashworth (acoustic guitar and harmony vocals), and the legendary sax man and collaborator with Peacock on his two instrumental jazz projects, Jeff Coffin. An acoustic guitar, piano and sax trio is not exactly what you'd expect from an artist that's been so closely associated with pop music and (lately) electric jazz, but Charlie's new arrangements of classics like "Big Man's Hat" and "In The Light," along with his newer material, like "Death Trap" and "Only You Can," took on a new energy presented in this fresh, live context by three master musicians. Sam's vocals perfectly complimented those of his father, Coffin's sax absolutely talks, bubbles, wails and paints incredible sound pictures, and Charlie, his hat and horn-rims just barely visible behind the piano, delivered his distinctive vocals and played tasteful licks worthy of any small jazz club. 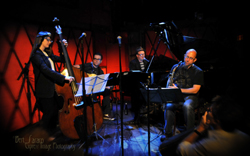 The trio played with enough funk and soul to make you not take notice that there was no percussionist on stage. Shortly into the show, Charlie began to add some of his New York friends into the mix, the first of which was Kate Davis, who joined in on several songs playing upright acoustic bass, adding some melodic bottom-end to the sound. After Davis made her exit (with appreciative applause from the very impressed crowd), the charismatic, animated Zach Williams joined the band onstage, flanked by Brian Elmquist and Kenyon Adams. The three men were there as back-up vocalists but sang with such energy and love of performance that the term 'back-up singer' is inadequate.


It's hard to say who was enjoying who more: Coffin was visibly entertained by the energy of Zach, Brian, and Kenyon who, in turn, seemed to be physically overcome by Coffin's amazing improvisations. By this time the show transcended itself and became an event. This is what musical performance is supposed to be: unpredictable, inspired, dynamic......

Charlie Peacock and friends turned an album release tour into a communal experience. It's about life, and that also happens to be what No Man's Land is about. And that's what live music is about, too. 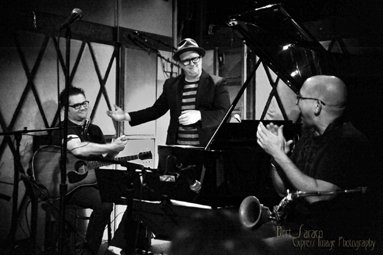