Welcome back to our shores, Iona. First-timers and long time fans are in for a treat. 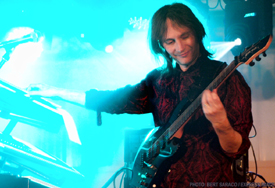 After being away from our shores for too long, Iona, the Celtic prog band (for lack of a better term), began its current American tour in New England on an almost-perfect June night. For some two and a-half hours, a gymnasium in Massachusetts became (like the island that gives the band its name) a place where "the veil between the earthly and heavenly realms seemed to be particularly thin." Drawing from songs that went back as far as the band's earliest recordings and right up to the amazing current project (the stunning double-disc set, Another Realm), the room became an island – a spiritual and musical oasis – bringing audience members to a place of refreshment, celebration and renewal. 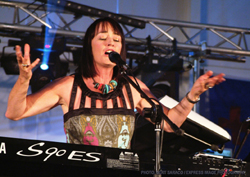 Their music has a transporting quality and, for this first-timer, was an aural delight; full of soaring, majestic sound supporting deeply spiritual lyrics delivered from center-stage by the pristine vocals of Joanne Hogg. Attendees came from a varied demographic: people that had no idea of what to expect, long time fans of Iona, fans of prog, fans of the sub-genre of 'Christian music' and some that had no idea that there even was such a genre. As Neal Morse played over the PA system, musical discussions ranged from Phil Keaggy to Frank Zappa. There was 'an atmosphere of miracles' that united us all - even before the band performed the song of the same name....

Earlier that day, Dave Bainbridge walked back and forth between keyboard set-ups trying to make sure that the right sounds would be in place for that night's concert. 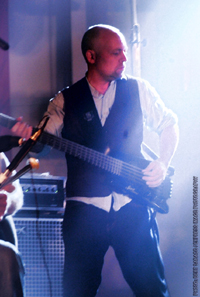 "The people we hired the equipment from sent the wrong keyboard." Bainbridge's tone of voice was a combination of apology and explanation for not being able to give us his full attention. Most people would be ranting about the apparent foul-up with the delivery of the wrong instrument, but Bainbridge was the picture of grace under pressure – a phrase coined by Hemingway to define 'guts.' Iona would perform tonight with untested equipment, on their first jet-lagged night back in the United States from their native UK, and with a drummer who barely made it into the country due to some paperwork issues. Some people might say that takes guts. Others might say it takes grace. Iona has both – and both were on display throughout the concert. 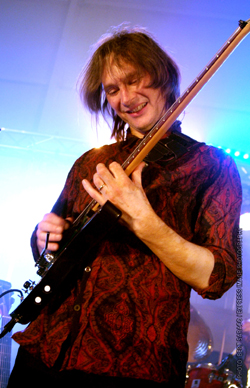 Bainbridge, on the right-hand side of the stage, stays busy with his rack of keyboards and guitars – sometimes seeming to momentarily have one hand on keys and the other on his fretboard. The smile almost never leaves his face, except for when he's lost in one of his exhilarating, soaring solos. Joanne Hogg is the voice of the band, as singer and host. Switching between keyboard, guitar, and percussion, her precise vocals shimmer with emotion. Enjoying the music as much as any member of the audience, Hogg frequently breaks into a spontaneous, uninhibited dance – not the kind that says, 'look at me,' but the kind that you do when you don't care whether people are watching or not, because it comes from inside. 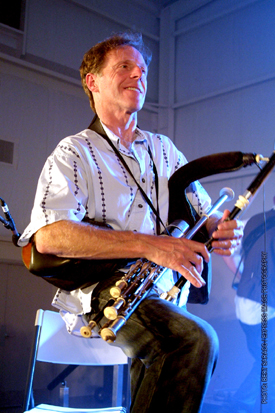 On low whistles, tin whistles, vocals, and (especially) uilleann pipes, Martin Nolan is a central part of Iona's musical signature, whether soloing or playing in amazing precision in tandem with Bainbridge's guitar. Nolan, on the opposite end of the stage from Bainbridge, has a dry sense of Irish wit that's as sharp as his playing. When it becomes obvious that many of the night's most popular songs are on albums that the band did not have at the merch table, Nolan pointed out that God has promised to provide, 'but we like to make it hard for Him....'

Phil Barker's bass playing is sturdy and melodic, often emerging through the wash of sound to drive the point home. Getting deeper into the music as the night went on, Barker marked out his own little dance-floor space while he played, lost in the moment yet always right where he needed to be. 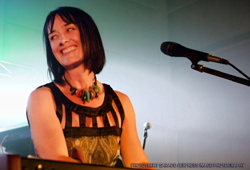 And in the back, where they can always be found, the drummer: Frank Van Essen's unique approach to playing creates great swells of percussion. The music sometimes seems to ride the wave of Van Essen's strong, passionate playing, which is approached in a more melodic sense than that of most drummers. Twice in the concert, van Essen left the sticks to play the violin, which he did with that same passion and with beautiful tone and control. 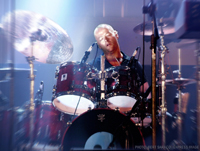 Before the night was through there would be dancing on stage and in the audience, precision playing, ecstatic improvisation – or 'spontaneous combustion,' as Nolan called it – and many a transcendent moment. 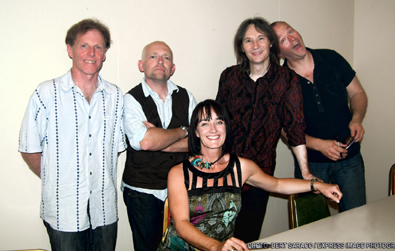