Christine Vaindirlis at Drom in NYC

For about an hour and ten minutes Christine Vaindirlis and her powerful five-piece band  brought a little bit of South Africa to New York, right in the shadow of Tompkins Square Park 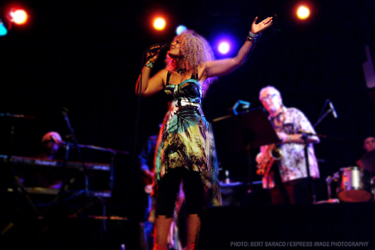 The colorful environs of New York City's East Village became a bit more colorful – and a lot more exciting – as London-born, Johannesburg-raised, Brooklyn resident Christine Vaindirlis took to the stage of the musically-adventurous club Drom. For about an hour and ten minutes Vaindirlis brought a little bit of South Africa to New York, right in the shadow of Tompkins Square Park. Spiced with some solid jazz, a good dose of funk, and backed up by a top-notch five piece band, Vaindirlis performed songs from her excellent debut album, Dance Mama, as well as some well-received new material. 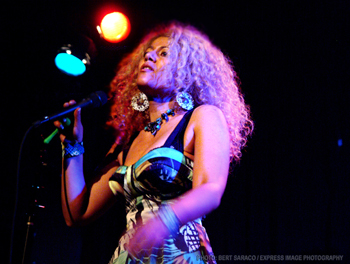 Supported by ATN Stadwijk on keyboard and back-up vocals, John Cabán on guitar, Michael Olatuja on bass, Mauricio Zottarelli on drums and, Morris Goldberg (from Cape Town, South Africa) on sax and penny whistle, the energy flowed from the opening number "No More Drama" until the last notes of Miriam Makeba's "Pata Pata" faded away. In between was a celebration that had the crowd clapping and occasionally dancing along. 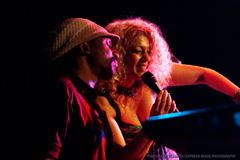 Christine's vocals are strong, have a wide range, and are matched ably by the talented band members. Notable moments were Stadwijk's keyboard solo on "Fighting or Surviving" and Goldberg's flute solo on "Down by the River," with articulate support from Cabán on guitar and Olatuja and Zottarelli providing a solid rhythmic foundation from bass and drums through the whole show.

The party atmosphere was not only boosted by a birthday celebration, complete with cake,  but by the addition of two young ladies that came onstage about two-thirds of the way into the show to add back-up vocals and more than a little 'pata-pata' of their own.

Included in the performance was a new song by Christine, inspired by the tsunami that so devastated Japan last year. Like all of her music, "We Are One," is heartfelt and passionate – like the artist herself. The music is a celebration of life, with a spiritually-infused joy and infectiousness. Despite the seriousness of that new song, the well-paced show soon got back to being a celebration of that special hybrid of zydeco, Marabi, world-folk, funk, traditional South African music, pop and jazz that makes Christine Vaindirlis' sound special. Visit www.christinevaindirlis.com and check it out for yourself. 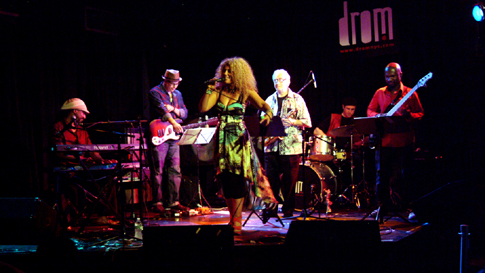