Burlap to Cashmere in concert at The Bitter End in NYC

A triumphant return to The Bitter End for Burlap to Cashmere. definitely looking towrd the future and not simply 'homeward bound'..... 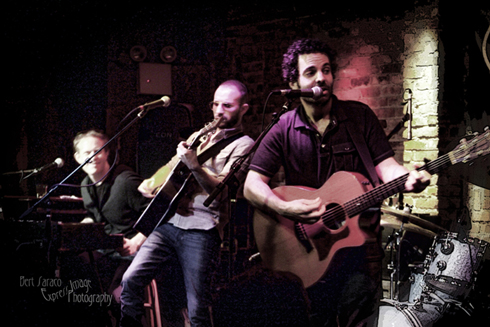 A little over a dozen years ago Burlap to Cashmere released Live at the Bitter End, a surprisingly out-of-the-box offering that received as much critical acclaim from the press as it did raised eyebrows from the all-too-comfortable Christian mainstream. Instead of simplistic platitudes and standard-issue Nashville sounds, Burlap to Cashmere delivered poetic, insightful lyrics and earthy Mediterranean/flamenco/folk-rock with hints of Django in the guitar work and shades of Cat Stevens and Simon and Garfunkel in the vocals. Despite the amount of water that's passed under the bridge, Burlap is back and sounding stronger and more mature than ever.

There was a lot of warmth in The Bitter End, and it wasn't just from the pleasant end of May New York City weather. The club was packed not only with fans and walk-ins, but family members (including front-man Steve Delopoulos' mother) and friends - like guitarist John Philippidis' high school music teacher. The rest of the heat was provided onstage by this five-man version of Burlap to Cashmere. Along with Steve and John were long-time drummer Theodore Pagano, Chris Anderson on acoustic and electric bass, and Crosby, Stills, and Nash keyboard man Todd Caldwell on electric keys and the club's own acoustic piano.

Opening quietly with "Love Reclaims the Atmosphere," Steven and John momentarily channeled a couple of guys named Paul and Art, who graced the same stage in 1964. Later in the show the two would do a more overt tribute, performing "Homeward Bound." Immediately following the opening duet the atmosphere of the famous New York club was reclaimed by Burlap to Cashmere full strength – the furious acoustic rhythm attack from Delopoulos, the stunning guitar bursts and runs from Philippidis, the strong, capable bass work from Anderson, Caldwell's classic rock era organ sound and, under it all, the steady foundation laid down by Pagano's drum kit. 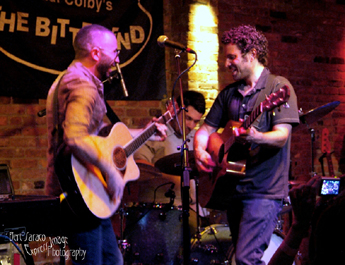 The band moves effortlessly from a whisper to a shout, with songs like "Don't Forget to Write" flowing into the fury of the rhythmically punctuated "Build a Wall." Throughout the show there are moments of almost startlingly-perfect three and four part harmony (Pagano seems to be the only performer without a vocal mike). The synchronicity between Delopoulos and Philippidis is not just mesmerizing to watch, but perhaps defines the band's on-stage persona. Delopoulos, a gentle, artistic soul with fire inside plays off the more visceral Philippidis, whose passion fairly contorts his body as he coaxes fiery salvos of sound from his guitar seemingly against its will, still managing to produce vocal harmonies perfectly matched to the timbre and phrasing of his musical partner.

This is a band that works on your body and your mind at the same time – the rhythms are infectious and complex, Philippidis' guitar work is daring and unique. And, really – how many bands these days play songs that reference Thomas Merton?

The hour-long show contained old songs and new, mostly featuring music from the band's recent excellent self-titled release (seek it out – it's worth it). The music was filled with fire and an undeniable spirituality, without being overt or in-your-face. Still, when the band plays the Van Morrison-esque "The Other Country," Delopoulos sings at the end like a man in religious ecstasy.
And the audience was right there with him. 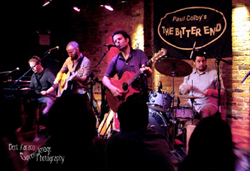