Amidst the upheaval and changes 2012 finds in the U.S., Purple Door Arts and Music Festival embraced local resources and time-tested values to successfully forge ahead.

Plummeting ticket sales told the promoters its August date was no longer working--too close to the start of school, too little money left to spend on summer fun--so the organizers moved this long-standing annual event back four months to catch young people before end-of-school activities over-stuffed their weekends. They moved it indoors to the Lebanon Expo & Fairgrounds, an impressive county fairgrounds complex to dodge predictably bad weather. They stayed true to their apparrant calling to reach the disenfranchised and the results were very satisfying. 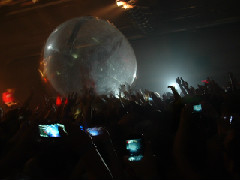 Skipping the standard CCM headliners, the lineup stretched between hard core and funky Americana with crunk specialists Family Force Five as the top headliners. The art portion was reduced to one wall covered in butcher paper with Sharpies on strings for audience input, and personal appearance statements - the only people out of place were those that were trying to conform, but both were enthusiastically embraced by the audience.

The Main Stage saw As Hell Retreats, Gideon, My Heart to Fear, Sleeping Giant, Project 86, Abandon Kansas, and For Today thunder through before the FF5 finale. Each brought their own unique take on loud and on fire for Jesus. The Sleeping Giant prayer circles after the set being one noticeable distinction. Matt Montgomery as featured speaker put the For Today set in a different light as they prepare to appear at every stop of the 2012 Warp Tour. One stand-out was The Disciples from the Lancaster, PA Teen Challenge branch. Polished, heart-felt rappers with life lessons to back up their message written all over their faces and arms, theirs was a one-of-a-kind performance that can only be found here.

Meanwhile, throughout the afternoon, the LBC stage, sponsored by Lancaster Bible College, offered somewhat lighter fare in Allistair, Ocean is Theory, The Beggar Folk, B.Reith, Bellarive, Mike Mains and the Branches and House of Heroes. The expanded vendor area gave the bands plenty of space to greet their fans, learn about new causes such as cure.org, brokenbutloved.org, and Messiah College, Steps away outside, Undergroundskatepark.org had more onlookers than ever at their more convenient location, with plenty of helmets and boards anyone could borrow to give their challenging course a whirl.

Drenching spring showers cut short the skateboarding, but sheltering roofs kept everything rolling on. The highly polished floors in the heavily insulated rooms even found everyone sitting on them during Matt Montgomery of For Today's message - unheard of at recent Ski Round Top iterations of Purple Door.