Eisley - In Concert in NYC

The last train to Trolleywood runs through the valley, with Eisley providing the live music.... and we have the pictures to prove it.

The line that began to form outside of New York City's Bowery Ballroom sparked the curiosity of several walkers-by. 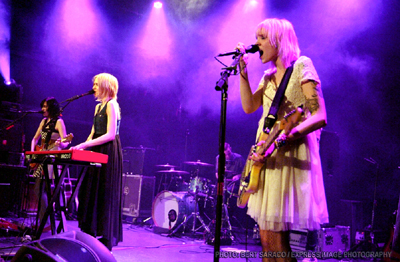 "Eisley." Once again - brevity is the soul of wit, according to Shakespeare – and we take our Shakespeare seriously here in the Big Apple.

"Oh, wow," said a mildly impressed jogger. "I didn't even know the Eisley Brothers were still together."

Okay, so Eisley – the Texas based surrealist-indie-melodic art-pop band made up mostly of siblings from the Dupree family – might not yet be the household name that the Eisley Brothers are, but they are still together – very together. If you don't believe me just ask one of the many rabid, hard-core Eisley fans like the ones that lined up before six o'clock even though the band was scheduled to go onstage at ten PM! And I'm not just talking about the pink and electric-blue haired girls in the crowd – there was a solid contingent of fans that ranged from Eisleymania-stricken teens to more seasoned mortgage-payers hoping they'd be able to endure standing for five hours or more on the floor space of the Bowery Ballroom waiting for the last train to Trolleywood....

Now if you're not already familiar with the band, the 'Trolleywood' reference produced a big 'huh?' - and rightly so. The group's early work certainly presented a quirky and fanciful way of looking at life – a wistfully optimistic world-view with just a hint of the surreal, the strange, and the magical. Contributing their own playfully baroque artwork to the packaging of their albums, the three sisters from Texas (Chauntelle, Stacy and Sherri) captured the imagination of every slightly off-center artistic type that came across their haunting, and yes, sometimes rocking, music. To put it another way – Eisley fans are a different breed from the crowd that follows a Brittany Speers or Katy Perry. 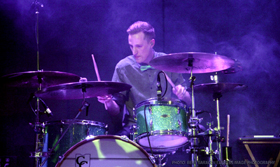 Eisley, currently on the verge of recording their fourth full-length album, delighted the crowd at The Bowery Ballroom, giving us something old ("I Wasn't Prepared," "Golly Sandra," and "Marvelous Things," from the first album), something new ("Lights Out," "Laugh it Off," "Deep Space," "192 Days," and "One Last Song" from the Deep Space E.P.) , nothing really borrowed (except maybe some vintage clothes) and definitely something a little blue, mostly in the form of several songs from The Valley. The girls have gone through a lot since their first album came out and it shows in the maturity of their performance Sunday night. There's more poise in their manner, more command of the stage, more willingness to fearlessly share the passions, joys, and sorrows of life - themes well explored in their recent full-length, The Valley.

Backed by the melodic, sturdy bass of cousin Garron Dupree, and the Ringo-meets-MuteMath drumming of brother Weston Dupree, Stacy, Sherri, and Chauntelle presented a strong set of solid rock and pop, unapoligetically sentimental, lyrically poetic, and musically strong. The post-Beatles quality of the songwriting is well-served by this five-piece unit which can get your head banging whle engaging your brain at the same time. Stacy occassionally will produce a guitar from somewhere behind her keyboard while Sherri sticks pretty much to rhythm guitar all night – both girls are the main vocalists, sometimes solo but often in tandem, producing a blend that only sisters can do. The two singers manage, through clever harmonies, to often sound like three, but a look at lead guitarist Chauntelle usually reveals that, although she is often singing along, it's usually off-mike. 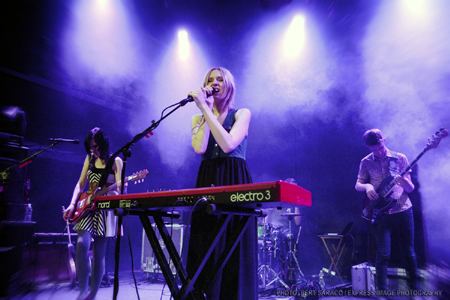 All five band members have grown into sure-footed, seasoned performers, obviously enjoying what they're doing. Chauntelle plays with passion, deep into the music, playing with style, economy and power while Sherri, on the opposite side of the stage, makes a strong emotional connection with the audience with her expressive singing and stage presence. In the middle, Stacy is the visual anchor-point and perhaps even a connecting element, supported by Weston and Garron at the 'center' of the band.

The wonderful, fanciful, unique rock music that Eisley fans have fallen in love with translates 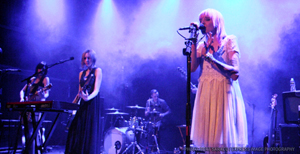 well to the stage. This family of musicians and yes, artists aren't out to make pretty sounds – they're here to make music – good, substantial music. Those that might've thought that the Duprees might run out of steam are wrong – it seems like they're just hitting their stide with great material and a satisfying live show. Whether it's Trolleywood or The Valley it's a great ride...