They create not only music, but a shared experience that brings thousands of strangers together like people that have just shared a unique, defining moment.

If you dropped a quarter it would've taken a little over two hours for it to reach the floor of New York City's Best Buy Theater last night. That's how tightly-packed the capacity crowd was and about how long it took for MuteMath to work its way through the massive 28 song set that had us on our feet – cheering, singing, and generally sharing a tribal moment. That's kind-of what the New Orleans-based quartet does on any given night of the Odd Soul tour: they create not only music, but a shared experience that brings thousands of strangers together like people that have just shared a unique, defining moment – and of course they have, because they've just seen MuteMath in concert, clearly an unforgettable show. 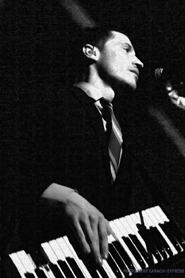 Not shy about risk-taking and transparency, MuteMath is a band that seems to never stop growing, evolving, and telling their story, sharing an artistic and spiritual catharsis with their audience. The introspection and spiritual inventory that runs through their work becomes a time of celebration and explosive joy worked out on concert stages night after night, and for a couple of hours we all feel the freedom, release and energy that can be channeled through their special gumbo of rock, funk, jazz and electronica.

Fat Tuesday came and went a few weeks ago but the members of MuteMath brought back an echo of it by entering the venue in their own little parade, strung lights in tow, from the back of the room all the way up to the stage where, preceded by a furious burst of drumming by Darren King, they launched into the title song of their current project, Odd Soul. The fun begins.

Unlike the back-to-basics intimate shows on the Odd Soul introduction tour, the full-blown show is quite a production, involving live, as well as pre-produced video images projected on a state-of-the-art 3-D stage set, dazzling light effects, confetti canons and, well – let's just say a few uniquely MuteMath-ish surprises. As high tech as some of the production is, MuteMath learned from their early days how to create an exciting show using materials you can pick up from Home Depot. This time around, things get very in-your-face with the help of a rubber raft, LED lights, and a heavy-duty rolling cart. You'll understand when you see the show – 'nuff said. 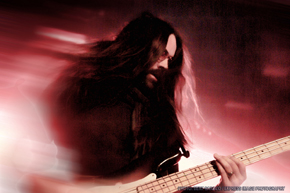 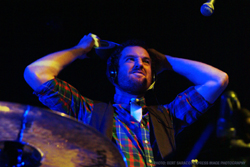 Musically, the band has never been tighter, funkier, or more soulful. With the addition of a real Hammond organ and new bluesier, funkier songs, Paul Meany (keys, vocals), Darren King (drums, etc.), Roy Mitchell-Cardenas (bass, percussion, vocals), and new guitarist, Todd Gummerman (Guitar, vocals, keys), seem to find a groove and work it in fine New Orleans style. The band seems less tethered to their samples – less concerned about sounding exactly like the recording and more into the idea of playing in the moment. The result is more breathing space, especially on songs like "Tell Your Heart Heads Up" and "Cavalries," allowing these fine musicians to stretch out and jam – an element that was somewhat missing in the past. When these four players set up a wall of funk, nothing can stop them. Sure, the physical antics are fun to watch, but we can always watch Ninja Warrior for an action fix ...these guys can play!

Interesting to note – especially for long-time fans – is the slight shift in stage dynamics that has Roy stepping forward (literally and figuratively) into a more evenly-distributed spotlight that had been previously (and understandably) dominated by the obvious charisma and physicality of Darren and Paul. The shift is subtle, but maybe having created so many of the guitar parts for Odd Soul and expanding his onstage performance to include some guitar, more vocals, and synth-bass has brought something out in the quiet brilliance of Mitchell-Cardenas that's translating in a more dynamic way onstage. Certainly, Roy is more animated in his performance than ever before, and is clearly enjoying himself.

A relative newcomer to the group, holding down the left side of the stage, Todd Gummerman has quickly found a place in the MuteMath mythology and has obviously found a place in the hearts of the fans. A multi-instrumentalist, Gummerman is equally at home on the keyboard as on the guitar and back-up vocals. Faithfully reproducing the familiar guitar parts, Todd still manages to incorporate his own approach and escapes the trap of slavishly imitating previously established licks. Todd's subtle, tasty guitar playing on the bluesy "You Are Mine" hint at the depth of what he's got to offer. Even though the gap between the introduction tour and this full-blown show was not very big, Gummerman has obviously become much more comfortable with the music and the stage, often moving closer to the middle of the action instead of being 'alone' on the side.

Darren King mans his drum kit at the opposite end, playing dervish-like: frenzied, passionate, ecstatic, furious, seemingly-impossible patterns and barrages of percussion just as likely to stop-on-a-dime as they are to explode into a sudden cascade of sound. King, at any given moment, might stand behind the kit, jump out of his seat and play from any number of positions. At a MuteMath concert all manner of mayhem is expected from King's side of the stage and he certainly delivers.

The ultimate charismatic front-man, Paul Meany performs as if there's no barrier between himself and the audience, and in fact he does his very best to make sure that he breaks down any barrier that a venue tries to establish. Seemingly just as much at home in the middle of the crowd as behind the keyboard, Meany manages to leave the stage at least a few times during the show, always finding his way back without missing a note. At the Best Buy Theater, Paul was in excellent voice and in fine form on the ever-growing array of keyboards – but never more-so than when he tore into that rich Hammond organ and did some impressive soloing.

MuteMath is a band that simply must be seen in concert. Yes, they're loud ("Plan B" certainly had some 'white noise' moments) and the energy and spectacle are impressive.This is not to say that the music alone isn't the star – it is. There are few groups that I can think of that have managed to portray the tensions between the flesh and the spirit, the intellect and the soul, and even technology and old-school funk as well as MuteMath has in their music. But, folks – what a show these guys put on! You need to see these odd souls do their thing at least once. 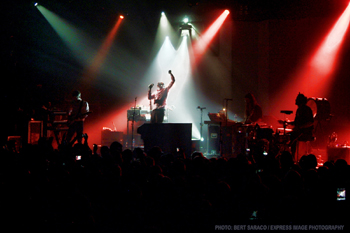 Tell Your Heart Heads Up