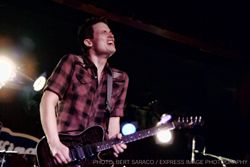 New York City's Times Square is one of the most vibrant, colorful, brightly-lit spots in the world – an ironic setting for music that's usually associated with smokey, dark little venues. That's where BB King's Blues Club is located, though – and ON this Wednesday night in February there was no better place to find a funky room full of blues, courtesy of the best of the young new-wave of blues players, Jonny Lang.

Lang and his band ( Jimmy Anton on bass, Akil Thompson on Guitar, Dwan Hill on keyboards, Barry Alexander on drums, and Jonny's sister, Jessie, on back-up vocals) delivered a two-hour set of rock-tinged blues flavored with hints of gospel and occasional brief nods to pop. The band was tight and as funky as they wanted to be (which at times was pretty darn funky), respecting standard blues formats as diverse as Delta and lounge, and venturing into experimental territory in some of the soloing.

A guitar prodigy (Lang began recording shortly after his thirteenth birthday), Lang's technically-sound but down and dirty approach to playing leaves plenty of room for free-form improvisation within the blues format. Sticking to Les Pauls and Telecasters, Lang alternately spits out tightly-constructed riffs and screaming, wailing, stretched-out phrases, his face registering all of the pain and passion that he coaxes out of the instrument. Capable of vocal scatting along with his dazzling guitar work, Lang's fresh-faced look and obvious youth make his old-soul approach somewhat shocking. His soulful vocal delivery, whether soaring into a falsetto riff, growling out a gospel-flavored line, or passionately phrasing a lament, is almost startling considering the fact that Lang is what might be described as ...well, a young white kid. One thing is for sure – this is, at heart, all about the blues. 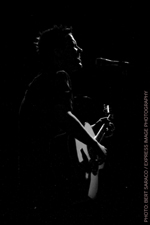 The music does all of the talking. Except for some necessary thanking of the audience and introduction of band members, Lang keeps between-song stage patter to a minimum. The facts of his difficult years, drug and alcohol abuse, and subsequent spiritual re-birth are there in the music, and especially the delivery.

The band's performance was a balance of passion and ability, with intelligent, fiery soloing from everyone involved. You can't adequately describe the energy infused into the performance – the live experience is the only real way.... A fairly accurate set-list: 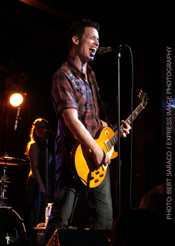 Don't Stop for Anything

On That Great Day

Livin' For the City

Bump in the Road

The band was smokin' hot through the whole show. Each member turned in impressive solos on Lang originals and took us to blues-church on Stevie Wonder's "Livin' in the City." Lang mentioned that this was the first time the band was back playing again after a bit of a lay-off.

If this is the band finding their sea-legs, just wait 'till they hit their stride.