Of course, that's the punchline to the classic joke about the tourist in New York City who walks up to a man on the street and asks the question, "How do you get to Carnegie Hall?" Evidently, the Annie Moses Band practiced – and they weren't alone.

Accompanied by The True North Symphony Orchestra and The New American Chorus, the amazing Wolavers (that would be Robin, Bill, and their six children: Annie, Alex, Ben, Camille, Gretchen and Jeremiah) presented a well-rehearsed program featuring everything from country/bluegrass ("Trail Mix"), to American Spirituals ("O Freedom"), to richly orchestrated inspirational pieces ("Raising Ebenezer") to the brand of Christian pop/jazz/classical music ("Glory Giver") that's most often associated with the Annie Moses Band. And speaking of pop music, there was even a refreshing audience participation segment featuring a unique treatment of "Pop Goes the Weasel" (sometimes you've just got to lighten up the mood when you're in Carnegie Hall)...

Frankly, I had some concerns about combining the Annie Moses Band (who I already know to be a finely-honed commando unit of an ensemble) with a choir and orchestra, not to mention several students from the band's Fine Arts Summer Academy (www.fineartssummeracademy.com), but my concerns proved to be unfounded when the concert opened with the Annie Moses Band walking out to the front stage position (backed by the assembled musical multitude) and launched into the powerful, energizing, "Glory Giver." Bill Wolaver's special arrangements for the evening augmented the compositions yet kept intact the integrity of the songs as we already know them. The risk here was that adding an orchestra and chorus might overpower and weigh down the songs, but Wolaver is as skillful at arranging as he is at playing the piano – and that's impressive, indeed. Combining these elements is a tricky task that has worked for and against pop and jazz groups (it's often been argued that Procol Harum, the classic rock group of "A Whiter Shade of Pale" fame, was one of the first to attempt this with any success), but the performance on this cold Saturday night at Carnegie Hall was definitely a success.

Of course, the 120 year old hall presented its own set of acoustical challenges, having a deep stage with an amphitheater-like dome – a wonderful 'chamber' for vocal ensembles and acoustic groups, but somewhat problematic for electric instruments and drums. The finer articulations of Javier Santiago's percussion were sometimes lost in the mix of the cavernous 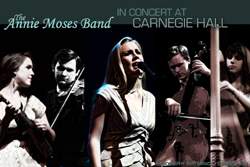 stage, rendering his 'pocket' occasionally a little hard to find from the audience standpoint. Santiago's wonderful work on the instrumental "Fiddlesticks" was, as usual, a crowd-pleaser.

The eight members of the Wolaver family (now joined by Alex's wife, Berklee on vocals), were in fine form. Annie's vocals and violin have never sounded more pristine and elegant, and her stage presence and energy were undaunted by the scope of the event. Alex's viola playing is passionate and energetic and his solo vocal performance is always a treat. Gretchen and Camille (on violin and mandolin, and harp and keyboards, respectively), manage to slip from instrument to instrument gracefully, while also providing back-up vocal harmony, along with their mom, Robin, and sister-in-law, Berklee. Ben, the most 'stationary' Wolaver on stage, plays his expressive cello lines to perfection, and the youngest sibling, Jeremiah, continues to impress on the acoustic and electric guitar.

The highlights were many, with "Ancient Paths" and "What Wondrous Love is This" spontaneously bringing the audience to its feet, and "Were You There When They Crucified My Lord" creating an almost palpable sense of awe, reverence, and majesty. It certainly was a special night at Carnegie Hall.