Over The Rhine in concert in NYC 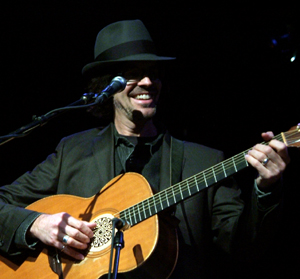 Over the Rhine took to the stage of New York's Le Poisson Rouge on a brisk but comfortable December night as a bass-less four piece ensemble. One would think that to be a risky move, and it probably is – but this is a band that never plays it safe. Their music exists somewhere between pop and jazz ...or folk and cabaret. Or something. Whatever it is, it's hard to define but wonderful to listen to. At any rate, going out without a bass player would normally be a problem – but not for Over the Rhine. They're used to stepping outside of the expected box, to the delight of their faithful audience.

After an enjoyable set by the California duo, The Milk Carton Kids (whose Everly Brothers-meet-Simon and Garfunkel sound, droll, self-effacing humor and solid musicianship won the respect of the audience), the members of Over The Rhine moved into place and immediately charged the atmosphere with expectation.

On this particular night, Linford Detweiler moved back and forth between the guitar and piano, ending up with more guitar time than normal. Linford also turned in some fine vocal work but the focus was, of course, on Karin Bergquist, who turned in her usual stunning vocal performance as well as playing some fine acoustic guitar. Jason Goforth went forth (sorry, Jason – I had to) and played some searing harmonica riffs and spacy lap-steel guitar while Nicholas Radina, stationed behind a percussion set, added extra vocal harmony and some tasty lead guitar licks while he wasn't hitting pieces of wood and stretched skin. 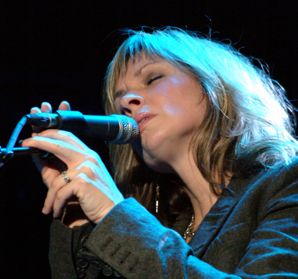 The excellent sound mix at Le Poisson Rouge served the four musicians well (even though, at one point, the kick-drum set off a sound-man's nightmare, causing Karin to explain that the band just 'exploded' for us) and the quartet performed a set made up of material from their current release, The Long Surrender, as well as some typically 'dark' Christmas songs and special requests.

The atmospheric textures of Goforth's lap-steel lent an exotic, sometimes orchestral feel to the songs, while Redina's percussion and guitar skills offered nice ornamentation to the bedrock piano and rhythm guitar work by Linford. Undeniably, Karin's exquisite voice and captivating stage presence are the centerpiece of the live show, as she brings to life the intriguing lyrics and melodies of the fascinating body of work that she and husband Linford have created over the years. Almost ethereal and bell-like on "Snow Angel," edgy and desperate on "Rave On," sensuous and bluesy on "North Pole Man," tender and confessional on "All My Favorite People," Karin's vocal dynamics and phrasing are unpredictable and always spot-on. Never sharp, never flat – often quirky, but always answering the need of the moment – a voice best heard in a live environment, where the danger of that vocal tightrope-walk fuel the atmosphere and make the rewards that much sweeter.

The hour and a-half (give or take) show ended with the aforementioned "All my Favorite People, " which contains the words, "All my favorite people are broken / Believe me, my heart should know / Awful believers, skeptical dreamers, step forward / You can stay right here, you don't have to go." And to underline the thought and bond the temporary community at Le Poisson Rouge on that December night, "Leaning On the Everlasting Arms" was briefly referenced by Linford on the piano, reminding all of us broken people that there was hope, even for the most skeptical of New York dreamers. 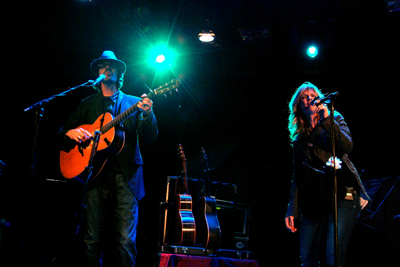 Over the Rhine is never more adventurous and satisfying than when they're performing live – this is a band that doesn't always play it safe. Remember what I said about not having a bass player? 'Didn't even think about it after the first few opening notes – and who would have thought we'd be hearing a down and dirty blues harp solo at an Over the Rhine concert?

But then again – why not?