A public relations director for venues that book comedians recently provided me with an epiphany when it comes to why many comics dislike it when critics review their performances.

Apart from already generally being a sensitive lot, stand-up purveyors rightfully detest their shtick being spoiled by indiscreet scribes offering up punchlines to readers who could also be potential audience members. With that in mind, I endeavor with this review to share my experience taking in a night of yuks elicited by an experienced purveyor of them, but to relate that experience in such a way as to arouse curiosity than reveal the upshots of jokes. 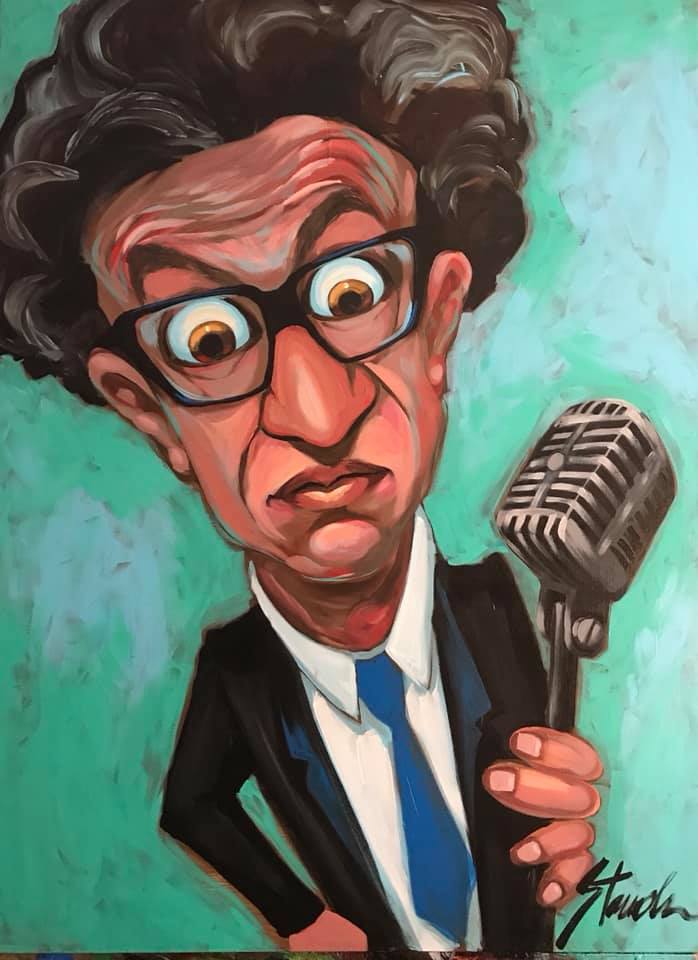 Ross Bennett comes to the stage looking comical. The shock of dark grey hair atop his noggin could have been coiffed looking to resemble the improbable lost brother to both quasi-scientist funnyman Professor Irwin Corey and boxing promoter Don King. Pictured with that manner of 'do and a bug-eyed look worthy of a Basil Wolverton or Joe Holmstrom cartoon on the poster. Regarding the poster hung in The Cup O Joy's window promoting his appearance, one young woman remarked to her friend waiting in line for the venue's door to open of Bennett, "There's that crazy guy!"

Once on stage however, Bennett's look is really the only zany thing about him. Though his appearance may denote metropolitan eccentricity, Bennett hails not from The Big Apple, but the rural enclave of Hornell in the western half of the state where New York City is the cultural epicenter. Life in that relative backwater provided inspiration for some of Bennett's bits.

But so did the conveniences and compulsive temptations provided by 24/7 retailers, contrasting parenting styles between his father's discipline born of military experience and the younger Bennett's softer touch with his son, the peculiarity of a sandwich he had at a locally famed hamburger joint and plenty else. In what may have been a seamless set were it not for the necessary interruption of the Cup's traditional passing of two conjoined coffee cans (and, added since I last visited the place, a debit and credit card reader) to collect money from the crowd for the non-profit space's upkeep and more for Bennett apart from what already had come in from early bird passes and reserved seat tickets, made himself out to be a sometimes-exasperated figure to which his listeners in Northeast Wisconsin could easily enough relate.

Among the sources for what seemed more feigned exasperation than the real thing is his childhood aspiration of becoming a preacher. That early career goal also inspired what may have been his most masterful routine. As he spoke of how he and his grandmother would watch his family's black & white TV to intermittently switch stations between the pro wrestling she preferred and his choice of Jerry Falwell's "Old Time Gospel Hour," Bennett impersonated a typically braggadocious grappler and fire-and-brimstone homiletics back and forth in succession several times over to create an unexpectedly cogent message between the two.

Bennett also broached the mechanics of his artistry in discussing what it takes to set-up a gag and his preference to start with the line that gets the laughs and work backward. He also reflected, as opposed to truly joking, about how certain things said to one audience may be heard as humorous while the same thing will be heard as earnest by other listeners. His example in suggesting that the political strife in the Middle East could be alleviated if Jews and Arabs alike would come to Jesus for salvation, he says, got chuckles in Manhattan while eliciting amen's in Flyover Country. That reminiscence was also the clearest witness to Bennett's faith that allowed him to be booked at the explicitly Christian Cup.

Speaking of explicit content, Bennett made the rare pronouncement of urging those assembled to not purchase his albums of stand-up available for purchase due to their apparently objectionable nature for most of those in attendance. Naturally then, he had nothing to stack on a merch' table after his two shows that night.

The implication was that he will have wares to shill next he plays the Cup. And judging from his reception at his debut appearance there, his return may be soon.